We had a 50% chance of rain and we got it. 50% wet in the morning and 50% dry in the afternoon. Haines remained overcast all day and the weather stuck to the 50%. Our scheduled neighbors did not show up but we had an ex Holland America Line ship with us in the Marina. So not a big ship but a former tour boat from Westours from the 1980’s.  A nice little boat from the days that our operations were still small and a 1000 guests a day in port (One ship the ss Rotterdam V) was a big day for the shopkeepers and the tours. The Glacier Queen I soon became too small and was then replaced with the Glacier Queen II.  Later on all the tour boats were sold and we are now just hiring for the season. I believe the current tour boats in the Lynn Canal are owned by the local tribe who basically runs the same tours as we used to do in the 70’s and 80’s. Especially in the days that Holland America did not call at Skagway but used a Tour boat, the Fairweather, to transport guests from Auke Bay near Juneau through beautiful Lynn Canal up to Skagway. Those guests did three days on the ship and then went inland. A similar number came the other way and then sailed the other 3 days on board. (For that we did not count arrival Vancouver as a separate day). So the good old Glacier Queen is still there and it looks that she is under re-construction as since last week her aft super structure has changed. 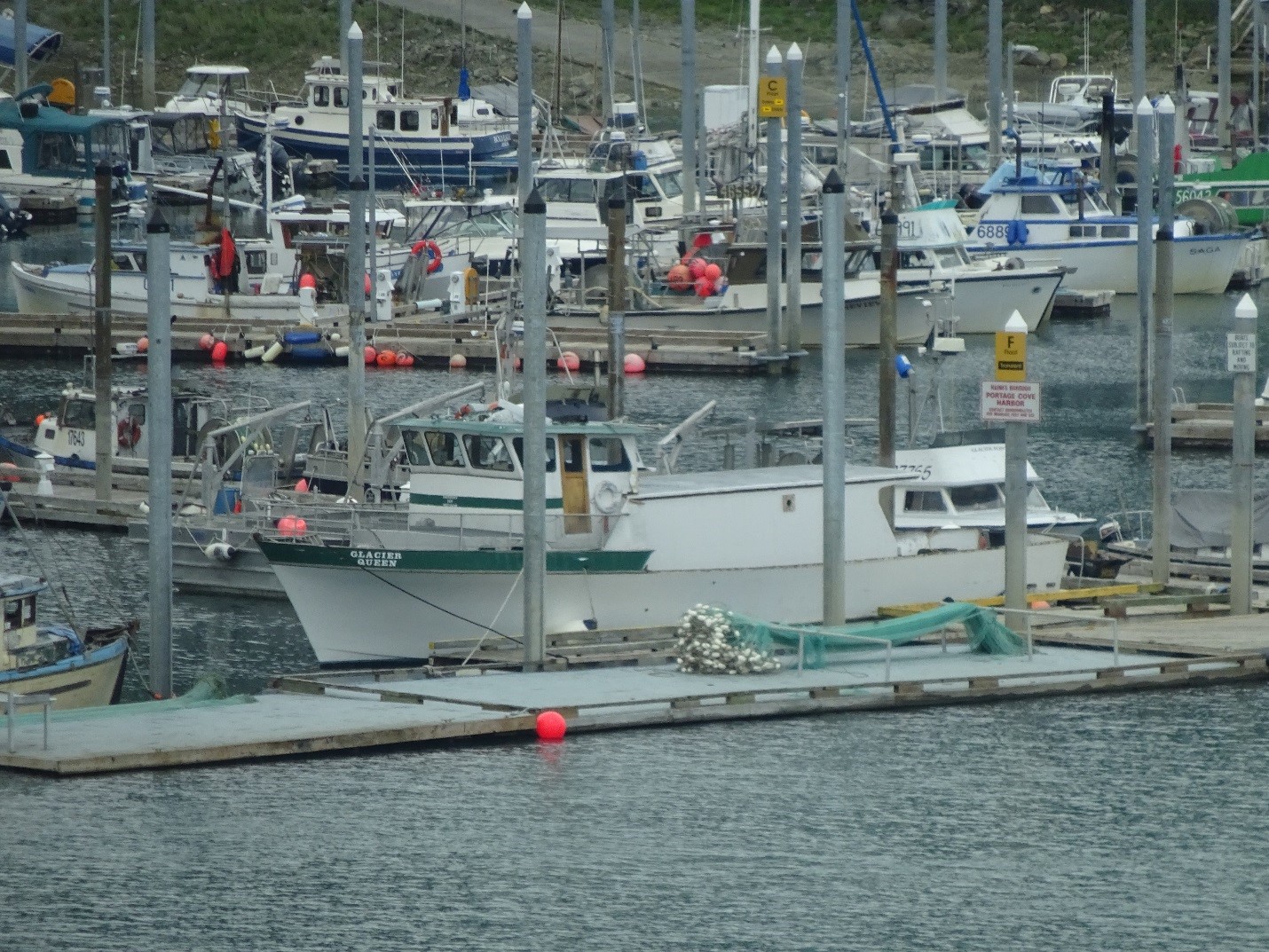 The ms Glacier Queen (I) in service on the Lynn Canal and related in the late seventies and early eighties.

We were having a drill day in Haines and that consisted of an Emergency Response drill (Gathering of the initial response teams) and a General Emergency Alarm (= everybody assembling at the lifeboat and life raft stations). Most of the time the First Response Teams are called to deal with a Fire emergency, but that is not always the case. The First Alarm is there to gather as quickly as many skilled crew as possible to offer a quick response to an escalating situation. Today that was an unconscious crewmember in a ships tank. Crewmembers dying in ships tanks is one of the major death causes in the Merchant Marine. There are about 62000 ships out there that go deep sea and it is estimated that approx. 500 crew die every year from entering a tank and then succumbing from fumes and/or lack of oxygen. All caused by not following (or not having or not knowing) the required protocols. 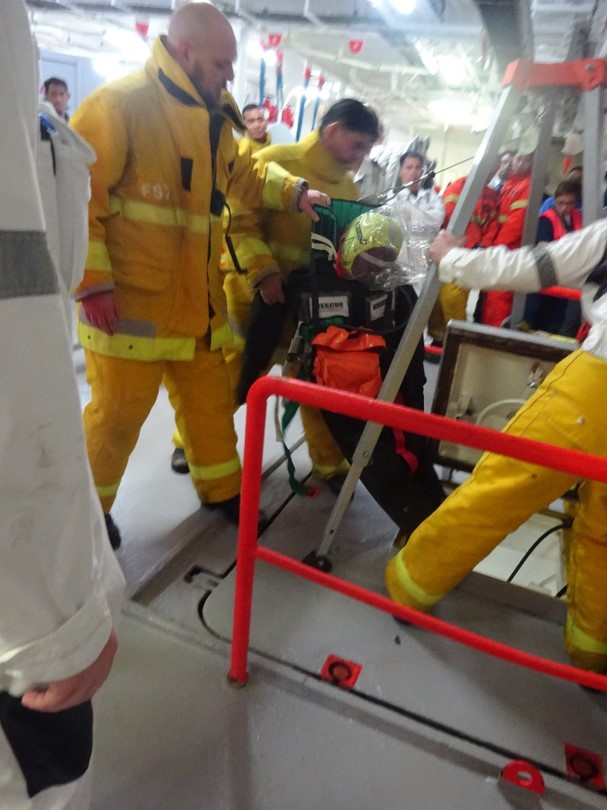 Mr. Dummy has been winched out of the deep tank by means of a tripod and is about to be handed over to Medical. The plastic bag over his head is an Emergency Breathing Device which is connected to the orange pouch in which there is a small air bottle.

If this happens then you have to get the person out again, hopefully quick enough so that he/she is still alive. For that we have a plethora of equipment on board. When asked by the Engine Room staff I try to set something up in the Bo ‘sun store. That is much bigger than a tank, but it has a small hatch to the deck below and then everybody can gather around and get an idea of what it is.  So we dropped Mr. Dummy in the tank, sent a rescue squad down with Emergency air bottles, put Mr. Dummy in a special medical harness (Neil Robertson stretcher) and winched Mr. Dummy out of the tank again. We do have all that equipment on board.

The General Emergency Alarm stage consisted of Life raft training and for that we do inflate a life raft. A training life raft that we ourselves can repack. (We cheat a bit as we do not have to keep the normally required inventory of food and water inside). The real life rafts stay in their canisters and are landed ashore once every two years and are then opened, inspected and repacked. That is work for specialists and we would need a lot of training to do this ourselves. So we don’t and we can’t as the rafts needs to be re-certified for the next two years by an authorized surveyor.

The life rafts would normally be inflated during an emergency so the occupants can step inside on the embarkation deck. If the ship would sink so fast that there was no time for this, then the life rafts would float free from their cradles once 2 meters under water. (Each life raft has a Hydrostatic Release which under water pressure clicks open and releases the securing straps) 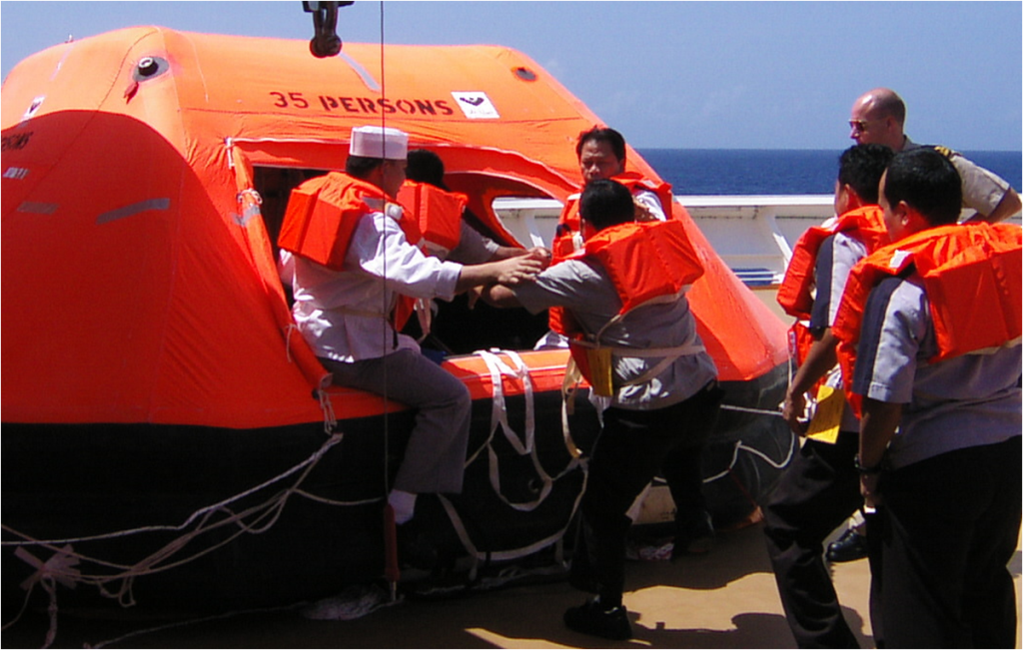 Loading a life raft. The Raft Commander and Assistant Commander sit astride in the opening and pull in the crew as quickly as possible and divide them evenly in the liferaft do it does not tilt to one side.

The life rafts are prepared by a launch team which is made up of Cooks from the Kitchen. We have four launch cranes with each six rafts. The legal requirement is for everybody to be off the ship in 30 minutes after the Abandon Ship Alarm has sounded, so the Cooks have to inflate, make ready for embarkation and then lower away into the water 6 rafts in 30 minutes. That is 5 minutes per raft, including 35 crew hopping in. We manage this but it needs a lot of training to reach that level of proficiency. Hence the reason that we have weekly drills.

Tomorrow we are in Juneau. And then we will not be alone as the Celebrity Eclipse, The Norwegian Jewel and the Carnival Legend will keep us company and the shopkeepers happy. Weather:  Overcast with a 60% of showers and 16oC /61oF but not much wind so it will not be chilly.