By the early morning the ship sailed above Cuba into the Old Bahama Channel. It was fairly busy with ships as the Windward Passage, the opening between the East point of Cuba and the West point of Haiti, is a very busy route to and from the Panama Canal. Four traffic flows meet here, as there is also traffic to and from the USA and the East Caribbean Sea including Puerto Rico. Since Recife we had not seen any other cruise ships (with the exception on those in port in Bridgetown Barbados) while at sea but now we met a few again. Most cruise ships leave Florida on a Saturday or Sunday and then they are past Cuba by Monday night. So now a steady stream of them coming by and speeding down towards the Caribbean Sea. Tuesday’s, Wednesday and Thursdays are the busy days in St Thomas and St. Maarten so by Friday they are all racing back again to Florida to end the cruise. For the Prinsendam with its long cruises and no steady home port that is a bit of an alien concept. We saw the Silver Shadow of Silver Seas and the Caribbean Princess of Princess cruises, they must have had a departure date out of the regular routine as well.

Because Old Bahama Channel is such a busy fairway, the IMO (International Maritime Organization) has introduced a few Vessel Traffic Separation Schemes (VTS) in this area. Short “highways” at Sea which mandatory separate North from South bound traffic, in those locations where the Cuban Coast angles away and the ships change course to keep following the coast. With opposing ships, both changing course at the same time, that can create a dangerous situation and hence these little pieces of Highways at sea. As there are no traffic cops around in this area, it depends on the professionalism of the seafarers on the ships……..and thus there is always one that does it different……… this time a tug and tow who was coming south in the northbound lane. Not dangerous as we saw the tug 15 miles away, but annoying as it makes the whole VTS system a bit of a mockery.

As this was our last day, we had this morning our crew farewell to the guests. This is part of the Cruise director’s disembarkation talk, during which he explains how the whole procedures goes for getting off the ship. As luggage has to be off loaded first and Customs is involved there has to be timing and scheduling. Also most guests use company transport to get to the airport or to a hotel and thus the groups have to come off the ship in the right sequence to end up in the right bus. Not everybody always understands that, and hence it is the job of the CD to make it all clear. The magic words are always: “Wait for your number to be called”. The number referring to the luggage tag number. At the end of this disembarkation talk, a selection of the crew appears on the stage, to sing a farewell to all the guests. On a regular cruise it is normally about 25% or so but on the longer cruises most of the crew show up as during a long cruise, the guests become friends and everybody knows each other by face. This time I counted about 250 of them and that is more than half of the crew. Where possible each crewmember was dressed up in something related to a theme night that we had on the cruise, or brought a piece of equipment related to the job. Thus nobody was amazed that a cabin steward brought his vacuum cleaner, the 4th officer who did the star gazing this cruise brought her sextant and the navigator was dressed up in paper charts. Not to mention the wine stewards with wine bottles and the cruise staff walking around with DAM dollars. 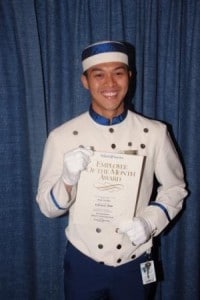 Mr. Putu, the fatest Bell-boy on the ship. The mail is delivered before you have written the letter.

I normally do not attend this farewell, as I believe the focus has to be fully on those crew who deliver the product, but this time after 70 days, I knew everybody.
Also I had a chore to complete and that was introducing the employee’s of the month of February and March. That is normally done during the Captains Welcome on Board reception but this 70 day cruise stretched over a three month period so we were two adrift. What can be better then to do it during the Crew farewell with most of the crew there? 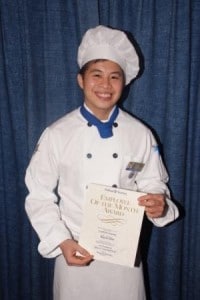 So we had: Mr. Putu Sartika from Bali for February. He is one of the Bellboys. This is his first contract for HAL and he was chosen because of his eagerness on the job, being a quick learner and for “running faster than his shadow. For March we had Mr. Carlfred Gonzaga, From the Philipinnes, one of the Cooks from the kitchen. Three years with Holland America and he was chosen for his enthusiasm and interest to learn as much as possible, hoping one day to be an Executive Chef. He became the father of a Baby daughter on January 18th. when we had just started our cruise. Such is sailor’s life.

Tomorrow morning, we will be at the Port Everglades pilot station at 06.00 hrs. There are no other cruise ships expected and thus I should be able to sail directly into the port. I hope to be docked by 07.00 and then get going straight away with the luggage. It is going to be a busy day as we are supposed to sail again by 5 pm. to start our next Grand Voyage to the Mediterranean and the Black Sea.