If you want to make it back to Fort Lauderdale in one sea day, then you have to leave Ponce at 1 pm and race full speed North of the Bahamas’ towards Florida and hope for nice weather. Nice weather so that the wind and the waves will not slow you down. That is of course not the right way to end a 70 day cruise and thus we are spending two days at sea. Instead of full speed, we are sailing with a sedate speed of 15 knots all the way. There are two routes that you can take to sail to Fort Lauderdale. The shortest route is staying in the North Atlantic Ocean keeping to the East of the Bahamas and then approach Fort Lauderdale via North West Providence channel, south of Freeport. The second option is via the Old Bahama Channel; going North of Cuba and keeping the Bahamian islands and the banks to the North; this route is 10 miles longer. Thus a number of things have to be considered. 10 mile shorter saves fuel but being in the North Atlantic makes the ship bounce more on the ocean swell. That slows the ship down and also makes the ride more un-comfortable. Important is as well which route bring the most favourable winds and currents, (I do like a free ride when I can get it or at least a push in the back for free). All these items are looked at and then I make up my mind.

In the end I decided to go for Old Bahama channel although it is a 10 mile longer route. However it had a lot of advantages:
1. Smooth ride. The guests need to enjoy the last two days and also packing is difficult with a wobbly ship. The Bahama bank stops the entire swell of the North Atlantic.
2. Wind and current will be with us all the way in the old Bahama channel, while there is adverse wind predicted for today north of the Bahamas’.
3. I will get a free push from the Gulf Stream from 0100 in the morning on the 24th. and depending on where the axis of the Gulf Stream is located that could be up to four knots.
4. It is an easier approach to Fort Lauderdale. The ship will not have to cross the Straits of Florida battling traffic and going against the current. The ship is going with the traffic flow and with the current and will only have to slow down in time. Much easier for the navigation and in principle safer as less cross traffic situations will be created. 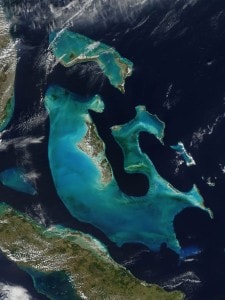 The Bahamas from the air and Old Bahama Channel separating Cuba from the banks. Photo found somewhere on the internet. Apologies if it belongs to somebody with a copyright.

I expect that I will have made up the 10 miles by noon today with the push of the current and the wind in the back and from that moment on we will be only gaining free mileage. For the guests nbr 1 is of course the most important as the cruise director has filled the daily program up to the brim with activities for the last two days. Plus there will be the evitable the end of the cruise. The last Bingo, the last lectures, the last bridge meeting etc etc.

That meant for me attending a number of “last parties” from the several travel agent groups we have onboard and for the rest these two last days are filled with clearing up paperwork. What normally happens in small doses after a 7, 14 or 21 day cruise, now come in big piles after 70 days. So I am sitting in my office with pen and ships stamp and a steady stream of people is coming by to have things signed off or getting that coveted stamp on a paper so that it can be “properly” filed or forwarded to wherever the paper has to go. A lot is done nowadays by email but a complete paperless society is still far in the future. There is still no all encompassing system that makes it possible to sign electronically each paper and form that is out there. At least not yet with the forms that we are using. Although the company is trying very hard and eventually it will happen that I can place a virtual stamp on everything that comes by on the screen.

The weather is great for tomorrow as well. A bit windy to the North of us but as we are sailing in the shelter of the Bahama Bank, we should hardly notice it.