Ponce is located on the Southside of Puerto Rico, just where the island has a little bit of an angle. That means that there is most of the time less wind than on the north side as the island provides a lee. That meant for us that on arrival it was wind still and that always makes things a lot easier. The pilot was nicely on time and as the approach channel is about 2 miles long and very deep, we sailed into port with 12 knots only slowing down at the last moment, when we made the turn towards our berth. Thus we were docked by 7 am. and I was nicely on time to receive the Custom and Border Protection onboard by 07.15 as had been arranged. However due to some communication muddle between them and the USCG they did not show up until 8 am. but at least I was on time. Still the clearing of the guests went fairly fast and a lot of eager people streamed ashore to inspect the town and surrounding area. For most of the guests this was a new place, as Holland America has not been calling here frequently and thus there was the excitement of something new. Feedback after departure was very good, so I expect that Ponce will become a regular port of call not too far into the future. 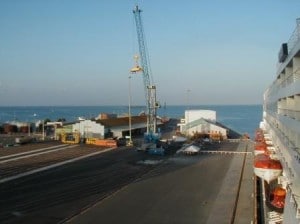 The dock does not look very impressive from a cruise guests point of view. But a shuttle trolley system and cheap taxi’s got everybody quickly into the more interesting area’s.

Ponce has always been a important port for Puerto Rico but in the last few years it lost out to San Juan for the regular cargo traffic. Still it is much better situated for traffic coming from the Panama Canal and it has a much more sheltered port. To attract traffic, the port authorities have constructed a new container terminal with cranes big enough to handle any size container ship and we docked today at that dock and very nice it was. Deep water alongside, good strong bollards and an un-obstructed walking area towards the terminal entrance. You could have held wheel chair races on the dock, so nice and smooth. There were no container ships in port but the port authorities are expecting that with the new infrastructure in place, the place will be booming in a few years from now. I hope so, as they put a lot of effort into it.

This cruise is now coming to an end. We will have two more sea days and then we are back in Fort Lauderdale. From all the guests onboard, 20 will stay with us for the next cruise, the 62 day to the Mediterranean and Black Sea. All the other guests will disembark and return home.

Apart from the guests there is also a crew change of about a 100 crew. That is nearly 25% of the ships complement. That means paper shuffling for all of us in supervisory positions. The main things are the final evaluations of all of those going home. The regular crew has ratings cards and the petty officers and officers have appraisal forms. The later are standard forms made by the company for each function onboard. Filling them out costs time and then discussing them with the person concerned even more. Still it is a necessary part of the work. These appraisals are setup in three parts. Objectives given to the person when his/her period onboard started and these objectives are evaluated at the end of the sailing period; then there is the regular appraisal section with about 50 items and at the end is the section with the plans for the future. What is needed to progress, courses to take, new challenges to face, tasks to prepare for etc. All the appraisals from all the ships are electronically stored on the company’s network. When a crewmember goes to another ship, the last appraisal can easily be retrieved for review and used as a tool for further improvement during that next contract. As a captain you sign off on all these appraisals. Most of the time it is just to ensure that they have been made but sometimes a captain’s review is needed and thus given. That took up most of my day in port.

With the setting sun we left Ponce and headed towards the West. We will sail through the Mona Passage between Puerto Rico and Hispaniola (the island that contains the Dominican Republic and Haiti) and then follow a course above this island in the direction of Cuba. The weather looks good and we should have two glorious days at sea to finish this cruise.