At 5 am this morning, we entered the Caribbean Sea, passing between St. Lucia and Martinique. From there it is one straight North Westerly course towards the Ponce Pilot station. I have set a 6 am pilot station time for tomorrow, so we can be docked by 7 am to facilitate the clearance of the ship. When in Puerto Rico, American Immigration rules apply again and that means that they will have to see at least all non American citizens. Also as the crew has not been to the States in the 90 day clearance bracket; all crew has to see the Custom and Border Protection (CBP) officials as well and that will take some time. So while the ship sailed to the North West the purser’s department was sending multiple files to the CBP for the pre clearance to ensure that it will all go smoothly tomorrow morning.

I promised a few days ago to tell a bit more about the engine room. Now the chief has repainted most of the areas, after all the dry dock work that took place, it is once again an Engine room to be proud of. So today a little tribute to those unsung heroes, you seldom see, or notice, except when the water stops or the lights go out. 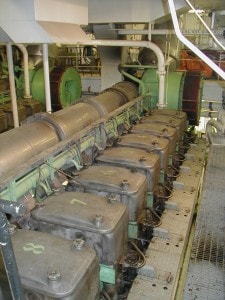 Overview over the top of Main engine Nbr 4. Wartsila sulzer type 8 ZAL 40S with the 8 standing for 8 cylinders.

The Prinsendam is pushed through the water by two propellers of 4 blades each which are connected to two engines via a gear box. The diameter of each propeller is 4.8 m or 16 feet. The diameter of the propeller shaft is 0.5 meters or 20 inches. When all four engines are clutched in onto the shaft a maximum of 4 x 7181 HP can be delivered and that translates in a maximum sea speed of 21 knots. If we need less speed, we run less engines and the ship can run on one engine on one shaft if needed. Then there are two bow thrusters of each 1300 HP and they get their electricity from one of the two shaft generators which are also connected to the gear boxes. Each shaft feeds one bow thruster. We also have a stern thruster, which is an azipod. (That means it can turn 360o) of also 1300 HP. and that is run by the starboard shaft. Then there are three auxiliary engines of each 4600 HP and they provide the electric power for the ship. 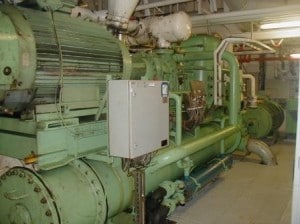 One of the four AC units located in the engineroom.

To control the temperature in the cabins and public rooms, we have four AC units which are providing chilled water with a temperature of 7 C. This cold water is pumped to all the different fan units in the ship. A fan unit consists of a cooler and a fan; the cold water goes in the cooler and the fan blows the air through the cooler and then to the cabins or public rooms. The power for these AC sets comes from those auxiliary engines. The ship is also equipped with two steam boilers and 5 auxiliary boilers that provide steam for heating (AC is not only about cold) and makes the hot potable water for use in the ship. Steam heats also the fuel which has to be warmed up to approx. 135o C before it can be used in the diesel engines. A lot of this steam goes to the potable water evaporators and the kitchens. 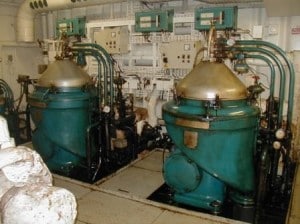 The oil purifiers. These are a sort of centrifuge where the heavy fuel oil gets cleaned, water removed, that might still be in the oil, before the heated fuel is injected into the engines. 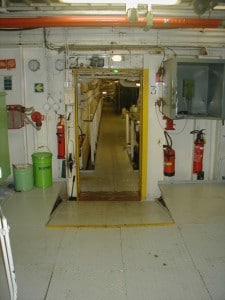 Then one deck up, deck 3, there is the Boiler room, the Auxiliary engine room and the work shops. Finally on deck four there is the Engine Control room, the Plumber store, day service workshop and the recycling centre where all the garbage is processed, recycled and or burned in the incinerator. 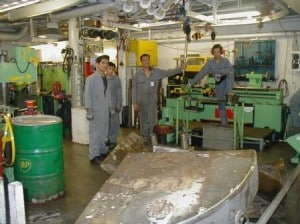 Some of the engine room staff in action. Here they are disassembling part of an old tank that has been replaced enroute.

As a ship cannot stop every day at a repair shop when something breaks down, a lot of technical parts are carried onboard, or even constructed by our own personnel. The more modern the ship, the bigger the challenge as with modern electronics, there are more and more items, such as print boards, that you cannot repair yourself at all. Also you cannot carry a spare for each component onboard. Hence one of the challenges is to order a spare part timely so that is it is onboard when needed.

Most of the engine work takes place behind the scenes and many repairs are never noticed by the guests onboard. Only when for a short while one of the services has to be shut down, (potable water, AC or toilets) people realize that not everything comes by itself. We always try to avoid this but things do happen, same as ashore. As a captain I have to totally trust the engineering department when I maneuver the ship. Sometimes I have to work on the edge of what the Prinsendam can deliver, as an example when we were maneuvering through the ice in Antarctica or leaving with wind force 9 from the Falklands. If the engineers are then not ready to deliver, what I need, then things can become dangerous. But they always do and thus we can sail on a safe ship going around the world.

With a thank you to Chief Engineer Jaap Wisse for reviewing this blog.

Tomorrow we will be in Ponce, located on the Southside of Puerto Rico. It is a new and upcoming port and hence a reason for the Prinsendam to go there.