As planned we arrived exactly at 06.30 at the pilot station and as scheduled the pilot stepped onboard at the same time. The Oceana was ahead of us with a pilot time of 0600 and she was just docking when our pilot boarded. By the time that we entered the breakwater the Oceana Pilot was going outside again to board the Grand Princess who had an ETA of 0700. Docked in port already were the Freewinds and the Braemar. Thus all the berths in the main basin were occupied with cruise ships, leaving only the bulk terminal, in the outer harbour, open to cargo ships. The Oceana had a change over day with 2000 guests leaving and 2000 guest joining. As P&O caters mainly for the British public, these 2000 come flying into Barbados with direct flights from England. The Braemar, from Fred Olsen, also caters for the British public but spends three days in port. The last day of the ending cruise; the change over day and the first day of the starting cruise. The Grand Princess was in Barbados just on a day call. 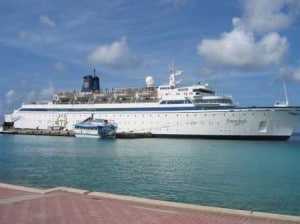 The most unusual of all was the Freewinds. She belongs nowadays to the scientology church and can spend up to seven days either in Barbados or in Curacao. Every time I see this ship, I see history in front of my eyes. This ship was built in 1968 as the Boheme and as such can lay claim to being the first regular, purpose built cruise ship for the Miami Nassau run. That little ship was at the start of this enormous cruise boom that we are now all part of. If she had not been bought by scientology then she would have been scrapped already I think but she is still out there and still providing services to the public.

We had something different going on today with training courses. We train for all sorts of things that we hope will never happen. However things can happen and thus we have to be prepared. One of those things is collision damage control. What to do and how to do it effectively if there should be unwanted ingress of water, water that wants to go somewhere we do not want it to go. The deck and engine department had a full day course where tactics and skills were learned how to work with plugs, beams to support sagging bulkheads, the sealing off of small and big leaks and the most efficient ways of draining water. We have onboard a complete damage control locker with a lot of equipment and wood pieces, readily available in case of an emergency. 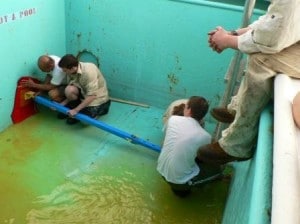 The objective of this excercise is, to blind off a hole in a steel bulkhead and keeping the blind in position by means of a pole that finds its support at the other side. As it has to go fast there is no time to weld or drill and thus it has to be wedged. Photo courtesy: 4th officer Pieter Zandhuis.

As we have a old crew pool on the bow, we could even do real life exercises with water poring in through various holes and pipes. Apart from it being instructive, a great time was had by all, as nothing is more fun than messing around with water. The instructor was really impressed with the real life exercises as he had never seen those done on another ship, but then the other ships do not have a crew pool. There is only one Prinsendam in the fleet after all.

We stayed until 10.30 in the evening, to facilitate a local limbo show and then sailed for our next port Ponce on the South side of Puerto Rico. We left in the opposite sequence that we had come in. Grand Princess first, Prinsendam second and the Oceana 3rd. 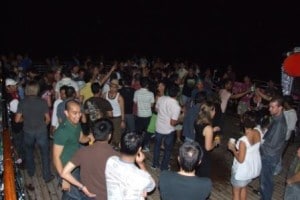 Except the Deck and Engine watches and the bar tenders still working, the whole ship was present.

For the crew I had something special in store. We are coming to the end of our 70 day cruise, which was preceded by a very intense dry dock. While we were sailing along the coast I could not throw a crew party as all the focus had to be on the guests satisfaction but tonight we could. So for one evening the new deck 9 behind the Ocean spa was for the crew. Food and disco. Everybody had a ball; I could say thank you for all the hard work of the past period and it was a great way of relaxing after so many days of constant striving for the highest quality. 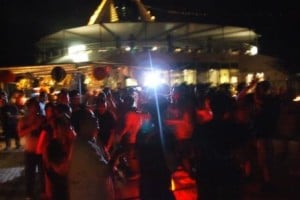 Dancing under the stars. Who says life onboard a cruise ship is only work ? 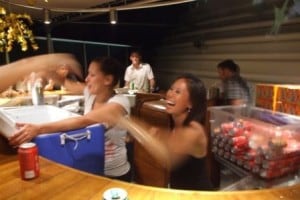 Bar duty was on rotation. Here we see one of the Ladies of the Prinsendam Revue playing bar tender.

Tomorrow there is a relaxing sea day while we enter the Caribbean Sea and head for Ponce.