Barbados is a bit of an anomaly as it is an island that is located outside the chain of Caribbean islands that rests at the crest of a moon along the Eastern rim of the Caribbean Sea. It is a pleasant anomaly though, as somehow the Barbadians managed to retain their own culture and way of life irregardless of the onslaught of the daily invasion of the cruise ships. I always find it a very pleasant island to visit. The stretch of ocean that we have to cross from Guyana to get there is rather void of ocean shipping. No major shipping lines cross our route and thus we saw very few ships out there. Only one tanker crossed our track line about 20 miles in the distance. As we tracked him, we could call up his name on the radar and as it is such an exotic one, I do not want to leave it out. Sonangol Girassol; with a name like that everybody pays attention when you call on the VHF. Although the flag was Nassau, Bahamas our best guess was that it was either an Indian or a Pakistani ship.

Here onboard we did something to day, that I had not seen before but that the Prinsendam invented during last years Grand Voyage. A MAJOR tour behind the scenes. Kitchen tours have been done on all the ships but a combination where also the crew mess room, the crew kitchen and the store rooms can be visited was a new twist. Guests had to sign up for this and over 300 did so. Then this morning they were led around in groups of 15 by Senior Hotel officers and things were explained. To my utter amazement it was not the kitchen that generated the most oh’s and ah’s but the crew mess room (…this is where my steward eat’s his lunch), the store rooms (……..plenty of booze left……..) and the florist store with the florist in full action. 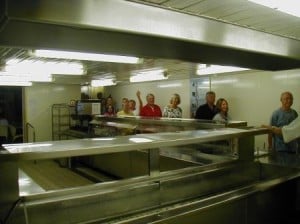 Here the guests walk past the serving counters of the crew mess on the way to the kitchen from the mess room. 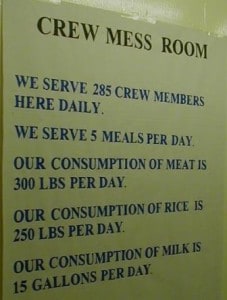 It is amazing the amount of rice that is consumed everyday by the crew.

The Prinsendam, although being the smallest ship in the fleet, has the biggest kitchen of all the ships. When the Royal Viking Sun was built, everything onboard was done by hand, including the mixing of the sauces as an example and thus vast areas were needed for each expertise. There is a kitchen in the Lido restaurant, on deck 11 (originally the kitchen for the Supper Club, later Royal Grill and even later the Venezia Restaurant) There is a large kitchen on deck 7, behind the dining room, that was and is the main serving kitchen and then there is a another large kitchen on deck 4, where all the preparation stuff was and is done. Prepared food then goes up to deck 7 with little lifts. Deck 4 was where the tour went today. 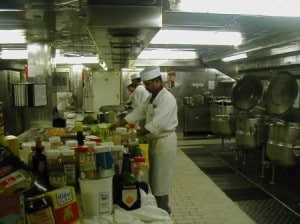 The soup kitchen in the beginning of the galley on deck 4. 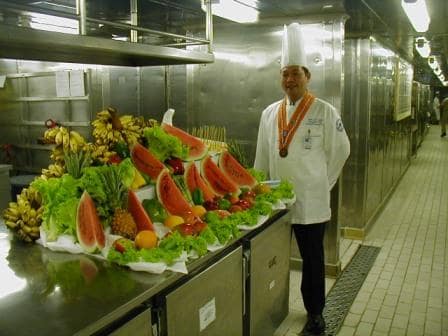 Executive chef Pedro Lontoc next to a vegetable display.

Guests came in via the crew mess; through the crew kitchen, into the main kitchen, past the bakery & pastry shop, past the butcher into the provision storing area, past the Florist shop and ended in the store rooms. Then it was the long walk back through the service corridor for which we had rolled out the red carpet. 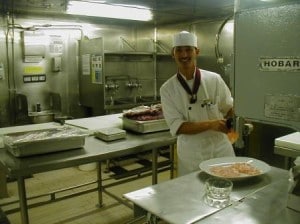 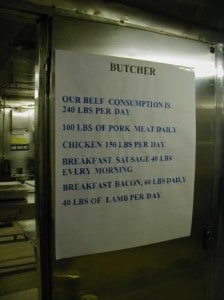 Also the meat consumption is quite extensive. 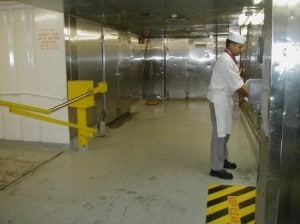 Store room area, everything is kept spotlessly clean and frequent handwashing is a must. 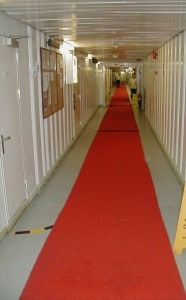 Rolling out the red carpet. Only that is good enough for our guests. The Prinsendam service corridor runs through the major part of the ship.

In the mean time the Prinsendam was heading towards the island of Barbados. Tomorrow morning I will be at the pilot station at 06.30 to follow the Oceana in from P&O followed by the Grand Princess of Princess Cruises. In port as well will be the Braemar and the Freewinds, who have stayed overnight here.

The weather is supposed to be good, if a bit windy and maybe a chance of a shower. We are docking at the south Breakwater and that means that the guests can use little buses to shuttle them to the terminal.