With the rising sun in the stern we approached the islands from the East. Going slowly as the water is very shallow here. There is a pilot that takes care of all the little harbors in the area but he had a pilot boat that would make bigger places very jealous. All the areas away from the homeland of France are treated equally as far as funding, medical and organization is concerned and so the pilot boat was of the same caliber as you will find in Le Havre or Bordeaux. Also he did exactly what I liked him to do; he pointed out the best anchorage in the lee of the island and then stood back and let me park my ship there. Both of us giving to the evolution the best of our mutual expertise. Thus we were happily and safely at anchor just before 7 am. There is a lot of wind and current around the three islands and the Prinsendam settled on a nice angle in balance with the force of the wind and the current and gave a good lee side for our tender operation. The pilot predicted that it would stay like this all day and he was right.

The ship anchored in the lee of Isle Royale, which is the main island. Then there is Ile du Diable to the north and completely exposed to the elements and isle Saint Joseph to the East. With the current coming around Saint Joseph, the ship was pushed to the west behind the anchor. The wind pushed on the port bow and tried to get it to the south. As a result the Prinsendam lay all day under angle just outside the influence of the swell that came in from the East. 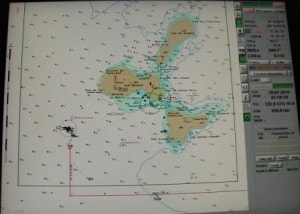 A snapshot from the Electronic chart with the ship stretched behind its anchor.

With the ship safely at anchor, I finally had the chance to carry out an extensive inspection tour of the ship, something I had not been able to do since going up the Amazon. A quick look here and there, yes, but systematically going through the ship deck by deck no. The chief officer has been battling with the elements to get the outside of the ship in order and a battle it is. With so many sea days, scenic cruising and strange port regulations it has been hard to keep up with outside maintenance and difficult to get ahead of the game. The day after tomorrow we are in Bridgetown Barbados and we are trying to arrange a good dock, so we can have a real go at it as we are there until late in the evening. Barbados rents out cherry pickers, so the sailors will be able to work on the upper levels of the ship as well.

In the bowels of the ship, the engineers were hard at work as well. A lot of work was done during our last dry dock and with technical stuff it seems that it takes longer to clear up dry dock work than to actually do it. However the chief could finally start with sprucing up his engine spaces and the foreman engine was really enjoying himself with recoating all the walking areas in new grey. I will focus some more on the Engine room tomorrow.

Departure turned out to be a bit of a puzzle. In the late afternoon a 2nd swell started to run around the westside of the Ile Royale and that was going to make it difficult to pick up our tenders. Two swells and strong wind, gave a puzzle to find a balance with the elements to provide a lee and preferably not running aground while doing so. 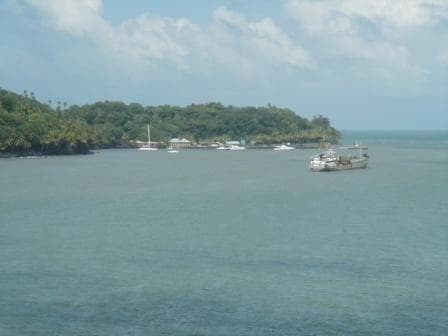 The little port as seen from the ship. The grey ship in the picture is a dredger normally used for keeping the harbors in the area from silting up.

We raised the anchor and within seconds the Prinsendam started to drift astern quite fast. The combined wind and current would have resulted in at least 3 knots of sternway had I not checked it on time. I swung a bit to starboard and we drifted towards the shallows in the south, I turned to port and we drifted towards the island. The latter maneuver gave a good lee side though. Thus that was the way to go. I calculated that with drifting towards the island I could give the chief officer 5 minutes with each tender for hook in and pick up. It worked out just right. While the first tender was being hoisted up I brought the ship back to where we started and then let it drift for a second time. Maybe a bit confusing to see for the guests but with two swells and a strong wind from three different directions, the elements were a bit confused as well.

We left for open sea, the same way as we came in. The route that we followed is the only part around the island that has been surveyed for depths and thus it is wise to closely follow the recommended track. Tomorrow we are at sea and the typical Caribbean weather is coming back, partly cloudy skies with a fresh breeze from the West.