We had a bit of a bumpy night and a slightly moving ship. What “slightly” was depended on the view of the guests as some spoke of a heavy storm and some dismissed it as an occasional “bump”. I have been assigned a cabin above the Azipods this time and the only thing I had to do was to move the coat hangers in the closet as they rattled on occasion. That is not a regular ships noise and thus it will wake me up. We did have quite a bit of wind during the night with gusts to over 60 knots but as we were heading into the first arrival of the storm, the storm had not been able to generate very high waves and thus the ship did not provide the roller coaster ride, something some guests had been afraid of.

Sailing into New York is always nice and although we started our voyage in the dark, by the time we passed Lady Liberty it was dawn and thus with the flood lights on and the first rays of the sun, the symbol of freedom shone as a blue beacon in the harbor. Same for the New York Sky Line, the balance between the artificial lights of the city and the natural light of Mother Nature gave the option for some nice photos. 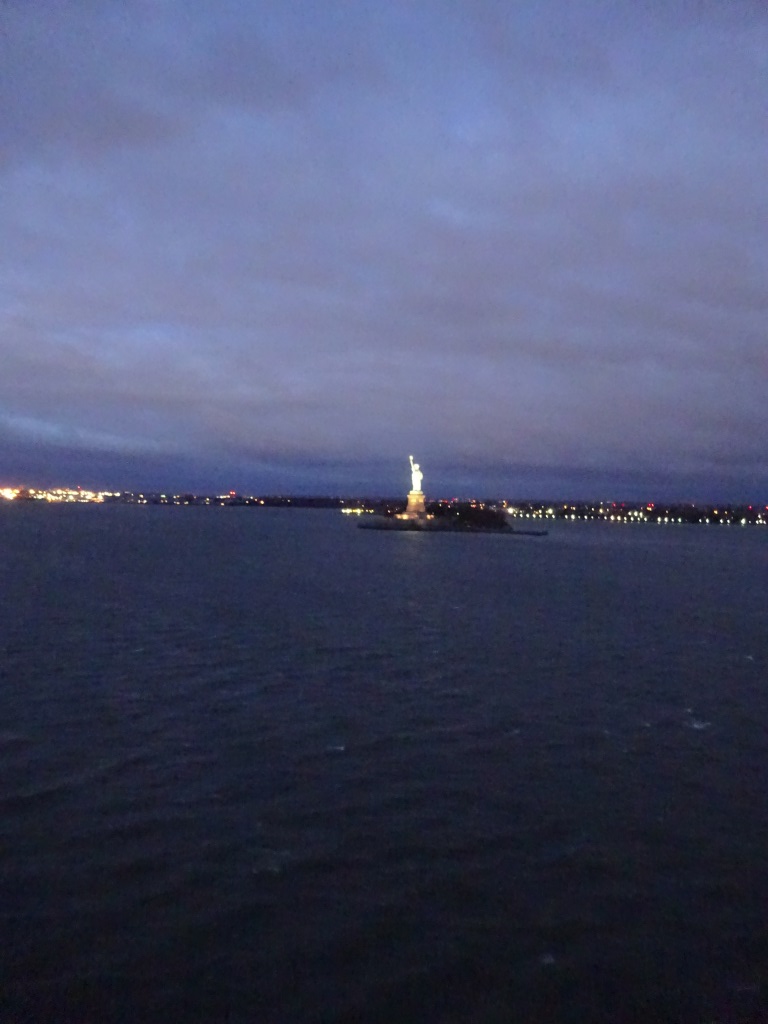 Passing Lady Liberty around 06.45 in the morning. Not a bad view while having breakfast.

When we go upriver the most important thing is the current, as we have to go into the slip on a 90o angle with the current in the Hudson River. Most captains try to arrive at slack tide (the change from ebb to flood or vice versa) when the current is close to zero as the drift is then the least.  We did so today was well and aimed our arrival time to be just before the end of the slack tide. In this case the moment of the end of the ebb.   The calculations are never correct to the minute as there are always local influences which cannot be planned for as they change every day. The wind factor is such an influence and how much it affects the tide & current depends on the angle of the wind and the strength. With Storm force winds outside it was expected that it would be windy inside as well; and indeed it was gusting up to 25 knots from the West to South West. Thus the captain had ordered two tugboats as insurance against bumping into the piers. In the old days the ships were so strongly built that with a bump they damaged the pier; now with the high tensile steel we use, the dock will damage the ship. (The steel is so flexible that it does not tear or rip open, it just folds around the penetrating body) 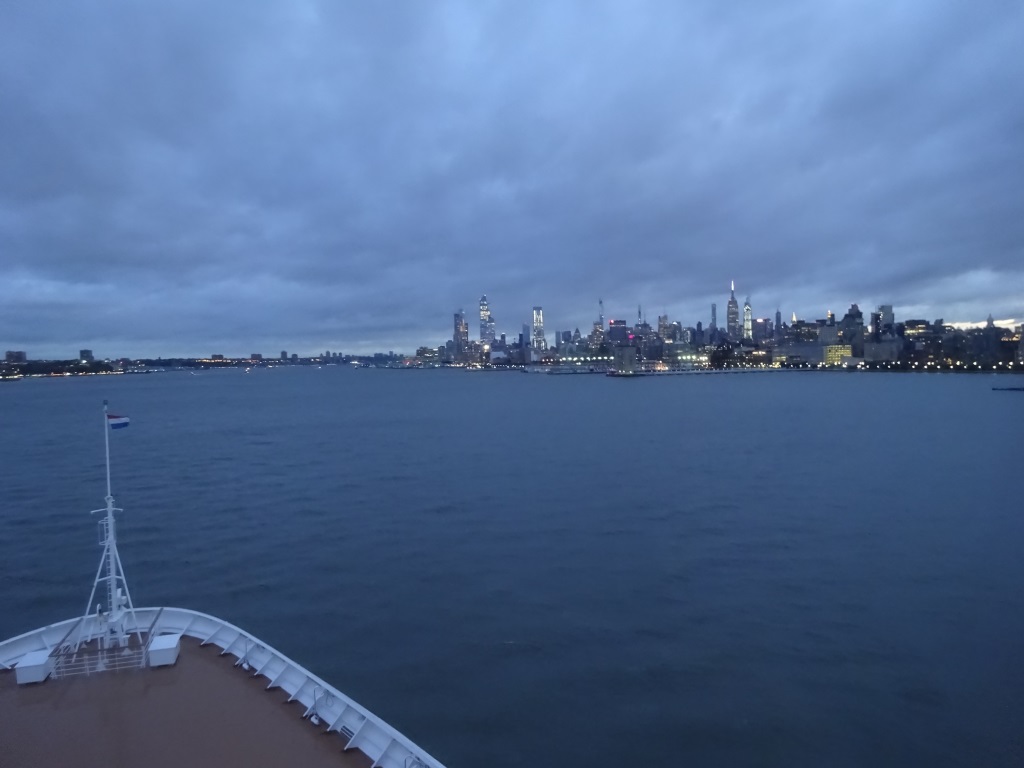 The Manhattan Sky line. In the foreground is Pier 40, the Holland America Line  terminal in the 1960’s.

New York tugboats, all owned by the illustrious Moran Company do not make fast with a rope, they push. And that is what happened this morning as well. When the docking pilot came on board to take over from the Sandy Hook Sea pilot, he brought with him two strong tugboats; one of 3000 hp. and one of 6000 hp. And he had one lined up on the portside and one on the starboard side. As it was still slightly ebbing the starboard tugboat pushed against the current while the bow thrusters of the ship angled the Zuiderdam nicely around the knuckle into the berth. This sort of maneuvering is not really a science. It is an art whereby the pilot anticipates – based on his experience- what the current and wind should do and then adjust with the tugboats the variation of what really is happening. By 07.30 we were safely docked at pier 90 North side while the Disney Magic was on 89 North side so we each had a whole pier to ourselves. 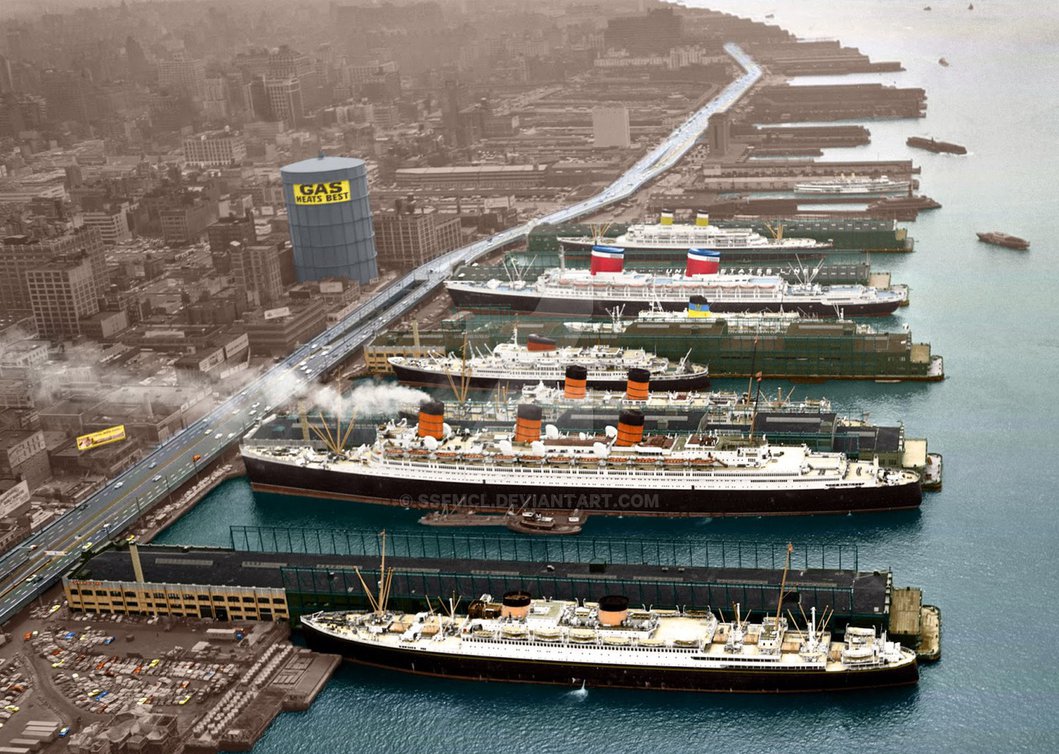 Ocean Liner row in the 1960’s. There are hundreds of these photos and post cards but I like this one as it was taken with the camera pointing down river and that is not so common. From bottom to top; Georgic (Cunard White Star), Queen Mary (Cunard White Star). Mauretania (Cunard Whit Star), Flandre (French Line) Olympia (Greek Line). United States (United States Line), Constitution or Independence (American Export Lines)

These two piers make up the cruise terminal of New York. Then there is another terminal in Brooklyn which is used by the Queen Mary 2 and other ships which are too large for downtown New York and then there is also a cruise terminal in Bayonne, which is only used by RCI as far as I know. The two piers are on top of older piers who once were part of the Ocean Liner row of ships stretching along most of the Hudson River on the Manhattan side. Everything starts small and in the 1870’s most company’s shared piers. With the increase of ships those piers became more and more expensive. Some company’s stayed but Holland America and also Hapag (Hamburg America Linie) moved to the other side, to Hoboken.  Cheaper to lease docks there and as most emigrants were not going to downtown Manhattan anyway, much easier for them as well. Holland America remained there until 1964 when they leased Pier 40 which was a new construction on top of older dismantled piers at the Manhattan side. That pier still exiss but with the conventional cargo ships disappearing the lease was not renewed and the cruise ships found a new berth at the newly built Cruise Terminal. 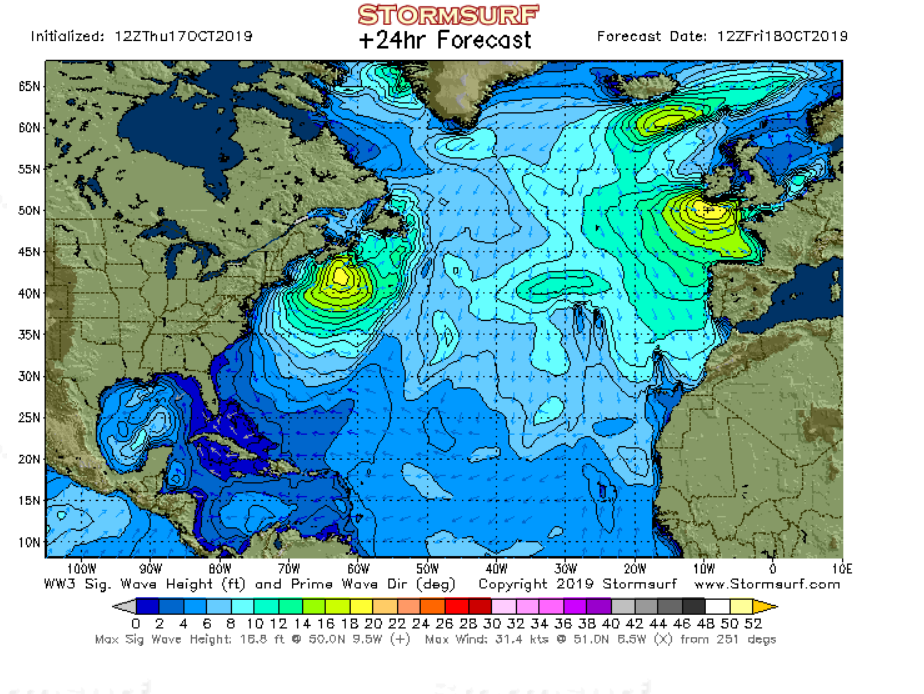 The weather chart for the next  24 hrs. The storm will move away during the late night and we are going south  and thus away from it as well. We will remain fairly close to the coast so we should be spared from too much ocean swell. (Diagram courtesy www.stormsurf.com)

We will now head south towards Fort Lauderdale where this cruise will end. This means two days of pushing against the Gulf Stream so the navigators will be constantly trying to find a route where the Gulf Stream is not so strong. The windy weather will abate during the coming night and then the forecast for Cape Hatteras and surroundings is quite good for the next two days. It is supposed to start blowing again there around 20 October but then we are already in South Florida.