By 10 am this morning we were at anchor at Newport. Further out than we really liked as the Riviera had the best spot because she had arrived earlier.  It was sunny but there was a strong breeze blowing, stronger than we had hoped for as the wind was only supposed to get really going in the early evening. Referring to my blog of yesterday: the weather was not really organized. Still the circumstances were good enough to operate a tender service and thus the ship got things on the road. We had even drafted in a local tender, the Amazing Grace and later another on, the Katharine, to cover the long tender distance as good as possible. Still it was slow going for a while, due to the tender distance but also due to the wind which forced the tenders to be extra careful. But still it worked.

I have not been very often to Newport but it is a sort of millionaire’s row as far as yachts are concerned, and there were a few whoppers docked around the port. Big enough that only the escort/ tender boat was pricey enough to buy me a new house. The amazing thing is that these really large yachts are also available for charter so I must assume that the owners have to run back ashore all the time to make more money so they can pay the mortgage on the boat. A lot of these yachts/boats (gin palaces in nautical speak) have been financed by a mortgage even if the owner has enough dollars stashed away somewhere to pay for the whole thing in cash. But that sort of finance thinking is way above my pay grade, I am already a happy camper by having paid off the mortgage on my apartment. 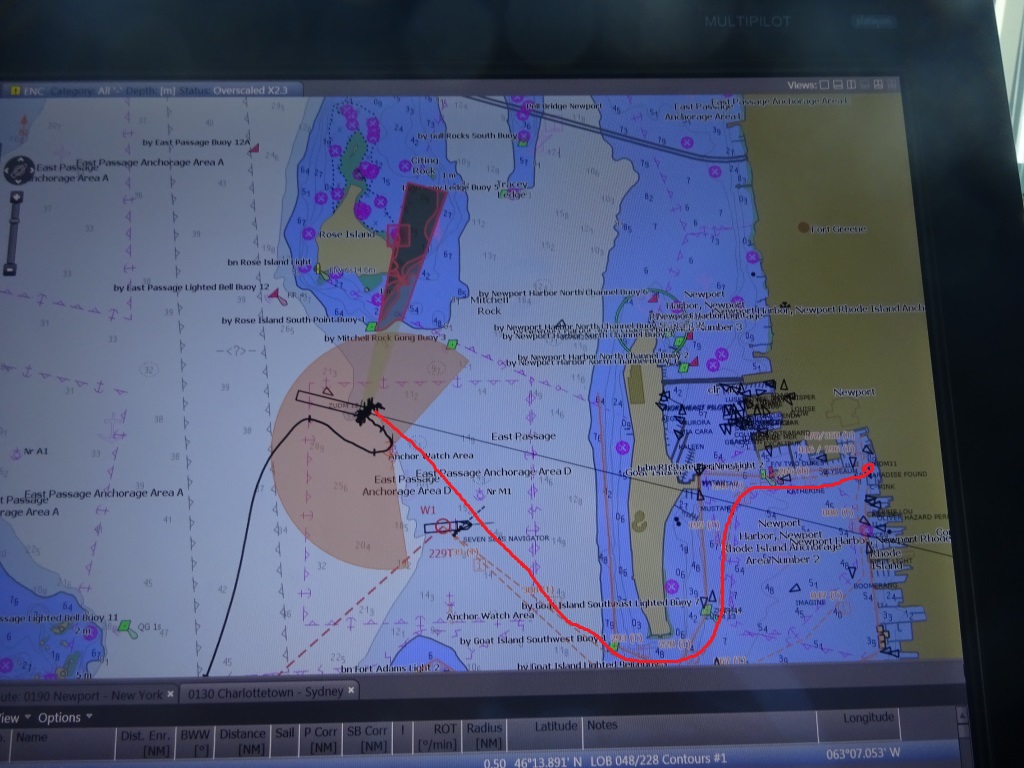 Newport anchorage area. The brown “moon” is the  boundary of where in the ship can safely swing. The red line is our tender track, a long distance as the tenders had to sail around Goat Island  the long vertical island protecting the marina area of Newport.

When I was here back in 2002, with the Maasdam, we anchored almost with the nose in the entrance, even closer than where the Riviera was today; all with the aim to reduce the tender distance. That worked quite well but what nobody on board knew was that in the grey mists of time there had been some sort of Army or Navy base here and they had been dumping a lot of stuff at what is now the edge of the anchorage area. Thus when we raised the anchor we also raised up a Model A Ford from its eternal slumber in the mud. A bit crushed and flattened but all four wheels and the tires still attached. One anchor fluke had dug itself through the engine and we had to drop the anchor twice to shake the A Ford off. In the course of the years I have dredged up quite a few unusual things but an Old-timer car has remained unique.

Another thing that happened here, in the same year, was that we had some fun with the USCG. It was just a year after 9/11 and the USCG still had a very elaborate harbor and ship protection scheme in place. I was and still am all for that, but the scheme called for zodiacs to race around the Maasdam at full speed maintaining and exclusion zone of 500 yards. Nothing against that in principle but the zodiacs made a lot of wake = waves while doing so and causing our tenders to bob up and down to such an extent that the embarking / disembarking process became dangerous. So we asked if they could slow down or go further away from the ship. The answer was that they had to carry out what was on the checklist……….. Never come between an officer and his/her checklist …………………….so I did not get anywhere. 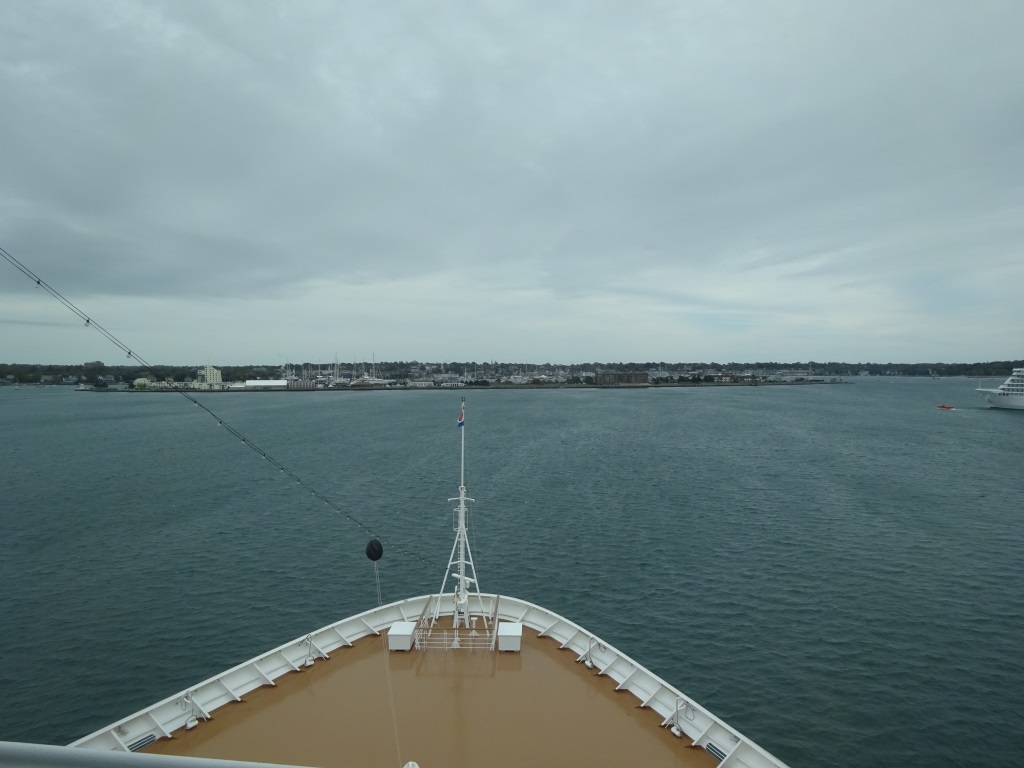 The shore line of Goat Island as seen from the Bridge of the ms Zuiderdam. Quite far away but we could not go any closer as there was that other ship.

Next step was asking the Agent if he could contact the USCG base and see if there was somebody with enough authority to overrule the checklist. What I did not know was, was that at that moment there was a USCG conference going on in one of the waterfront hotels just opposite the anchorage. ……….. and the man from the local USCG station was also there. Also there (as far as I was later told by the agent) was every USCG District Admiral of the USA and several where in earshot when the agent found his local Coast Guard person and started asking for help. All the stripes present ran to the window to see what was going on and they were really having a first row view of the “implementation” of the checklist. Again as per agent, the local Coastguard man was not a happy camper, when all who had stripes turned around and raised their eyebrows and not only that. Needless to say that the “checklist procedure” was quickly amended to include a no-wake part. For the rest of the afternoon all was well in the world and when the USCG boats escorted us out to open sea, I made an announcement to point out the good work the USCG was doing and they got a loud ovation from the promenade deck.

Tomorrow morning we will commence sailing into New York harbor by 05.00 hrs. and we should be docked by 08.00 at the Manhattan Cruise Terminal right across from downtown Manhattan. The terminal consists of two piers and is located where in the old days Ocean Liner Row used to be with the piers of Cunard, the French Line and other North Atlantic company’s. Holland America docked until 1964 at Hoboken and then later had Pier 40 a bit lower down the river so we were never part of this famous Ocean Liner Row. More about that tomorrow.

Weather for New York: it is not that far from Newport and thus it has the same weather as we have here. As mentioned yesterday a weather front with gale force winds will come over this area tonight with heavy rain fall. Thus the ship might move around a little bit, but we will hit the storm before it should bring too high waves to  the area, so I am not expecting  a roller coaster of a ride. By the time we get to New York that should all be gone but it is expected to be an overcast day and very windy day. Temperatures 15oC / 59oF.  I will stay on board as all my favorite 2nd hand bookshops have closed down as either the proprietors retired or went internet only.

Canada & New England, Cruises of the Past, ms Zuiderdam, Trans-Atlantic