The weather turned out to be as forecast although it took the wind a few hours this morning to get in synch with the predicted wind in the weather forecast. But by 10 am. it managed to do so and from then on all was well in the world. As a Japanese friend of my once said, things have to be organized and lined up nicely; otherwise you get confusion. Maybe that is why I have been going through life confused most of the time as the weather is seldom well organized and as a sailor you live very close to the weather.

But today we had nice weather and thus everybody must have had a good day. Although there is plenty to do in Boston regardless of the weather, a bit of sunshine is the icing on the cake for all shore excursions or independent activities. We were indeed the only cruise ship in port today so it was nice and quiet in the cruise terminal.  Boston has been working very hard in the last few years on improving the guests experience when arriving at the dock. Either by ship or when joining from the other side. The areas around the terminal have been cleared and step by step improvements have made to the terminal buildings as well. This time I was pleased to see that all the dock buildings have now been painted and show off some of the glamour they had when they were built. Some close to a 100 years ago. 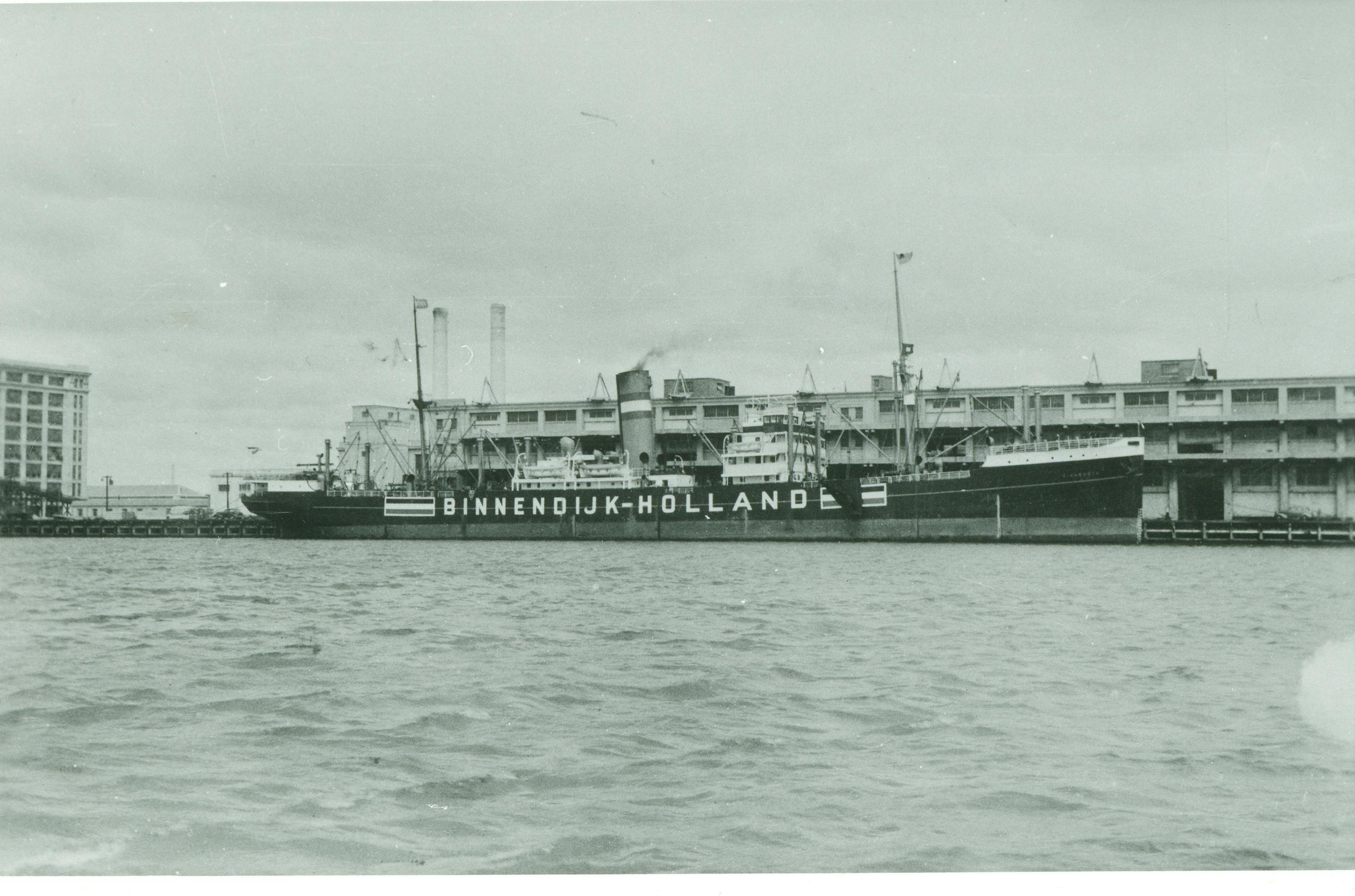 A photo of one of our old cargo ships, the ss Bilderdijk (i) from 1923. This photo was taken between September 1939 and May 1940 as it has the neutral lettering on the side of hull. The Netherlands was still neutral in the WWII conflict at that time and this should then avoid getting torpedoed.  The building to the left is still there.

Although we say the Boston Cruise Terminal, it was officially called the Black Falcon Terminal but the name has nothing to do with birds of prey. The terminal was named after a Norwegian merchant ship called the Black Falcon which caught fire on 02 November 1953. At that time the pier was used by the military and maybe they were so relieved that the burning ship did not blow up all the ammunition on the base that the name stuck until 2017, when it was renamed after a Boston Mayor called Mr. Raymond Flynn. But I have not heard anybody mentioning that name. In the sailors world it is still the Black Falcon terminal or just the cruise terminal. But then traditions among the seafarers only die  slowly. 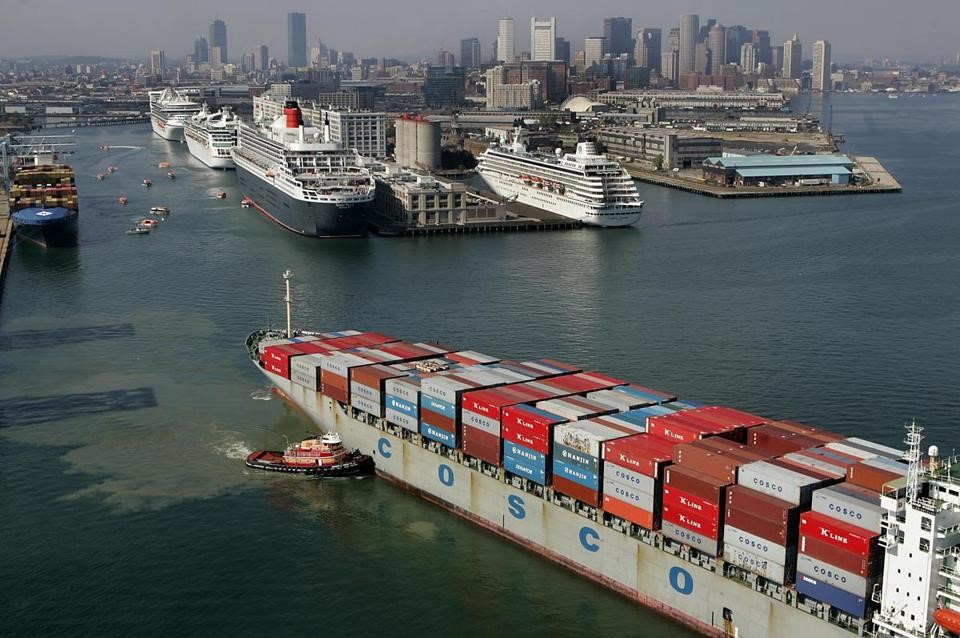 The Boston cruise terminal on a very busy day. I recognize a Princess ship,  one of the smaller RCI ships, the Queen Mary 2 on the corner and a Crystal Symphony ship to the right.  A chinese (COSCO) container ship is about to swing in the turning basin. The Queen Mary 2 has all her lifeboats down so maybe they had USCG inspection.  Behind the funnel of the Queen Mary 2 you can see the white building which is also visible in the  photo of the Bilderdyk (I) (Photo courtesy. Boston Port website)

.The cruise terminal was once a regular cargo and passenger terminal and the Holland America cargo ships used to call here before containerization set in. The latter is now also a success here in Boston and at the moment they are extending the container terminals which are located opposite the cruise terminal. There are other cargo docks, such as for the car carriers, but they are further into the port. The port is a sort of curve laying around the airport and Logan airport is of a never ending fascination to the guests on board the ships. In the morning, when we turn into the slipway of the dock, there is always a plane coming over as the swinging basin is in front of the entrance to the cruise terminal and that is right in the path of the descending planes. The pilots always call in, to ensure that the planes are informed that there is a big white or blue piece of iron sitting in the way with one or more funnels sticking out but we still often have a plane coming over just when we turn towards the dock.

When going out it is even more visible as for some reason, between five and six in the evening, there is a plane landing every 5 minutes or so, sometimes even every other minute. Then from the docking location you can see silver bird after silver bird making its descent. I always wonder what would happen if one plane would get a flat tire on the middle of the landing tarmac and would cause a traffic jam. I suppose that we would then see plane after plane aborting its landing and pulling up again.

Long Island Hospital overlooking Boston Harbor and Bay. (I took this picture from a website about abandoned places. Maker unknown)

Sailing in is quite nice, sailing out is even better as the port is then often full of small traffic and sight-seeing boats. We sail close by the local fort which used to protect the harbor entrance, going back as far as the Boston Tea Party days. What fascinates me the most is that when sailing out, your focus irrevocably gets drawn to an abandoned hospital whose brown bricks stand out between the green tree canopy (the leaves are also turning here, so it is not all green). It is sitting on Long Island and this island is indeed long and not very wide. Just google “Long Island Hospital Boston” and several sites will provide information. It amazes me every time again that a real estate agent has not yet put the most wonderful condominium building on the island as the views from there must be spectacular.

We sailed at 1700 hrs. from Boston and indeed had some amazing views when leaving the port. The captain has announced that tomorrow evening we can expect some trouble with a weather front moving in with gale force winds after 2000 hrs. so he wants to leave an hour earlier. A good decision as Newport Rhode Island is an unpleasant place to run a tender operation if the wind picks up too much. The tenders have to sail into the marina with on either side lots of floating – expensive- real estate, commonly known as gin-palaces, and you do not want to drift into them with a tender because of a sudden wind gust.  By leaving an hour earlier we should be able to be out of there before the winds gets nasty. That is of course if the weather predictions are turning out to be correct.

Weather for Newport Rhode Island: Partly Cloudy 17oC / 62oF. Gentle Breeze going up to stormy weather in the late evening accompanied with downpours expected after midnight.