It is a tight schedule to make if you want to get to Portland from Halifax at a decent time and we could not be docked earlier than 11.00 hrs. and we just made it; with only minutes to spare. A late morning arrival is nice as it gives everybody the chance to see the ship sailing in; and sailing into Portland is nice. People go to the Canadian Maritimes for the Fall foliage but you can also take a sightseeing trip around Portland Harbor as the woods around the natural inlet were a riot of color. Arriving later has a negative side as well, as we were coming from Canada and thus everybody had to go through CPB immigration inspection. How fast that goes depends on how many officers there are available for the clearance and secondly if the CBP Supervisor allows those who have seen the CBP to go directly ashore, while the rest is still being cleared. That can vary from port to port and in some places the CBP only clears the ship once everybody has been seen. Today there were sufficient Officers available and the guests who had been seen were allowed off. Kudos to the CBP. They did the job they had to do, but they worked with the ship to give all a guests a good first impression of Portland. The sunshine did the rest.

As mentioned yesterday I had not been to Portland since 2002 so I was eager to see what they had done to the docks. Back in 2002 we docked at the old docks and it all could be a hassle. So I was glad to see that some of the old docks has been torn down (the supporting stumps were still visible) and an L shaped cruise berth with a terminal building had been created. That dock was occupied by the Adventure of the Seas and the 2nd one was empty. We were at the 3rd cruise pier, The State of Main Pier, which was still one of the original docks but a very long shore gangway had been added which made it possible to put in a higher deck gangway and adjust for the tide. This long – low sloping – gangway was easily usable for ambulant and for rolling guests. It must be one of the longest shore gangways in the world that has been designed like that. For the rest Portland is easy, the town is just across the street, and with over 6000 guests coming ashore there were souvenir and craft stands everywhere. 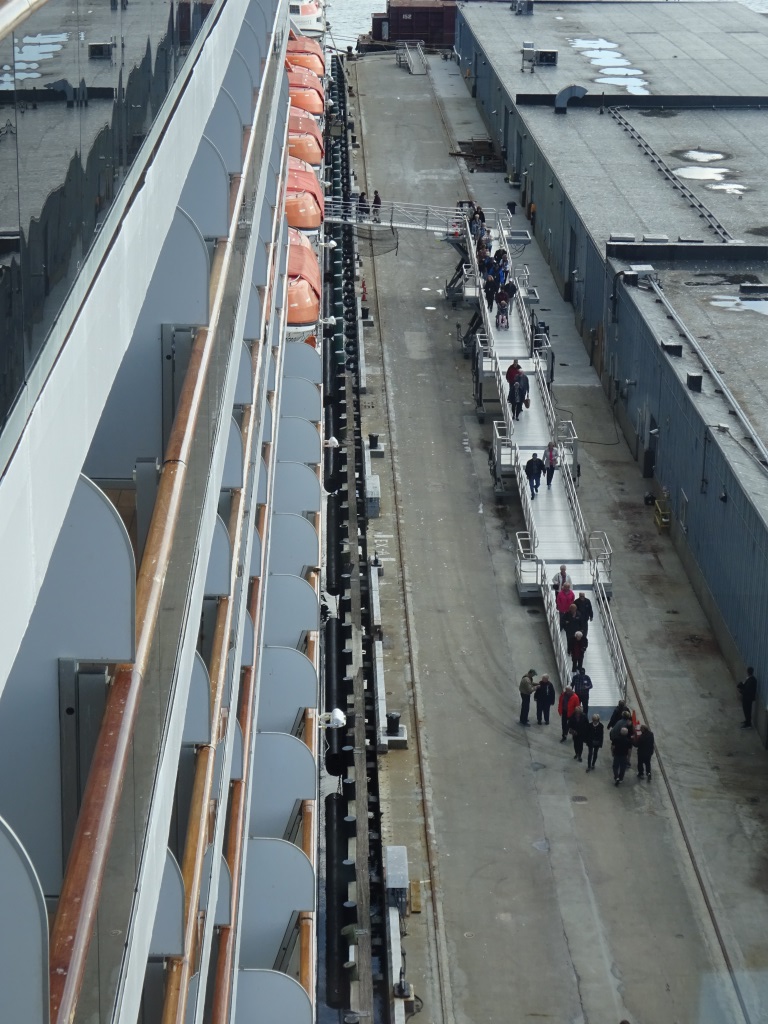 A very special shore gangway. I wonder how long it would take to roll down that ramp with a wheelchair at full speed.

Another point that must be unique, is that they have a sightseeing fire engine. Also a first for me, never seen that before. The tour is run by the Portland Fire Engine company and costs $ 20, — for a complete round trip and it stops right in front of the ship. It is a pity that their website does not tell anything about the fire truck itself. I know absolutely nothing about fire engines but looking at the photo I think it must be from the 1950’s. Something quite different than a Big Red hop on hop off Bus. For the rest there are a lot of tours available as Portland and surrounding New England are steeped in History. Tour options include a sightseeing trip in an old schooner, the type Portland and surroundings were famous for. I saw one coming by which looked similar to the famous Blue Nose which is part of Canadian heritage and is featured on their 10 cents coin. But seaside areas build ships that work for the seas they are exposed to, so a boundary between Canada and the USA here does not mean that the shipbuilding suddenly changes just because somebody put a dotted line on a map. 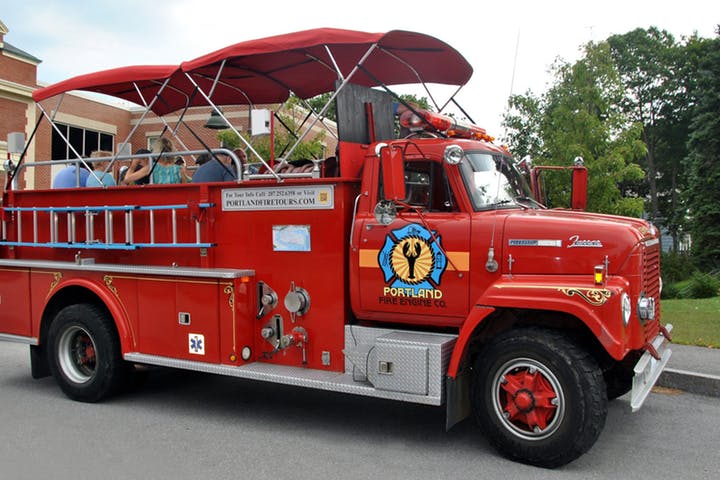 The local Fire Engine sightseeing tour. Cannot be very many of those in the world.

When we do the Canadian Maritime cruises, you have to find ports to visit when coming southbound. And then for New England there are only a few that will work for the larger cruise ships. Thus we have the option of Bar Harbor, Portland and Boston. With the Zaandam having cruised to Canada for most of the season, everybody had the chance to get to Bar Harbor hence the Zuiderdam calling at Portland Maine. With its deep-water harbor it attracts a lot of the larger cruise ships as it avoids the anchor-only option in Bar Harbor. Recently Portland even had the Anthem of The Seas in for a call and that is a 5000+ guest ship. Several ships called here recently while on their maiden voyage, e.g. coming over from Europe and that included the Scenic Eclipse (small but very posh), The Mein Schiff 1 (very German), and the Meraviglia from MSC which is a 4500 ship. Then in November it all dies out until the next year. But for Portland that still meant a 100 cruise ship calls this year, including the small ones and the large ones. 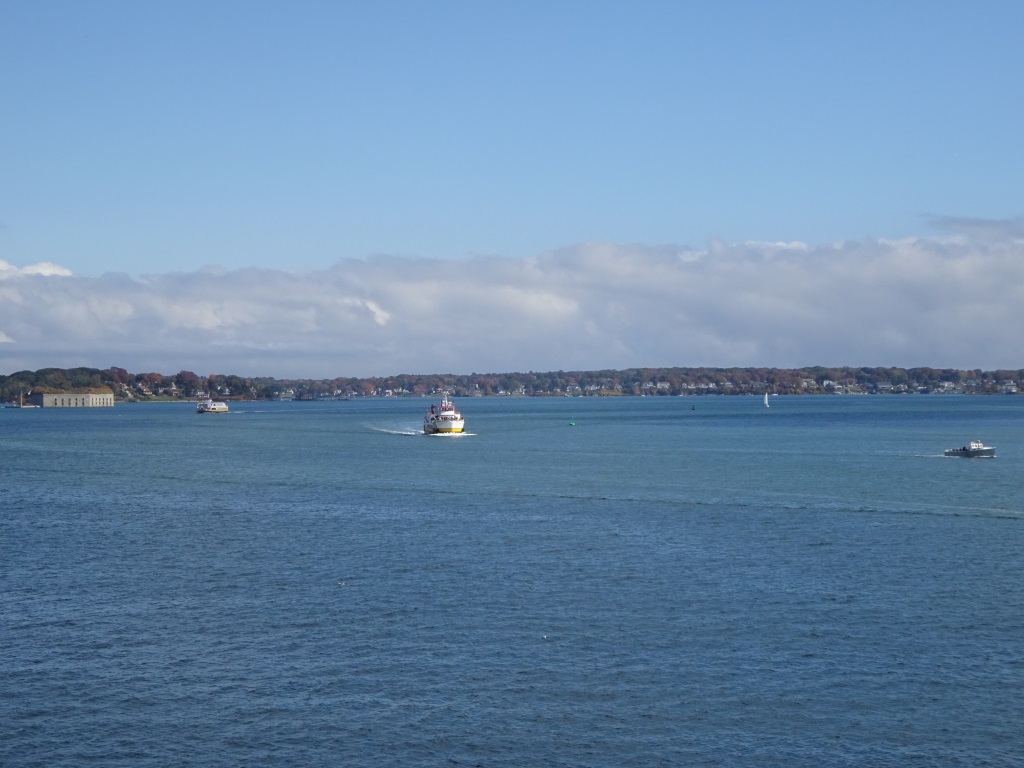 Portland harbor, which is a natural bay and has been of great strategic interest  from the days of the early colonies. There are two old forts protecting the entrance. As you can see the trees have changed their colors and a little ferry boat trip (center photo) shows it all.

We sail from here at 21.30 hrs. as Boston is just around the corner and there we will be docked there by 08.00 hrs. And if nothing changes we are supposed to be the only cruise ship in port. I have a lot of nervous sailors at the moment as tomorrow I will be the nasty examiner for their yearly examination in safe tender driving and safe tender operating procedures.  I don’t like sitting in a boat in cold weather but I think I have chosen the right port for the tender exams as the weather is supposed to be sunny all day with temperatures of 60oF or 16oC and a gentle breeze.