As was expected, the bad weather passing the New York area did not really affect us and the ship was travelling very quietly with no movement what so ever. And that is the way we like it. Cruise ship weather. It was not cruise ship weather completely as it was overcast but the winds were following winds and thus 18 knots less in velocity on the ship than what was really out there. Thus people could be on the outside decks with only feeling a gentle breeze while the real wind was 35 knots or so.

The guests were not affected by the weather but some animals were. I gave firefighting training in the morning on the aft mooring deck (so we can open up the fire hoses and spray to our hearts content) and the deck was full with birds. No doubt all blown off track by the storm and now seeking shelter on board and a bit of rest. Plus maybe a free ride to Fort Lauderdale.  In the past ships must have helped with introducing new bird species just by having un-expected hitch hikers on board who landed for a bit of R&R.  So they sat on the mooring ropes but also quite quickly figured out that if they flew up, that they could get food from the cabin balconies and one house sparrow returned to the deck with a rather large piece of croissant in his beak. Either given or pinched from the morning breakfast. The house sparrow is the only bird  I recognized as is looked like a Dutch “huismus” and all knowing google translated that as House sparrow. I have no idea what the other species were but see photo below. 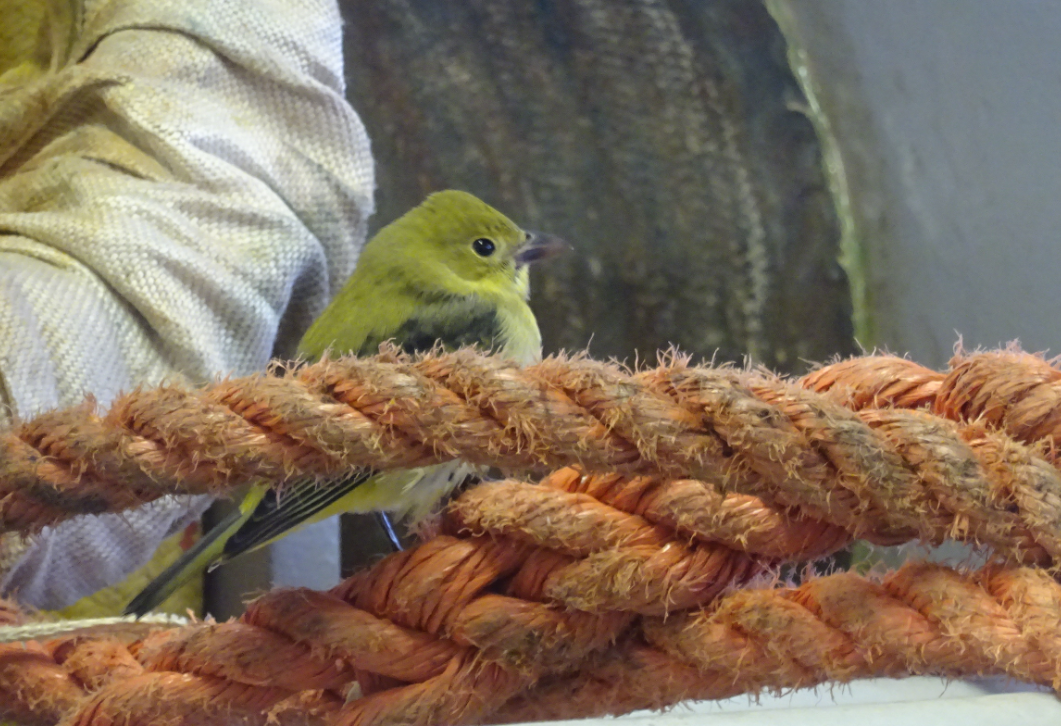 Yellow Birdie, happily sitting on top of the mooring ropes.

In this area we can only follow the coast as it is basically a straight line down to Fort Lauderdale. So for while we are clear of most of the opposing force of the Gulf Stream which runs with a velocity of 1 to 1.5 knots here. Not that much on a ships speed of 18 knots, but over a longer period, 24 hrs. x 1.5. = 36 miles which is almost 2 hours sailing to make up if we would not go faster to compensate. So if we can move away from this area, to an area with 0.5 knots adverse current; then 24 x 0.5 = 12 miles and that would only be 40 minutes of time lost or extra speed needed. The 10,000 dollar question  is of course where we go to avoid most of this current. The Gulf Stream moves about considerably and nobody has thus far been able to predict how it will move and when but scientific observations tend to be reasonably good for a 48 hrs. window. So maybe closer to the coast is an option or further away, but then you will have to travel extra miles to come back again. 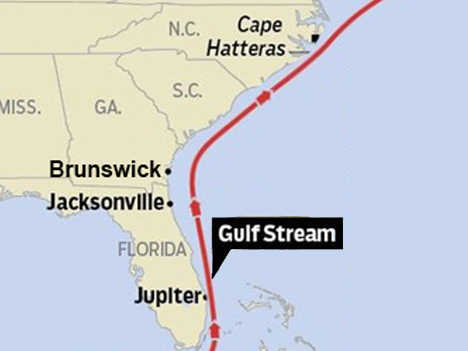 By the Time we pass Jupiter Inlet late tomorrow evening we will have 3 to 4 knots of current against us if the axis of the Gulf stream is close to the beach.

For the first stretch, NY to Cape Hatteras it does not matter as the Gulf Stream tends to bend to the east at the Cape and goes Trans-Atlantic. Reason why a lot of bad weather is generated at Cape Hatteras where warm and cold water comes together and the gale force weather fronts carried by the Gulf Stream (or better said “fed” by the Gulfstream) go over to Europe.  After Cape Hatteras it gets more complicated. But normally the Gulf Stream does not move too much over here as it is already quite far spread out. So we will sail a straight line down to where the Straits of Florida begin and then either hug the Florida Coast line or the Bahama Bank side depending on where the axis of the Gulf Stream (there where the most current is) is located. At the moment it seems to be laying close to the Florida side and thus we can keep our straight line.

In the mean time we have something else to worry about and that is another Gale. This time it is a weather front generated in the top East corner of the Gulf of Mexico and it is expected to cross Florida and then hit us in open sea. We are expecting 40 knots of wind but as it is coming from overland it will not yet have whipped up the waves so much that the ship will start jumping all over the place. Good news is also that this system will not affect Fort Lauderdale as it will move away to the North East; carried by the Gulf stream to Europe.

So the most crucial part of this Gulf Stream navigation will come when we get closer to Fort Lauderdale. Here the Straits of Florida are about 10 miles wide and if tomorrow new information comes in and the initial straight plan might not look so good, then the question will be, is going along the Bahama Bank worthwhile to do as the ship will have to travel 10 miles more. Time will tell.

Tonight and tomorrow morning we have to deal with this windy disturbance coming over from the Gulf of Mexico and then onwards it should be reasonable again. And we will have to get used to the warm weather again. Fort Lauderdale promises to be hot and humid…………………… 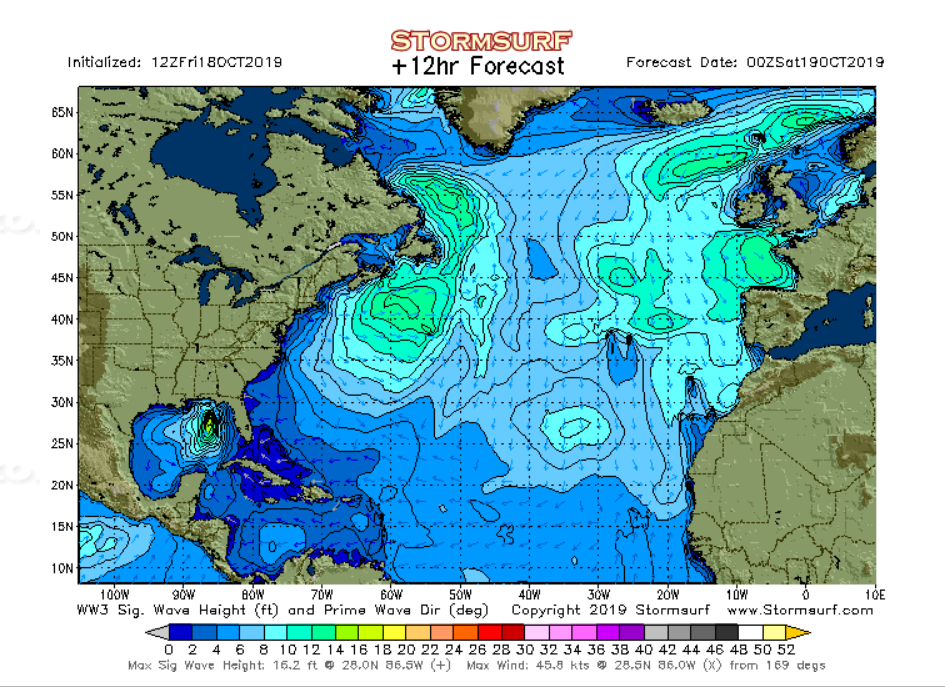 The weather map of today. This gives the wave height and that is what makes the ship move and thus the most important bit for us. The bad weather near New York will now start its crossing to Europe but is expected to pass to the North of Iceland with wave heights of up to 26 feet. West of Florida is a new disturbance which should tonight travel over Florida and enter in the Straits.