The weather system from the North East Gulf of Mexico came over during the night and by late afternoon we had some considerable rain and wind while the system moved over the Florida Straits. Looking at the USA weather forecast and reports it was not expected that this system would create much turmoil while going overland so hopefully that turned out to be the case. The area where the system was traveling through had been hit hard by a hurricane the year before and now they got a storm coming from the other side. Not much fun.

In the meantime the ship continued sailing south and going against the Gulf Stream. Just south of Cape Hatteras where the current starts to move to the East the ship went through the current and observed 3 to 4 knots of adverse current. Thus now it was known where most of the current was located and that gave the option to sail around it. Thus it was decided to stay on the side of the Bahama bank and then only at the last moment, tomorrow morning, to go across to Fort Lauderdale.  That is about 10 miles longer but if we would have followed a direct course, then for at least 30 hours we would have been looking at 2 to 3 knots maybe even more against us and 2.5. Knots x 36 hrs. = 90 miles. 90 miles we would have to compensate for. But with a 10 mile deviation and the low adverse current, we are looking at 0.7 knots x 36 = 25.2 miles + 10 = 35.2 miles extra. That is a big difference in fuel consumption. Roughly 28 tons of fuel versus 10 tons = 18 tons difference. A ton of fuel oil costs at the moment around $ 500 (https://www.oilmonster.com/bunker-fuel-prices), so the saving is in the region = $ 9000.  Worthwhile to spend a bit of puzzling time on, to get the best course.

Approaching Fort Lauderdale from the Bahama bank side is not a bad idea in any case. You have time to exactly figure out how the Gulf Stream is setting the ship to the North and then you can adjust for it nicely while slowing down for the pilot who boards about 2 miles outside the sea buoy. I have seen ships, who come up in the center of the Gulf Stream, make a 90o turn towards the port entrance and being completely set away. And then had to scramble to counter act for the current and stay on the track. If you are already lined up then you can just make small adjustments to the course and that makes life a lot easier. 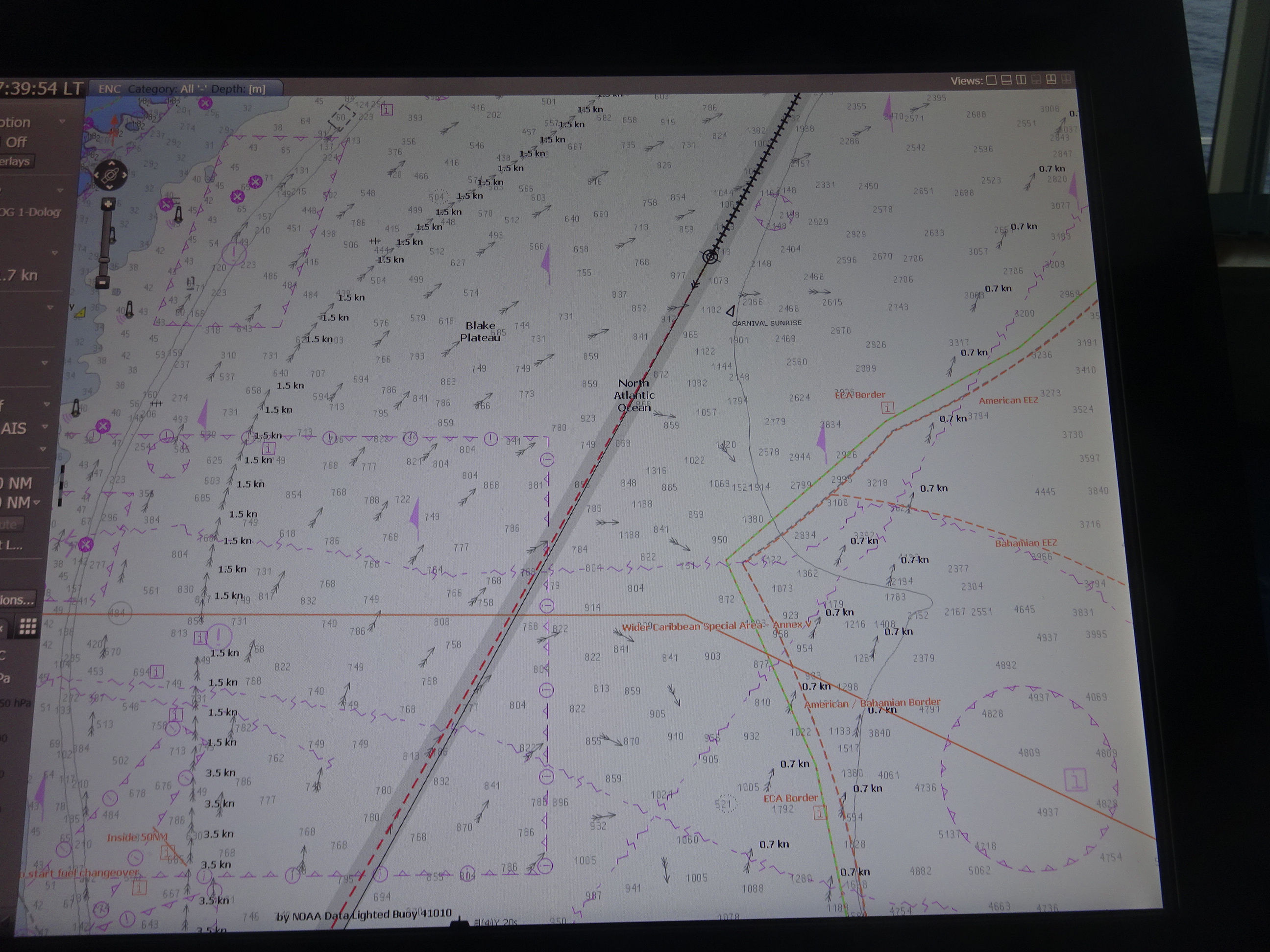 The electronic chart of this morning with the current track of the Gulf stream to the left.  Our ship is the round bulls eye cursor following the red dotted track line. Just below our ship you can see the AIS marker of the Carnival Sunshine going North.

This morning we passed the Carnival Sunshine and it was really funny to see at sunrise, while we could hardly see the ship itself, that the TV screen in front of the funnel was more clearly visible than the Navigation lights. Four miles away and the navigation lights were not visible at all in the dawn but the TV was as bright as a spot light. (The white top lights of a ship are in the dark required to be visible for a distance 6 nautical miles, if the visibility is normal) Maybe we have  to amend the Collision Regulations with the requirement that cruise ships over 100,000 tons have to have  a compulsory TV screen in front of the funnel; so we know what is coming our way. In merchant navy circles there is a constant discussion going on about updating the Collision Regulations and this might be something new to consider. 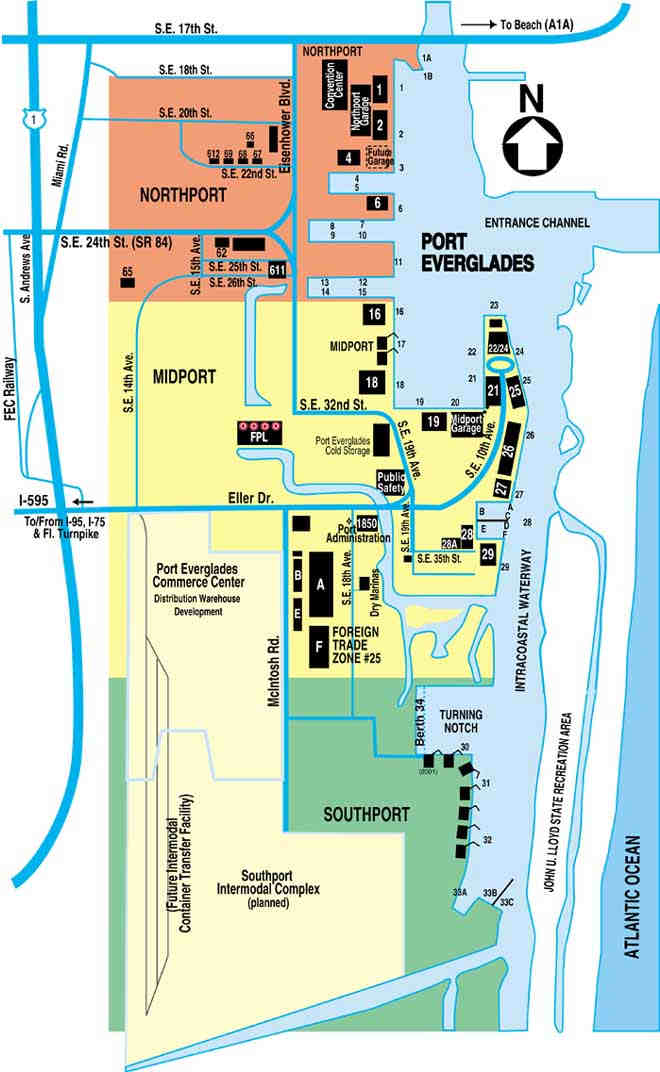 Port Everglades Docks Layout. Dock 19 in the lower part of the square basin

Tomorrow we will have a busy port day, with the Allure of the Seas, the Carnival Magic, the Adventure of the Seas and the Zuiderdam. Apart from Tankers, tug and tows and container ships we have three other Dutch ships in port the Stadiongracht, the Suomigracht and the Heemskerkgracht . The “Gracht” ships belong to a Dutch company called Spliethof and they normally show up  in Fort Lauderdale when the yachting season in Europe is over. These ships bring all the yachts home of owners who do not want to make the crossing themselves. But three ships in one day with yachts is a lot so it will be interesting to see what this all looks like tomorrow. We are scheduled to go in at 05.45 and are assigned dock 19. That is the middle dock in the basin. Our own terminal is number 26 but that has been given to the Carnival Magic this time as the terminal they were supposed to go to has two broken elevators. When we dock, the Allure of the Seas is already alongside and thus we will have 40 meters less to play with when going into the basin and swinging alongside.

Weather for Fort Lauderdale: Warm and muggy. 89oF /32oC overcast with a chance of rain showers / thunderstorms in the afternoon.

A bit of a change from chill New York.