We are always confused on the ships of where we are exactly going. The whole cruise world speaks about Fort Lauderdale where the cruise starts or ends but it is of course really Port Everglades. So I try to explain to everybody that Port Everglades, is what it is, the Port to the Everglades. It is part of Broward County which has a major who is also the boss of Port Everglades. (Please do not tell the Harbor Master) Fort Lauderdale is a separate entity and has its own mayor. For most of the officers on board who cannot get their head around it, the fact that there are two mayors normally makes the penny drop. For the rest it is a bit of a mix. Although the Sheriff of Broward County runs the security in the port we also see police cars from the Ft. Lauderdale police force cruising around but I have no idea if that is for work or on the way through. But no doubt they work together when somebody crosses the dotted line. I remember once, in the gray mists of time, one of our crew members became a little bit too happy in a pub. So happy that he thought that the waitress was in love with him. She was not so she called the police. Up showed Ft. Lauderdale police and then at the security checkpoint of the port he was switched from a police car to a sheriff car. In those days things were quite simple, the sheriff simply asked the captain to do something.  And the captain did something. He was booted off the ship in the next suitable port when he was sober again. So maybe he is telling his grandchildren now: Grand dad was once arrested by the police and then released by the sheriff and he only had to change cars to do this.

Port Everglades / Fort Lauderdale has always been a cruise port and it has had some sort of Ping-Pong fight with Miami through cruise history. In the 1960’s the port handled about 75,000 cruise passengers a year but some of them were regular ocean liner passengers who were on a liner voyage to a point of destination. Often South America or as far as Australia. Then when in 1968 cruising started with dedicated cruise ships and the port of Miami was selected by operators such as NCL and RCCI, Port Everglades lost out a bit on the main traffic. Holland America had its ss Nieuw Amsterdam calling there, mainly because the port costs were lower than in Miami (We are Dutch aren’t we), but Port Everglades lagged behind. And even then for a while we sailed out of Miami; only to return full time in 1984 when the new N ships arrived. And we have stayed ever since. Miami kept expanding aggressively with new Cruise Terminals but Port Everglades was not far behind and although Miami still has a much larger capacity, there are days that our port is completely full as well. There have been days that there have been 11 ships in and then every terminal except the oil terminals are full. That puts a real strain on the port itself with all the supporting traffic, on the sheriff’s department who has to keep the peace and the security and the airport which can see 20,000 guests leaving and 20,000 coming in the same day. Not counting the crews which have the home port as changeover day. 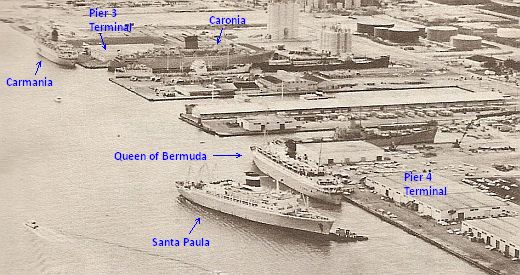 Port Everglades in the 1960s. No cruise terminals yet, just some warehouses at pier  1,4 and 15 and 16 (Photo courtesy www.getcruising.som)

I have been subjected a few times to these hectic turn over days and now try to avoid them as much as possible. Also the company is trying to avoid these bottleneck airports, Vancouver is another good example, and we see more and more crew joining during the cruise. This works better as well for turn over day as the crew that are not going home have less pressure as they do not have to cover the vacant spots. The 3 Dutch ships mentioned yesterday which were supposed to deliver yachts were delayed and are now expected this evening at the anchorage and stay there until a berth is available. 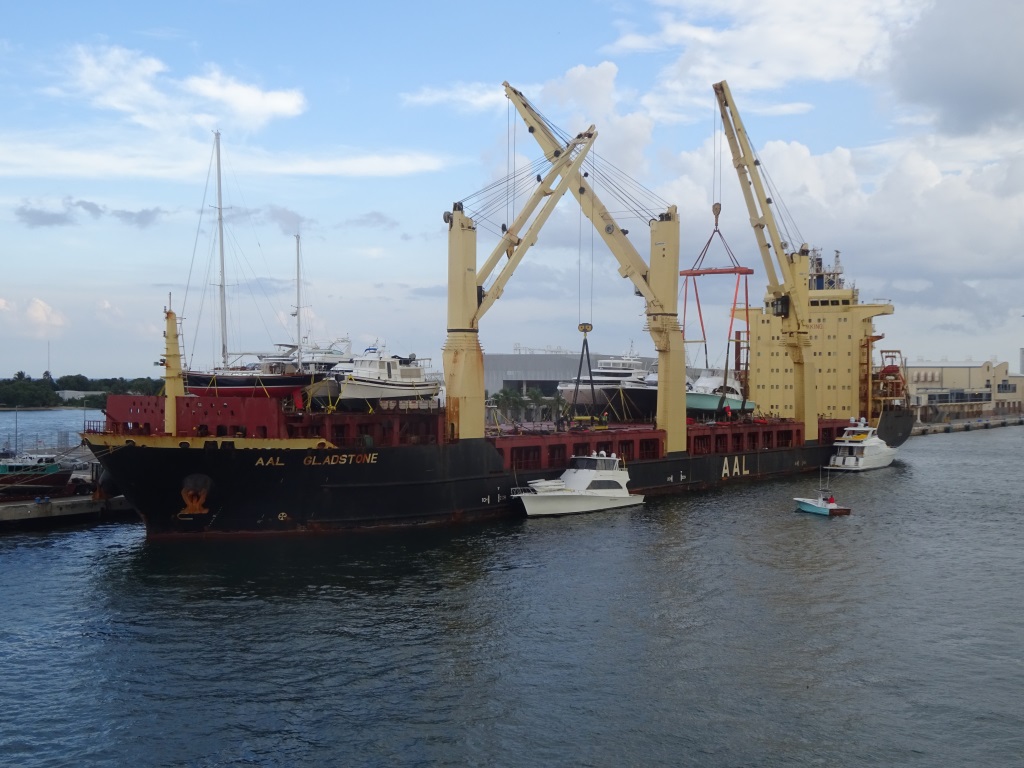 The AAL Gladstone. Please note  the loaded green boat is still hanging in their cradles. Once in position, supports are welded to the deck and then the boats are lowered to rest on the supports.

But in port was a bulk carrier which has taken a load of older craft on board. Looking at the mixture of boats and yachts, I think they were all older boats which were sold abroad. It included at least one work boat and you do not send a work boat for a summer sailing somewhere and the rest did not look very bright and shiny. According to the Harbor Master the ship will be there another day to store the ship properly so it looks that they are in for a long sea voyage. Also good securing is important as bulk carriers do not have stabilizers and can roll as a marble in a washing machine. 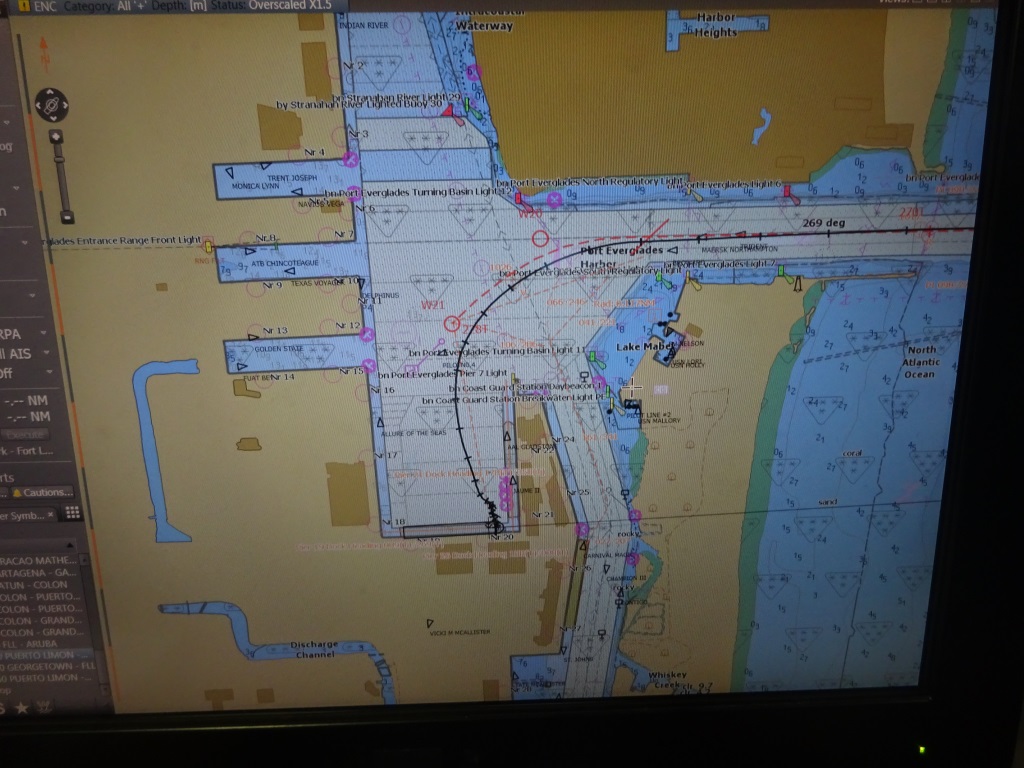 The arrival maneuver. No tugboats just own power, squeezing in between the Allure of the Seas and the Bulk carrier.

On arrival the Allure of the Seas and this ship (AAL Gladstone) were already there so it was a tight fit to get in. On departure the Allure left first and that gave a bit more room, but with so much more in the bow and in the stern, maneuvering on an inch is not a problem anymore.

Tomorrow we are in Half Moon Cay and we are the first, regular, ship of the season so the island is gearing up for the winter routine. We even have our corporate chef on board to see if all the facilities will comply with Holland America standards, once our cooks with the food start invading the island. For the guests who will do the invading as well, it is easy. We are the only ships so the large tenders with their bow ramps will solely be servicing the Zuiderdam. 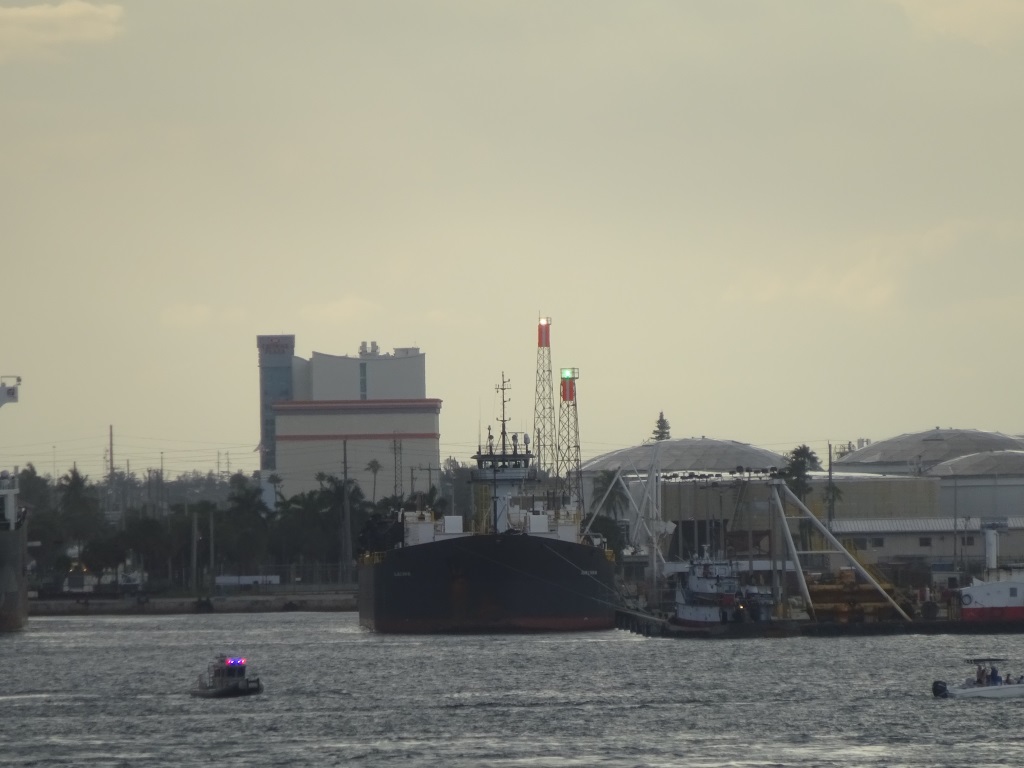 The last view of Port Everglades. The entrance/exit channel with the Leading lights. They are not exactly in line as the ship kept to the starboard side allowing small traffic to come in.

Cruises of the Past, Half Moon Cay, ms Zuiderdam