We were the first regular HAL ship that is calling at Half Moon Cay this year. This does not mean that no other ships have been here, or will be, but each company has its own routines and we apply our routines rigorously also to island practices. So today was the first time all HMC facilities were run through their paces in accordance with HAL standards. Tomorrow the Carnival Magic is visiting the island but they do their own thing. (And I have no idea what that is, apart from they use all the facilities as well). Ships from other brands of the Carnival Corporation can use the island as long as they do not send a ship while we are there. Thus tomorrow Carnival Cruise Lines can visit and apart from our island, they also use Princess Cays on occasion. Carnival does not have its own private island but the borrowing system works quite well as the cruise schedules are inter checked with all the brands to ensure that there are no bottle necks anywhere caused by ourselves. What the other companies such as RCI and NCL are doing is be doing is beyond our control so clogged up ports are still possible but the Corporation tries to avoid it.

We were by ourselves today and that meant that our tenders could stay at home as the islands tenders provided all the transport. This saves the ship a lot of hassle and it offers more convenience to the guests as the bigger tenders load faster but also can take more guests ashore than our small tenders. Since HMC started we have been improving all the facilities year by year and a few years ago this was also extended to the tender service.  When HAL calls at Half Moon Cay we can have two ships in as long as they are both HAL ships. We would even have room for 3 ships as the beach is more than wide and long enough to handle 6000 guests. But company policy is 2 and thus there are never more than 4000 guests ashore and maybe a handful of crew. 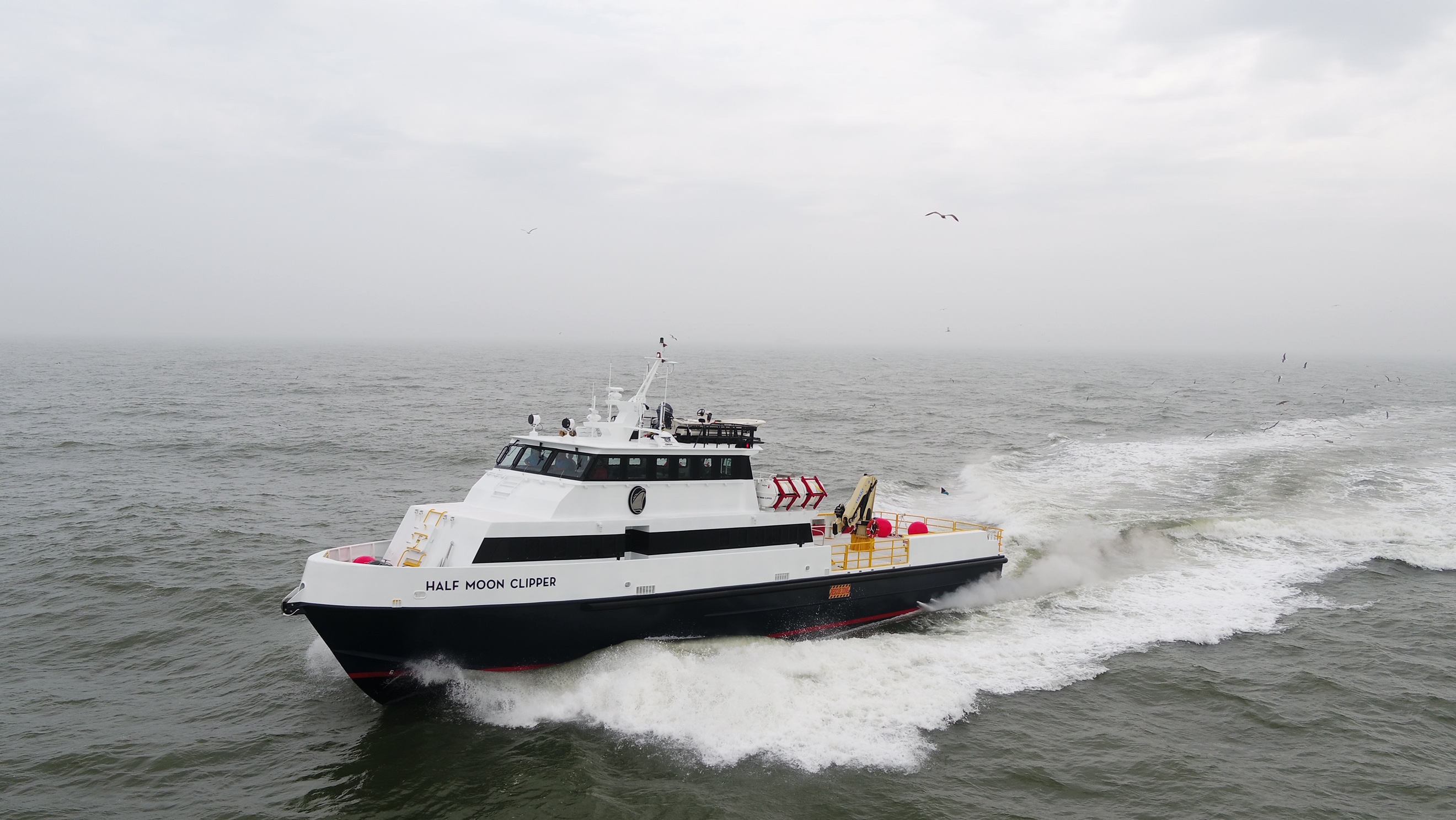 Half Moon Clipper underway –  The Clipper is our newest addition. She does not carry guests but transports  the Bahamian workers to and from HMC as they live on the island next door.  When the ships are in the Clipper transports the food and beverages ashore. The island provides the facilities, the rest comes from the ships. (Photo courtesy : Larry Bischoff, Manager Marine Operations HAL, taken during the  Sea Trials)

When there are two ships, then there is a pecking order. The biggest ship gets the two large shore tenders and the smaller ship has to run its own tenders but gets help from the smaller shore tender, which is a nice one as well but takes less peoples (267 versus 400). What happens in real life of course is if one ship has congestion problems and is supposed to run their own tender service than the captains will organize something among themselves, so that the overall ships service to the guests = which is service of the company to the guests = is not affected. I have seen it in the past, that the ships borrowed ships tenders from each other, if there were breakdowns or delayed arrivals, or that the large tenders came over for one run and (S- class with 1200 guests) nearly emptied the ship out with 2 loads as the big ones can handle 400 guests. (And it is amazing how fast 400 guests can get on the tender if they want to go ashore…….)

This one of the two big tenders. Each can take 400 guests and they go ashore via a bow ramp. This is the Anne Bonny named after a female pirate who once made the Bahamas unsafe.

When Half Moon Cay opened we only had the S class and the R class ships which called there on regular basis. Those ships then dropped anchor and kept the gangways in the lee with the aid of the stern thrusters. Now the ships are much more modern and have a gadget called D.P or dynamic positioning. Although the software is quite complicated, the principle is quite simple. The Azipods and thrusters are connected to a GPS system. The navigation officer sets up the location of where the ship has to stay, pushes the button and the computer compares where the ship is and where it should be and then gives orders to Azipods and thrusters. The navigation officer then just has to sit behind the console and keeps an eye on the proceedings to see if the ship stays within the margins set. As a result we hardly go at anchor anymore. The ship just floats at the safest, but shortest, distance from the port and stays there all day.

No tender, no anchoring, no maneuvering it was a good day for the deck officers but they were still busy. We have at the moment Lloyds Register on board and its inspectors audit the ship on behalf of the Dutch Flag State. This happens every year when the time arrives to issue a new PSSC or Passenger Ship Safety Certificate. Together with the Ships License it forms the passport of the ship so it can sail. We have another 1000 certificates or so which regulate the underlying rules and requirements but the PSSC is the most important one. So Lloyds Register does sample checks and tests for a number of days to ensure that what the ships company puts on paper during the year when they check and verify if everything on board is in compliance, is correct.  Today they did among other things, ventilation and AC stops, and those who remained on board had the eerie experience that certain parts of the ship fell deadly silent when the EM stops were pushed. A ship always has a lot of white noise, mainly caused by the AC, and if that suddenly stops then you a really notice it.

Tomorrow we are crossing the Caribbean Sea on our way to Oranjestad, Aruba. The weather in the Carib is expected to be good with regular trade winds and the chance of an occasional shower. 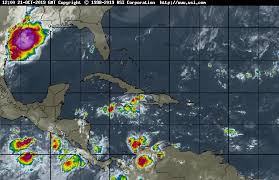 Weather chart of today.  Some rain and thunderstorm in a weather front but very little rain.