Normally we spend two days at sea to get to the Dutch ABC islands but you can do it in a shorter period, if you leave on time from Half Moon Cay and keep the pedal to the metal. This means for us about 19 knots and will result in an arrival time of around noon time tomorrow at the Oranjestad pilot station, and then we will be docked about 30 minutes later.  ABC islands, stand for Aruba, Bonaire and Curacao the three Dutch islands of the Venezuelan coast. (There is also a Klein (=s mall) Curacao and Klein Bonaire but those are two very small islands and are not in inhabited. The 3 islands form part of the Kingdom of the Netherlands but each has a different arrangement with the mother land. While Aruba is only nominally connected with the Netherlands, Curacao is somewhere in between and Bonaire is still very closely aligned. But they run most of their affairs independently and there is no completely free travel / option to live everywhere. If that would happen that there would be a fair chance that a lot of the islanders would come to Holland as there is more and higher paid work there and a lot of retired Dutch people would settle down permanently on the islands turning it into a big retirement village with no doubt a large hospital as well. So the economies are kept sort of separated and that is much better for the future of the islands.

Thus after departure the Zuiderdam raced southbound through the Bahamas, keeping Eleuthera Island on our starboard side. That is the island where the Bahamians live who operate most of the facilities on HMC. The arrangement is with the Bahamian Government is thus, that HAL will use as many local workers as possible on the island. They operate the shops, all the boats, look after the horse’s etc.etc. Where there is not enough skilled labor it is supplied by the ship. Eleuthera cannot supply 50 skilled cooks, 30 skilled bar tenders, medical staff and other ships ship’s specific functions. So they come from the ship and yesterday the first wave of crew consisted of 75 in total and that latter increased to about a 100 out of an 800 crew total. The Eleuthera based group is ferried to and from the island everyday with the Half Moon Clipper. During the night and on days were there is no ship in, there are only the island Manager (who has a bungalow with satellite communication) and the crew who look after the horses on the island. 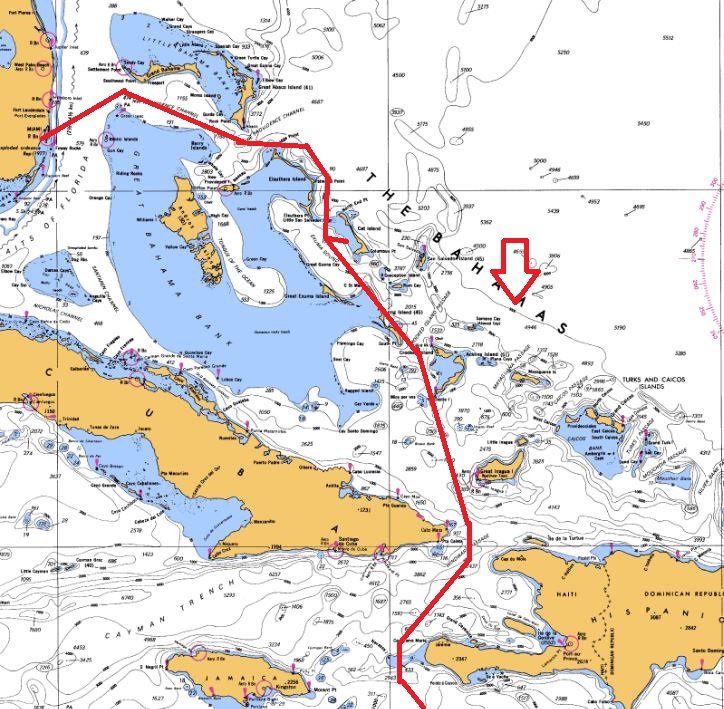 The route we have taken thus far. Around the North side of the  Bahama Banks and then down on the East side into the Windward Passage.

Once clear of the Bahamas we have then the Turks and Caicos Islands on our portside. These islands have a sort of similar relation to Great Britain as the ABC islands have with the Netherlands. The British Queen is the head of State and for the rest they have their own government.  During bad weather cruises, these islands provide a nice shelter against the North Atlantic swell, which means that the ship only starts rocking around 05.00 in the morning. Then it crosses the Old Bahama channel to enter the Windward Passage located between Cuba and Haiti.

Normally we are abeam of Cabo Maisi around 07.00 hrs. So when I go for breakfast I can directly see if the ship is on schedule or not. This morning we were right on the course line which takes us about 3.5. Miles off the Cuban beaches and those guests that were awake (not that many) could have a good look at the lighthouse and the elevation on which it stands.  Haiti is very visible as well but becomes more pronounced when we sail further south as the South West point comes very close to our course line (or the other way around I suppose as the island was there before us) Haiti lies on the island of Hispaniola and takes up about half of the island. The other half is made up by the Dominican Republic. Contrary to Puerto Rico which is one complete island, Hispaniola is split up in two as the two main groups on the island are ethnically quite diverse. Haiti is French leaning and the Dominican Republic Spanish leaning. If they would have been one island, then no doubt it would have dominated much of the Caribbean as it is much large than Puerto Rico and about 2/3 the total size of Cuba. Cuba is long and narrow and Hispaniola is almost square. 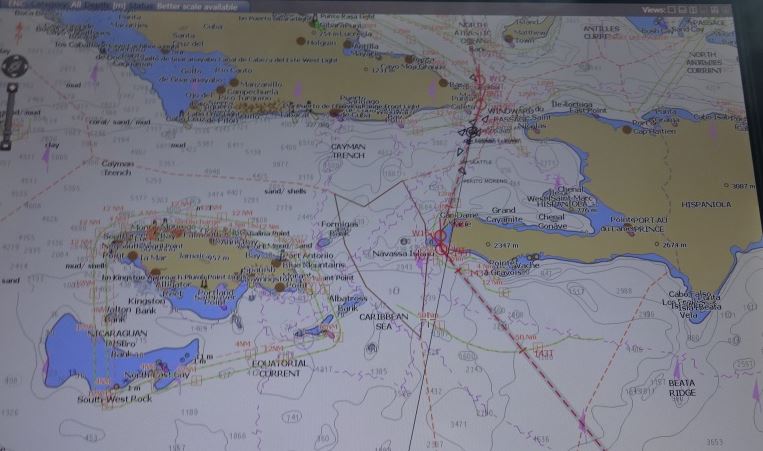 While we call at times at ports in the Dominican Republic (Amber Cove, Puerto Plata, Samana) we have not been back yet to Haiti. Holland America used to call there until 1982 and then local politics became too chaotic to stay.  I hope that one day we can return as it is a beautiful country and the population could use the money that the cruise ships bring in. Especially with the port congestion which is going on in the Caribbean a few more ports would be very nice.

But we are going to Aruba and today we have been crossing the Caribbean Sea which means the guests on the balconies on the port side had a windy day and those on the starboard side will get it after we leave the Panama Canal heading back to Fort Lauderdale.

Weather for Oranjestad Aruba: sunny with temperatures of 29oC / 84oF and the regular Trade Wind breeze of about 15 knots.