I always love it when the weather follows the weather forecast as we then do not look so stupid if things do not happen the way we announced it. But it took about an hour to sail clear of Madeira as it is quite a big and long island and then indeed the ship started to move again as predicted. Also as predicted during the course of this morning the seas abated, the wind changed direction and the movement of the ship got less pronounced. By lunch time there was only an occasional twist to remind us that we are still at sea. And even that got less in the course of the afternoon. Now we are looking forward to a number of nice and quiet sea days and our only concern is that in two or three days Cape Hatteras will churn out a new depression and if that happens and it goes a bit to the south then our last day we might see some choppy seas again. On the other hand, most of that day we will be in the lee of the Bahamian Islands so we should be all right.

When we talk about moving ships, and it has a keen interest from the guests and crew alike, it is because of our penchant to become sea sick.  What causes it, is well known, why not everybody gets sea sick is still a sort of mystery. Also not everybody gets sea sick all the time and every time. It seems that for each person it is slightly different. I only was seasick once in my life and that was when I was asked to come to sea for a weekend to help sail out a new fishing boat. Not a small one but one well over a 100 meters (300+ feet) which had a complete fish processing plant on board. I was all for it as at that time these fishing boats had much more modern navigation equipment on board than the old ships of Holland America. So I went on the trial trip of this fishing boat and the weather turned really bad on the North Sea. Because this sea is so shallow, the waves, whipped up by the wind, are really short in rolling length but steep. Causing ships to really dance on the waves. That did not bother me much and I was happily sailing the boat up and down the intended track while everybody else focused on checking if everything worked. By now the boat was slamming considerably into the waves at times the bow was lifted completely out of the water. But things went well until they started up the fish processing plant which included frying fish-sticks. When this oily smell came drifting into the wheelhouse, it got but too much for me and my lunch was donated to the fishes. Same goes for my wife she is also a very good sailor, she only got sea sick when she was on a sailing boat and it went on the slant. The angle with the horizon did the trick for her. Not the boats movement. 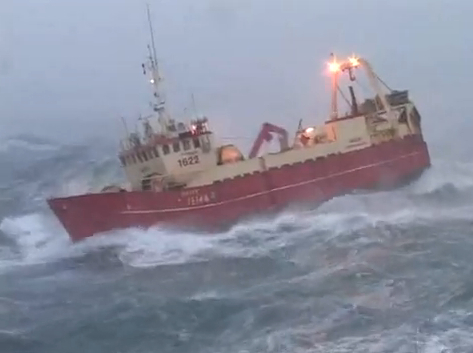 I plucked this photo from the internet. Although the fishing boat I was on, was much bigger, she behaved in the same way.  (Photo courtesy, thank you to the unknown Photographer)

Why I am I writing this, because I was wondering if animals get sea sick as well. They do and nowadays there is medication for that. And they get seasick in the same way as humans do. Some don’t and some do all the time. We have on a regular basis animals on board. Sometimes as Blind Guide Dogs, sometimes as Service Dogs (the ones who open washing machine doors etc.) and sometimes dogs who will alert the owner if there is a seizure coming.  The ship is prepared for these dogs as we have doggy-lifejackets on board and we have a patch of grass for their daily visit. 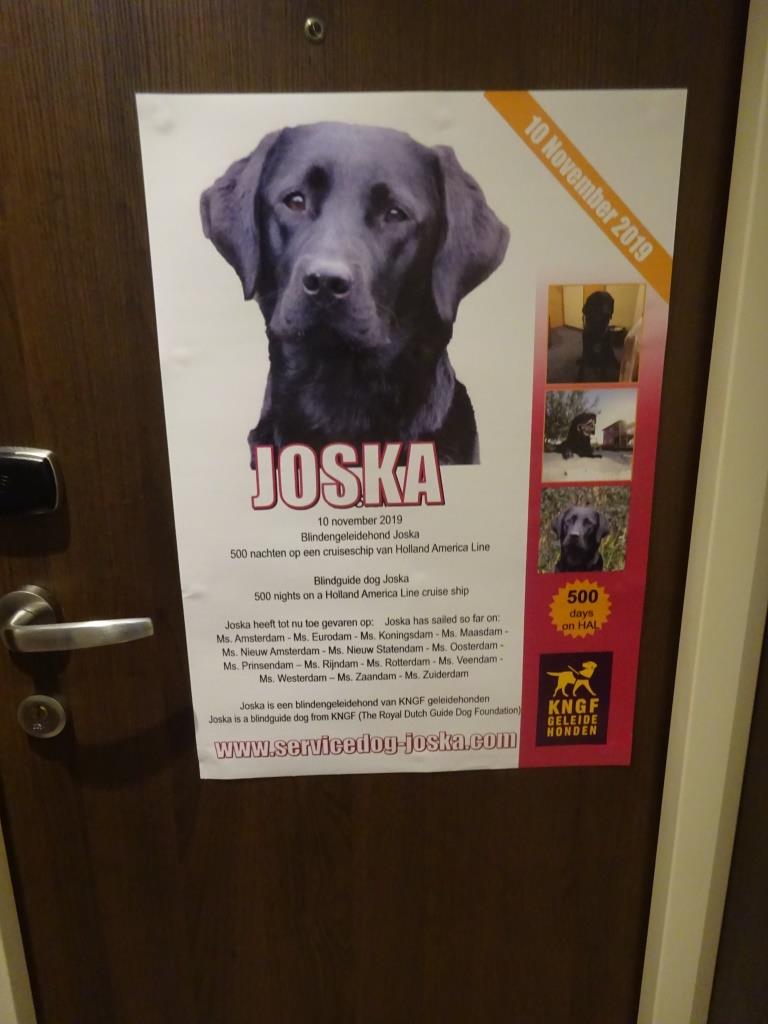 The Guide dog currently on board. I do not have details about Joska as she has her own website.

We have a Guide Dog on board this cruise and quite a famous one, as she has 500+ days with Holland America. And thus also has a 500 day Mariner Medal to prove it. We are now all waiting to see if she will make the 600 days before she will retire, as there is mandatory retirement after seven years. 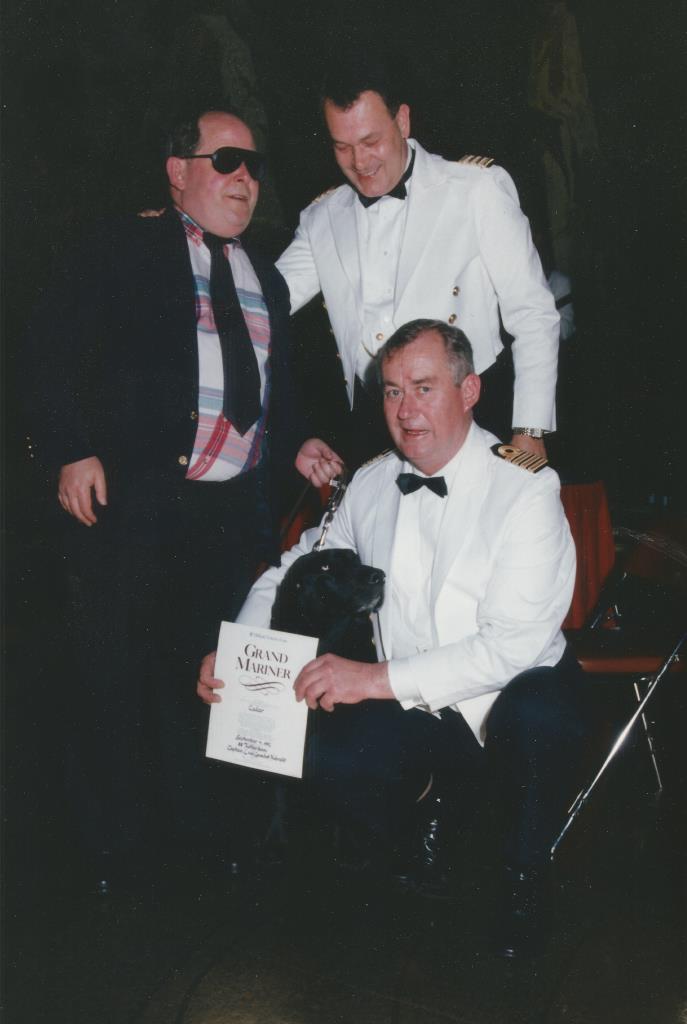 The first time a dog was inducted in the Mariners Society. Captain Leo van Lanschot Hubrecht with the Grand Mariner Certificate. (Below Grand Mariner was Cadet Mariner and Able Mariner)  The  officer in the back is the late Hotelmanager J.J Scheringa.

Dogs being part of the Holland America Line Mariners Society is something that came about as the brainwave of one our captains. Captain Leo van Lanschot Hubrecht (long time retired but still very active) applied the logic, that if a guide dog has a lifejacket and goes with its owner into the lifeboat than it qualifies as a passenger and thus qualifies as a Mariner. And hence the first Mariner certificate was issued in 1992 to a dog. (Before we went medals only, we had certificates and medals and we counted miles, not days). When I became captain, I did the same and most of my colleagues followed and I am glad to see that we are still doing it.

Tomorrow is our 2nd day at sea and it should be smooth riding although a bit windy on the bow. 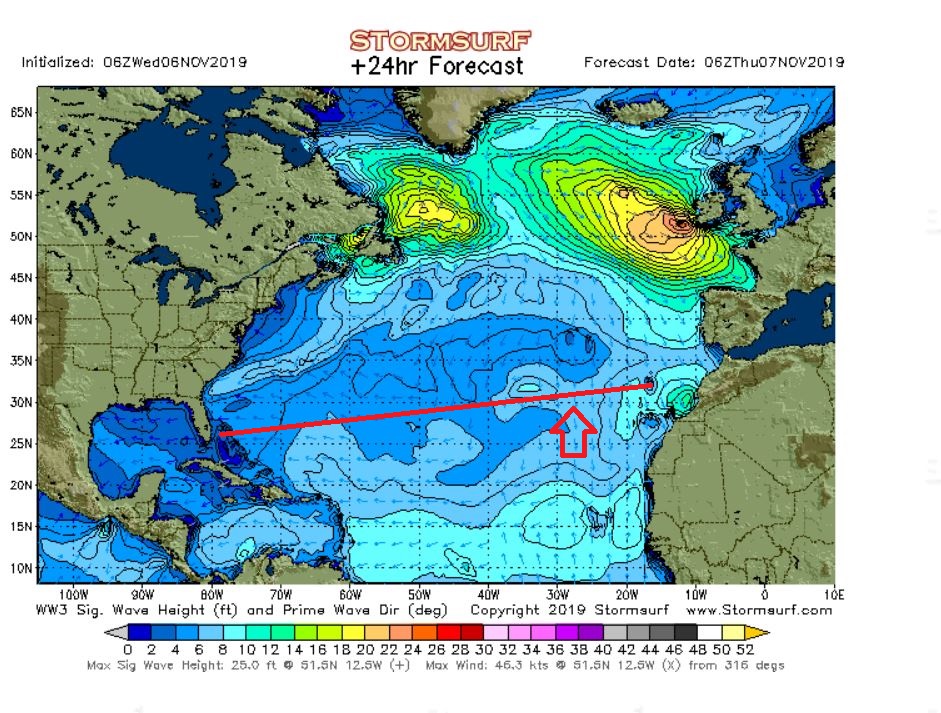