And we wobbled happily during the night towards Funchal where we arrived almost on time but as we were last in the pecking order for docking we had to slow down and let the AidaStella and Mariella Explorer 2 go first. They had been exposed to the same weather and must have wobbled more than we did as they were still in the docking process during our official arrival time. As a matter of fact the Koningsdam was already going stern in while the Mariella Explorer 2 was still doing the same thing behind us. It all cost us an hour but, this is the luck of so much time on an ocean crossing, the captain decided to stay an hour longer so the port time remained the same. The weather for the crossing is expected to be good after tomorrow and thus it will be easy enough to make up 1 hour over a period of 6 days and nights.

We could see the new dock opposite us and that is where we would have been if it had been possible with the ocean swell. Even where we were today, sheltered behind the breakwater, the ship had a slight movement, caused by the waves bouncing back from the other shore side. This new dock itself is great as it allows the guests to walk straight into down town but there will be a number of days a year that the swell is coming from the wrong direction and the ship would not laying still e.g. safely alongside. As it is always a matter of what was first, the chicken or the egg, they decided here to first build the pier, then ascertained that the swell could be a major problem and then made the decision to extend the breakwater so the new pier is sheltered from both South West swell and South East swell When, we do not know. They built two new docks in the last 10 years (the AidaStella was at the other one) and based on that thinking we should have a longer breakwater in about 5 years. That would then also give space to another cruise ship or more space for cargo ships on the breakwater side. 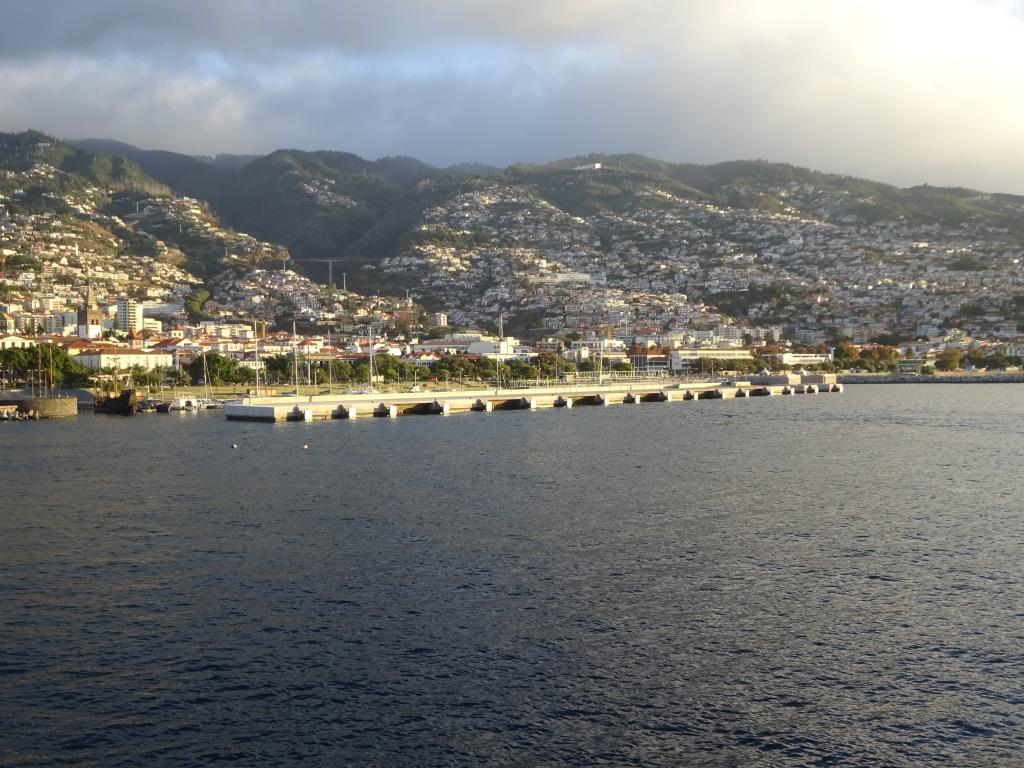 The new dock, so close and yet so far. But swell is swell and a moving gangway is not safe. In the background a part of Funchal. Most of the houses are built in a curve against the south side of the hill, to be sheltered against the prevailing North Atlantic winds. 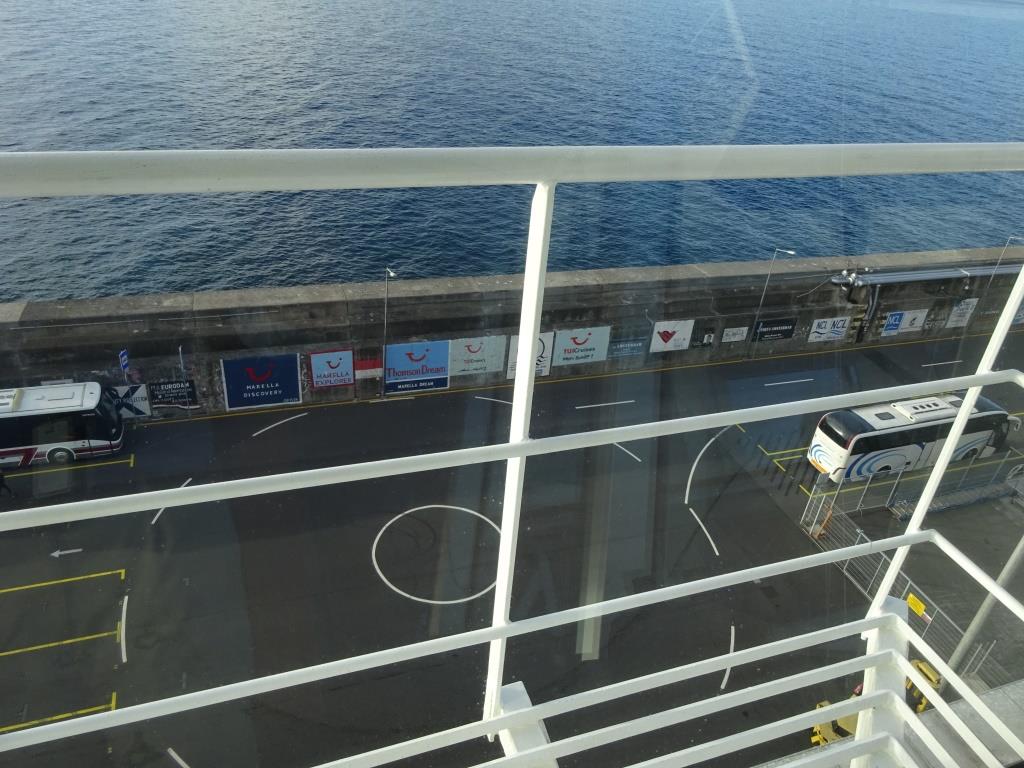 The inside of the breakwater wall is covered with ships logos. All ships basically get a chance as an exiting mural disappears after about 8 years due to aggressive salt air. It is a very long breakwater wall so all the ships who call here get a chance. Not only cruise ships but also cargo ships and or navy ships.

One of the ways of doing that, is to throw little spanners in the wheel. Not in a way that it derails the exercise but in a way that crew come across something they were not expecting and now have to morph their theory into practical action. For that I like to use the Cadets on board, as I know I will get an intelligent debriefing after the drill. Once of the things that I do is called “little Johnny”. A cadet goes roving through the ship playing a child who is looking for his/her mummy.  All crew is trained what should be done but now suddenly there is a “child” in front of them who throws a tantrum. They now have to investigate where the child has to go to, they have to get escorts to help and communication has to be so good that Muster Control, which is the  controlling entity during a drill, can follow the evolution step for step as they are the ones who get the distressed parents on the phone who have lost little Johnny.  We know that children by themselves do not panic, they see everything as an adventure. Children only panic when they get the wrong vibes from the adults. So finding children in an emergency is not as easy as it sounds as they might be running around everywhere or even hide in the ice cream parlor. The job of all crew is to get them back to their parents as quickly as possible. For a big ship that might take some time and thus it is also important that Muster Control can keep the parents / guardians appraised of the process and where little Johnny is during that retrieval process.  This time it took 7 minutes between me losing Little Johnny (should say little Joan as it was our female cadet) and the search time it took to find her. Two more minutes and the family was re-united at the Muster Station. That is not a bad time for a ship the size of the Koningsdam with so many hiding places, so I was quite happy. 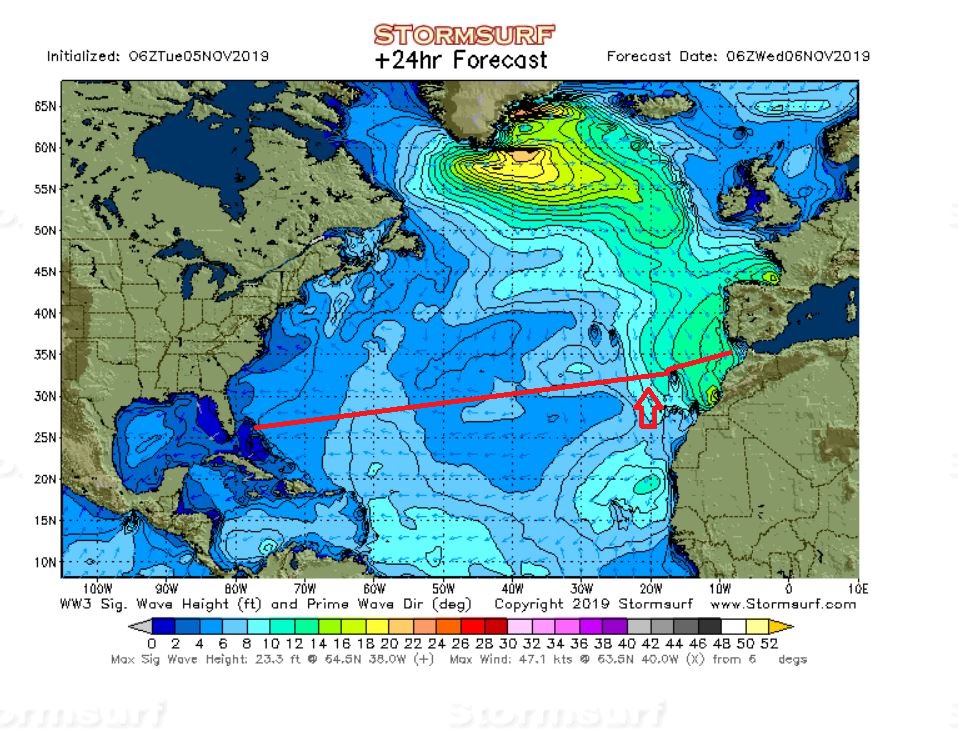 Our rough sea diagram. The weather front has landed in the Gulf of Biscay and the only thing that remains is the wave field. The arrow indicates about 18 hrs. after departure Funchal and then the Koningsdam should be out of that wave field.

Tomorrow is our first sea day of the North Atlantic crossing and we have 3115 NM. to go. Once we clear the island of Madeira we will be under the influence of the weather again that we had yesterday and thus we will move about again. We are sailing away from that weather and thus by tomorrow lunch time we should start getting out of its influence. From then on it looks like a very smooth crossing. The captain has chosen the Rhumb Line route, which takes us further south than the shortest route (Great Circle line) and will keep us away as far as possible from wave fields located further to the north. Things are not looking bad at all.