We are experiencing now nice autumn North Atlantic weather with sunshine and clouds and a considerable breeze outside. But for the wind we have glass wind breakers all over the ship and thus nobody is affected by it. As can be seen from the wave & swell map, the ocean is blue and that means the ocean is flat. Or better said as flat as can be, because the North Atlantic swell is always there, as swell is defined by waves caused by something that has already passed by. The wind that is blowing will make some waves but nothing that really affects the ship. Occasionally we feel a little jitter when a waves comes by that is too fast for the ships stabilizers to catch. Stabilizers can dampen out about 90% of the motion otherwise felt, so sometimes we notice the 10% that does not get caught. 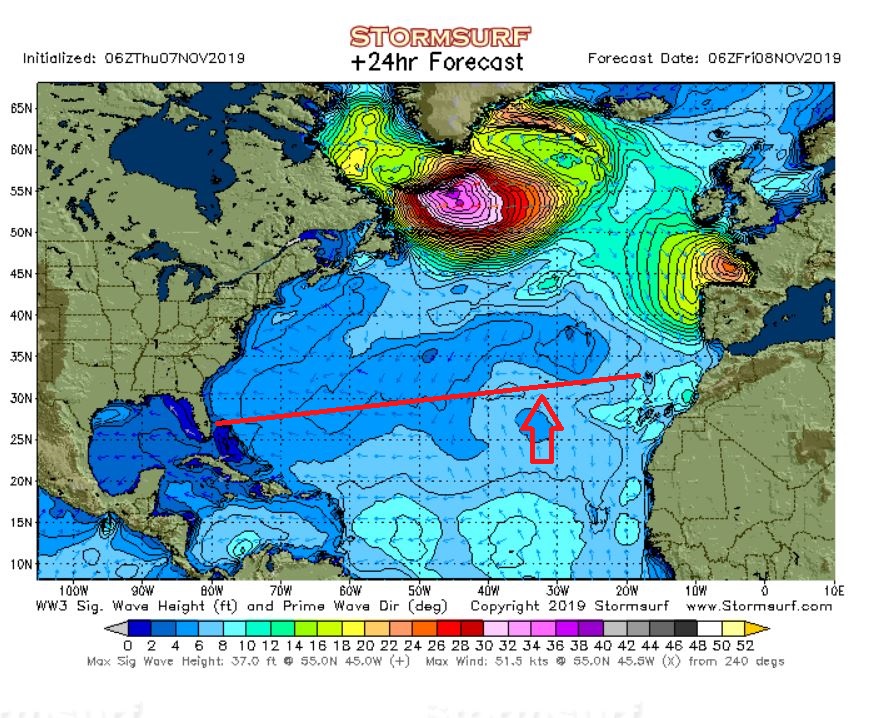 Nice blue colors make for smooth seas. Things are very nasty near Nova Scotia, reason why all the cruise ships leave from there by Mid October. Things are also not very good in the Gulf of Biscay.  The Northern edge of that weather front is bringing torrential rains to parts of England , so we are definitely in a better place.

Although the wave map gives such nice blue seas, the captain has opted for the Rhumb Line course to Fort Lauderdale. That is a straight line in our charts. But our charts are a projection of the world’s globe. In a way cartographers peeled the top layer of the globe of the world and pushed it flat so it became a chart. And then we draw a straight line on it. If you then would put that layer back and draw the same line again from A to B then you would find out that the line you drew with the peeled layer flattened is now longer than the line drawn when the layer went back on the globe. You can do this at home. If you would manage to peel the skin of an orange and then flatten it on the table (with as few cuts in top and bottom as possible) and then draw your next straight line and then put it back on the orange. That line should now be longer than the first one drawn when the orange was still whole. (No worries if it does not work, you can always eat the orange) 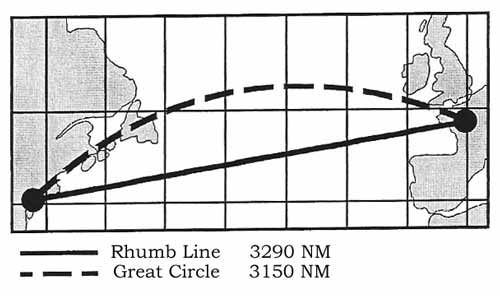 The Rhumb Line is thus longer than the curved line (Great Circle) line and it goes further to the south and thus stays for our crossing in calmer waters. We are always concerned that Cape Hatteras will come up with a last minute surprise and will push a wave field down towards us during the last days. Thus being a bit more to the south will help.

My activities took me to the Engine Room today to perform a health and safety walk through on behalf of the Chief Engineer. I am not technical so I see things in a totally different way and apply a nautical logic instead of technical thinking and that gives a fresh pair of eyes. The engine room of the Koningsdam is in an excellent condition but we have about 5000+ rules to apply, rules that come out of our Safety Management System and some of them are quite obscure to put it mildly. You cannot expect from an engineering team, or a nautical team, or a hotel team who are in the heat of the battle to do something that they remember at all times paragraph b 7 in regulation ABC39. We train for all these things but we are human. Because I travel over the whole fleet, I can run a film in my head comparing all the ships. I do not know all the rules by heart either but by comparing ship by ship I can see discrepancies. Then the question mark goes up, we check our all-knowing Safety Management System and sometimes I can then help out to improve the routine in place; so that this routine now covers something that was otherwise forgotten. The days that the Chief Engineer was able to see everything are also long time gone as with our Maritime Culture of checklists and compliance procedures he (we do not have a she yet, but here might be one in due course) spends more time behind the computer as a technical manager than as an engineer running around in his beloved engine room. 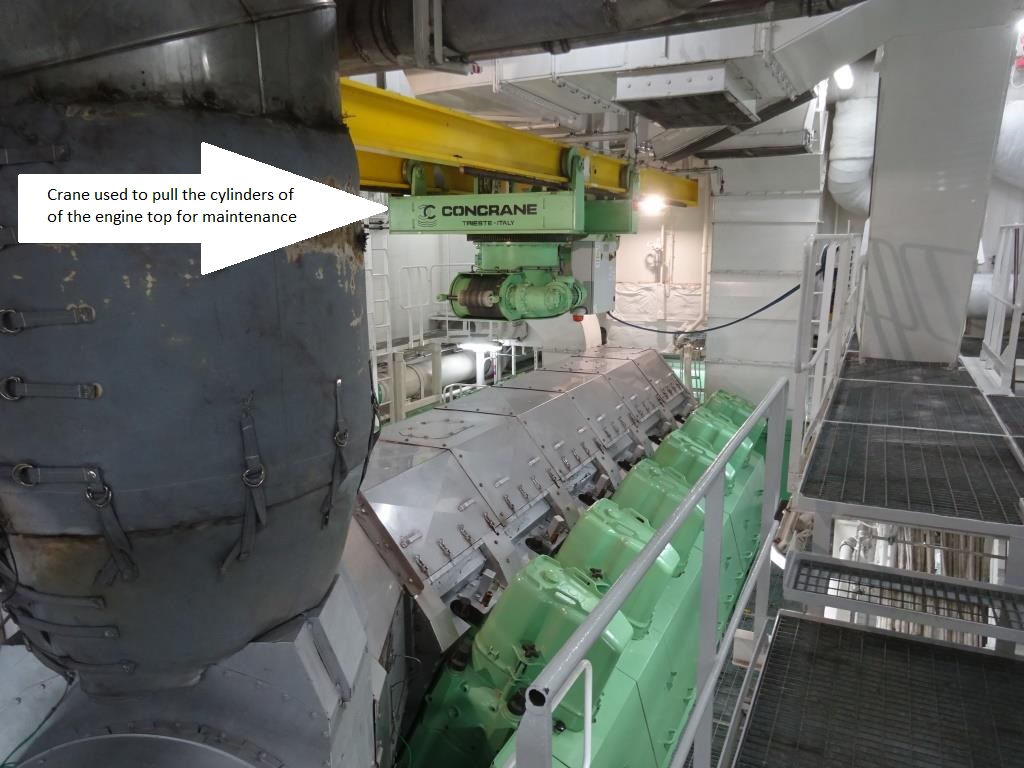 The main engines are four V-type 12-cylinders diesel/electric MAK 12 VM43C, each with power of 17,200 hp at 514 rpm. The total output power of the engines is 68,660hp, which is transferred to the two ABB Azipods with 14,000 kW each. This is the engine on the starboard side in the aft main engine room. With four engines there are two engine rooms which can run completely independently from each other. If one would be completely out of order, the other Engine Room would be able to provide everything as if nothing had happened.

With the ships getting bigger, it takes me more time to go everywhere. With an engine room as small as on the Prinsendam I could make a full round, and look at everything closely in about 3 hours. Including a detour into the funnel uptake. Now it took me 2.5 hrs. just to walk the lowest deck of the engine room D Deck with only visiting the main and larger spaces. Higher decks, workshops, store rooms etc. will take many hours more.

I have the highest respect for engineers who work in sometimes very warm (not too hot) and noisy area’s and do things with machinery that I do not understand at all. Plus they are able to do this without feeling the need to have to have a look outside. A need that I as a navigator have all the time.  Nowadays it is a little bit easier as we have big flat screens connected to outside camera’s everywhere, but still.;I it is and will remain a totally different world from bridge.

Yesterday I gave a lecture for the guests of about luxury and speed on the North Atlantic. The so called Blue Riband challenge. All based on ships going faster and faster requiring bigger engine rooms and more skilled engineers. But after a successful run the Chief Engineer who made it possible was seldom called forward.   Below I have included a little poem which I believe was written in the 1930’s. Morale: the Captain sails the ship but he does not get very far, if he does not get the speed from the Chief Engineer. (And if he wants to eat he needs the Hotel Director as well………)

Tomorrow there is another sea day with good weather and very little to worry about.

Below a bit of culture by means of a Maritime Poem. 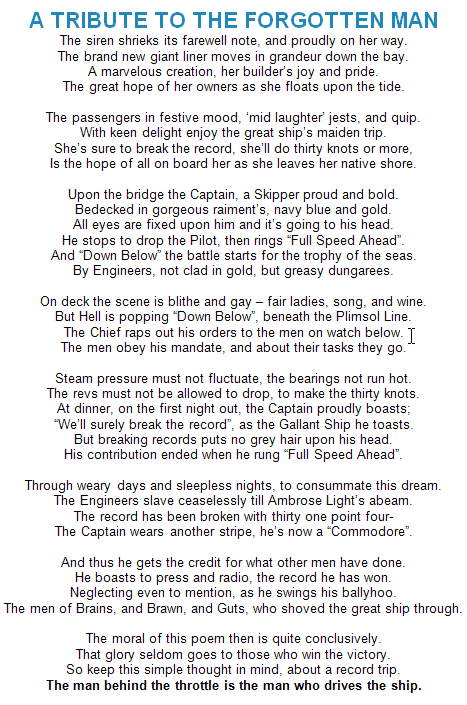