Today we sailed on a slightly NNW course towards the Windward Passage the gap between Cuba and Haiti on Hispaniola. This means that during this course we sailed south along the East side of Hispaniola and then north on the West side. A sort of circumnavigation of the island with a very wide turn. The area under Hispaniola now looks again as it used to, very windy, but not too much swell as the angle of the Trade Wind is half over the island and that reduces the free wind surface needed  to whip up the waves in height.

This was a thing I used to my advantage during my first year as Captain on the old Noordam. Learning how to use this to my advantage. No open water around, no swell or waves rolling in. Being used to not being able to operate a tender service in ports when the winds were stronger than force 5 or 6 because of the generated swell causing too much chop at the tender platform. Then I came to Greece. Here the Etesian winds from the North can easily blow 35 to 45 knots at times and I found out if I anchored close enough to the shore then the wind might be ferocious but there was not enough distance for the waves to build up. At the same time that strong wind would keep the ship away from drifting onto the shore. 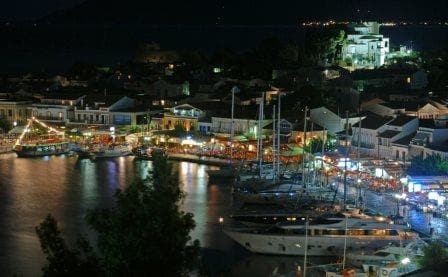 The harbour of Pythagorion by night. We parked our tenders right in the middle of the town.

The best example was Pythagorion on the island of Samos. When I arrived it was blowing a severe gale but coming closer to the breakwater of the port the flatter the water went. In the end I dropped two anchors about half a ships length from the breakwater and ran a perfect tender service for the day. The tenders docked straight onto the little boulevard with rows and rows of Taverna’s right across the street. Tendering during a full gale and the guests really did not notice it. We stayed until 11 pm. and while normally Guests all return for dinner on board, that evening we had a really hard time of getting them out of those taverna’s and back on board. The little town was in the shade of the mountains and there was hardly any wind blowing through the town so everybody could sit comfortably ashore. Sitting in Greece under starry night with a good glass of wine looking at a fairy tale lighted ship was Paradise revisited and nobody wanted to return. If I remember rightly we had 3 tenders lined up at 22.30 in the evening to get everybody back on board at the same time.

Through all the years this was for some reason a call which I have never forgotten.  We only called there a few times and later not at all anymore. I wonder if it has changed much. Most cruise ships call at Kusidasi just around the corner which attracts more people due to the tours to Ephesus.

Greece is far away from the Caribe, although I will be there again in the very near future. The training class for new officers is coming to an end here on board the Noordam. For three weeks they have been listening to the HAL gospel as preached by me. They have been suffering under a assignment dreamed up by nasty me and been exposed to training drills they had never dreamt about by an even nastier me.  Tomorrow is the final day with presentations; handing out certificates and finishing off with a farewell dinner. Then some of them will fly home, waiting for their first assignment. Two of them already have their assignment, here on the Noordam and can simply stay on.

I will fly home for a few days, and on the 5th. of April join the Prinsendam for 3 weeks in the Mediterranean which will include several Greek ports.  As the Prinsendam normally does some unusual ports there will no doubt some items of interest to highlight. My blog will be silent until the 6th. when the Prinsendam leaves Barcelona for travelling into the Med. All the way up to Istanbul.

Tomorrow will be our last day at sea, travelling to the old Bahama channel towards Fort Lauderdale. The guests on board have had a really warm and sunny cruise, so they should be very happy.

Weather forecast: there is a frontal system descending onto Cuba from the American East coast and that will cause cloudiness and a considerable drop in temperature.  Time to put the sun tan lotion away.

I will be back in a week.