Guests do not always understand why we sail early from one port while the next one is just around the corner; and why we stay longer in another port while the next port is also nearby. Well it has to do with the design of a cruise. The company tries to create a multi experience event which the guests will appreciate and then come back for more. And thus we try to fit in on a longer cruise one evening in port for an on deck experience and the option to enjoy night life ashore. Willemstad on Curacao and Oranjestad on Aruba are such ports for the South West Caribbean and San Juan Puerto Rico is such a port for the East Caribbean. This port is most of the time followed by a call at St. Thomas which is just around the corner again.

Whatever time we leave the distance to the next port can be very short and then the ship just goes very slow to adjust for a scheduled arrival. Except this morning. We left at 11 pm. and shortly after the Captain was informed that a guest needed some special medication which was not on board. Then you can return but with Aruba just next door, you might as well speed up for a few hours and dock as soon as possible in your next port. It would take the same amount of time to return, then to continue, with the islands being so close together. Thus the Noordam docked this morning very early, while all the guests where still sleeping. The patient was taken care off in the proper way and the other guests were not inconvenienced by arriving late in the next port due to a medivac.

Our ships hospital is laid out as a regular small Emergency hospital and first aid unit as ashore. We have two doctors and two nurses on board and they can take care of all the incoming issues as would be the case at a regular A&E. On shore the patient who has a more complicated issue is then directly forwarded to a larger hospital where more specialized doctors are available. We cannot do that as easily on the ship and thus we have to carry out medical disembarks or Medi-vacs.   The medical team stabilizes the patient if the situation is serious and then the captain tries to find the nearest and most safe place to get the patient on the way to an appropriate hospital. Sometimes this is by helicopter, sometimes by boat and sometimes the ship sails into another port and simply docks there. Ambulance shows up, arranged by the local port agent, a ships side door opens and the patient is disembarked.

I took a few hours off yesterday as my trainees where busy with preparing a case study to present on their final day, this coming Sunday. They have been given a ships accident to investigate by producing a time line of the significant moments in the case and then point out where it went wrong, where it went right and if are there any lessons learned. Before that they had security training from our ships security officer and observed the gangway operation with the security guards. 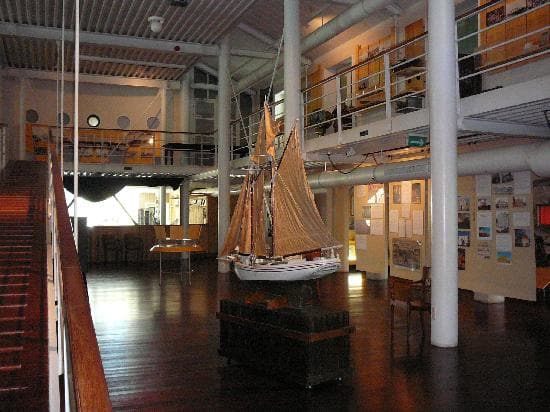 The museum has three levels. One and two depict the development of Curacao and the sea trade and on the 3rd floor is a Royal Dutch Navy exhibition depicting that part of the islands history.

That gave me time to show around the people from the Maritime Museum in Willemstad. It is right opposite the fruit market I wrote about yesterday and very much worth while a visit.  I have asked the Curator if he could find out the answers to some questions which I have in relation to office presence of Holland America in Willemstad in the 2nd world war and if there were any photos from the olden days showing HAL ships docked in port.  So we will see what comes up.

Today we are staying until 5 pm. as we need the time to get back to Fort Lauderdale on time by Monday. This stretch is a 19 knot run and that does not leave much room in the schedule in case there is adverse wind, swell or other issues which might impede the timely arrival. Saving a few minutes here and there soon mounts up and if you can get out at 16.45 instead of 17.00 hrs. then that is a nice bonus.

During the night and tomorrow we will cross the Caribbean Sea, heading for the East Side of Cuba and then sail through the Windward Passage to arrive north of Cuba.

Weather:  Sunny, but very windy and that means a wobbly sea until we get in the lee of Haiti late tomorrow.