Today we were the only cruise ship in port and thus we docked at the mega pier on the outside of the harbor of Willemstad. 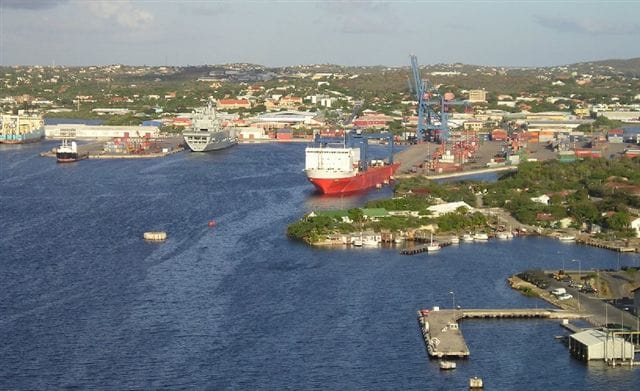 As previously explained Willemstad really consists out of two halves. Otrabanda to the West and Punta to the East of the fairway leading into the harbor in the middle. That middle part consists out of the Schottegat and leads to the St. Anna Baai a large and natural deep port inside Curacao around which a large port complex has been built. The nice thing is, it is really sheltered but the bad thing is it is a fairly small gap to sail into with a lot of cross current to deal with.  In this natural safe haven you can find a dry dock, tanker docks or the oil terminal, a container terminal and part of the Royal Navy base.

Because of the small gap and the cross current which can go up as high as 3 knots, cruise ship captains are on average very happy to dock at the Mega Pier, and there is the 3rd reason; the Trade Wind which blows from the same direction as the current flows. For cargo ships it is less of an issue but floating apartment buildings do catch a lot of wind.  Wind and current together give a nice drift and if you then have the possibility to avoid all these issues by going to the Mega pier then you go.

The mega Pier has the same wind and the same current issue, but when you dock here you get it on the nose and with the nose in the wind or in the current you do not drift. One kick ahead on the engines and the ship stays nicely in position while you go slowly alongside. Today was a very windy day with a very gusty Trade wind performance so it was a good day to be at the Mega Pier. 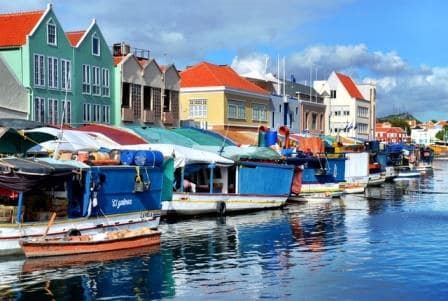 The floating market from the water side.

A special feature of interest is the floating market in Willemstad. Just inside the entrance there is a small side canal on the (East) Punta side. There fruit and vegetables are being sold directly from the small (that brought them in) boats to the public. These boats come across from the north coast of Venezuela which is as the crow flies not more than about 8 miles away. Curacao has a much more arid climate then Venezuela, hence the import of all things green and juicy. (And colorful) 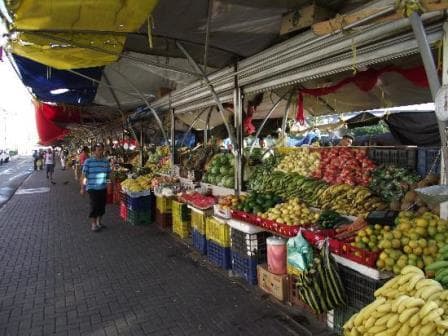 The floating market from the shore side.

It is very nice to see these little boats suddenly appearing out of nowhere in front of the entrance of Willemstad harbor, slip inside and have a roaring trade going 5 minutes later. Close near 5 pm. they all leave again to go home, just to repeat the whole performance again the next morning. I once asked if bad weather stopped them from coming and the boat/shop lady, after some thinking, replied that only real heavy hurricane could do that. A bit of storm did not keep the grocer away it just resulted in higher prices as not every skipper liked to get out in wobbly weather. Apart from fruit and vegetables there are also stalls (read boats) with fresh fish. Once I saw a boat unloading Venezuelan beer but that was a long time ago. I wonder how it goes with Customs import duties.

We have a long call here, as we stay until 11 pm. Main reason for this is the option to hold an outdoor barbecue and deck party. When sailing that is not so easy. The captain can create a relative wind still situation on deck by sailing with the wind and matching the wind speed but then you might go the wrong way for too long which hampers the schedule  and the Barbecue smoke will stay on the ship. Or you can have wind on deck and then everybody’s plate might fly away. So we do it in port with the option for guests as well to enjoy night life in Willemstad. If they do not go then the crew certainly will.

I will be on board to catch up work from this afternoon as I had the Curacao Maritime Museum people on board for a visit. More about that tomorrow.

Tomorrow we are in Aruba which is the next island to the west. To get there is only a hop and a skip and that is why we can leave so late.

Weather for tomorrow: Same as today; Sunny, Warm and Windy.