In the early morning we rounded Bonaire from the West and then sailed south under the island heading for the town of Kralendijk. Looking towards the south, towards Venezuela it looked as if we were in for a rainy day. Dark clouds were laying overland and some extended to the ship.  But then the sun gathered in strength and it all disappeared and it became a hot Caribbean Day.  There was not that much wind blowing over the island and the Noordam easily docked at the North Pier.

Kralendijk has two docks, the old one on the North Dock right opposite down town and the South Dock which was constructed later and is further out of town. When there are two ships in, the biggest normally docks at the North Dock so the largest number of guests have to walk the shortest distance.

However today we were the only ship and thus we docked at the North Dock. 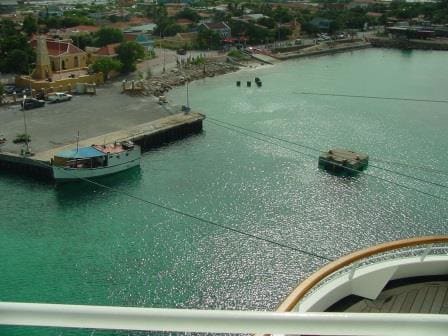 Top left, the mooring lines at the bow disappear under water.

Docking here is rather peculiar as the dock is fairly short and thus only the spring lines are connected to the dock, the rest, the breast lines and the head lines, go out on a 90 degree to bollards on the shore side. Some of those bollards are nearly submerged on high tide and then it looks strange to see mooring ropes disappearing under water.  But the wind tends to breeze up during the day and then these breast lines (those lines perpendicular to the ship) are needed to keep the ship alongside. The regular Trade wind blows with 16 to 20 knots but on occasion it is not unusual for it to go up to 35 to 40 knots while it is not really bad weather.

Bonaire is the most Dutch of all the islands that belong to the Kingdom of the Netherlands. Dutch is still widely spoken here, although there are a lot of shops, commerce does not dictate  everything yet and you are still able to ashore and find unspoilt areas in the town centre. Most of the guests when going ashore will focus on the beach life. The water is clear here and the sand is coral based so very white and fine. Plus if you want to you can swim right in front of the ship. The area is completely pollution free and so is a Holland America ship with its zero overboard policy and thus………Why not?  And thus Yes, a lot of people where exactly doing that.

Bonaire is a little bit curved and in that curve Kralendijk is located . Right across from the berth is a small island called Klein Bonaire. (Klein = Small) It is un-inhabited and people can go there for the day.

Sailing away  is a very simple affair. The ship is being held alongside by the thrusters and the Azi-pods and the long lines are being pulled in. Then we just stop everything and apply the –blow away manoeuvre- which means we let the wind do the job of getting the ship away from the pier and into deep water. Then we can just sail away. That whole evolution takes only about 5 minutes and the bridge can go from Port mode to Sea mode.

Tonight we will sail slowly westwards towards Curacao as that island is not far away. As a matter of fact during the night you can see the lights against the horizon. We will dock there tomorrow morning around 0700 and we will be at the Mega Pier.

Weather: more of the same. Hot and Sunny.