Today we had our sea day, crossing the Caribbean Sea on an almost southerly course (175o to be precise). From the Mona Passage, outside Samana, to the Westside of Bonaire. Our next stop Kralendijk on Bonaire is located at the south side and thus the Noordam will curve around the island and come north again to approach the pilot station.

We have the regular trade blowing but it is not very strong, only about 15 knots, which is the average Trade Wind standard but in the last few years the wind has been blowing a lot stronger than that average. So I was quite surprised. Today it might not have been such a bad idea to have a bit of a stronger wind. It would have brought a little bit more cool air onto the decks. Tomorrow the captain will be very happy if the wind is not as strong as the ship will have to move sideways towards the dock with the wind full on the port beam.  So a gentle breeze is hoped for.

With the wind on the port side it was not ideal for birds to hover around the ship but we did see a lot of flying fish coming out of the water. Our relative slow speed of 12 knots probably created the perfect bow wave to lift them out of the water and carry them for a considerable distance skimming over the ocean surface. 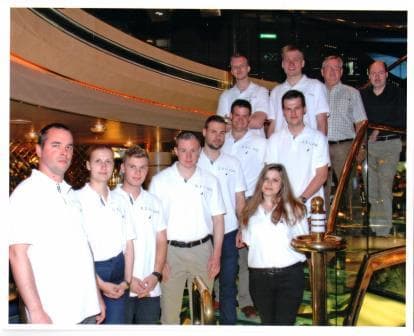 The Nautical and Engineering Excellence Classes together with Trainers. Looking after the Engineers is Mr. Willem Dullaert (Ch.Eng Ret.) 2 Ladies and 8 Gentlemen.

We are now entering the 3rd week of the training school we have going with six prospective deck officers and 4 prospective engineers and as we have slowly worked our way through all the theoretical material the focus is now shifting to practical. That practical stuff is done via Touch Drills.  This means that we act as if we are doing something but we do not push the buttons. We touch – not push. It is a very clever way to have new officers going through the movements which they have to make if a real emergency would occur. It would not be the first time for a new officer to freeze when the first emergency telephone call comes in. All the knowledge is in the head, all has been explained but now you have to do it. It is the same as driving a car all by yourself for the very first time without a driving instructor or family support. You are it, there is nobody else.

So we do touch drills. To give an example:  there is a fire somewhere in the ship and a crew member phones but the smoke detectors have not yet gone off on the bridge to indicate where this fire might be. The crew member is of course excited and says nothing else but Fire, Fire, lots of smoke.

Step 2: Company policy demands if an actual observation is phoned in, we ring the fire alarm. Thus we simulate touching the button.

Step 3: Make an announcement for the guests about the alarm; advise that we are investigating an occurrence and that the Emergency Teams are assembling.

Step 4: Send the first response officer to secure the area.

Step 5: If needed change course/ speed in case smoke is coming out of the ship.

Step 7: Call the Master and be prepared to give an initial report with all info known as of yet.

Step 8:  Now get the check list to see if you have not forgotten anything and continue with the rest.

Time elapsed between step 1 and 7, approx. 45 seconds depending on how long the announcement lasted.

To accomplish all the steps quickly, the Trainees have to run all over the bridge and go through all the motions. If I can get that down to a routine, they will not freeze or be nervous when that first dreaded telephone comes……., as it will one day. We will continue to do these drills in the coming days as I have about 20 scenarios’s which we can play and I want to build up routine.

Weather forecast for tomorrow:  Mostly sunny, Temperature in the mid 80’s (30oC) and a nice Caribbean Breeze.  Bonaire is the most Dutch of all the islands in the south Caribe, so it will feel as if we are in Holland but with a heatwave.