The route last night was a bit of a Zig Zag.  To leave Grand Turk safely, the ship first had to sail to the South west until approx. 18.00 hrs. to avoid yet more Bahama Sandbanks. Then it turned to the South East to head into the General direction of Samana and after following the coast line to then turn west to enter the Bay. Samana is located in a sheltered bay on the North East side of the Dominican Republic.  Holland America has been calling here for the last 10 years as it offers a great combination of beach, jungle and whale tours. The area is also well known for making cigars and that also attracts people. 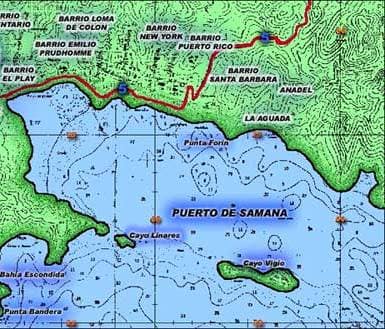 We face the challenge that there is no dock and thus we have to tender. Also tender a fairly long distance and as well the far end of the bay is shallow. Even when the ship sails in, it is through a natural channel which is not so wide that a ship’s captain is really not happy about it. Before the cruise ships came here it was already a resort due to its beautiful beaches. With the arrival of the cruise ships the Shore Excursion industry has really taken off and that provides much needed extra income for an area that is not very well to do.

Between January and March the bay can be very well populated with Hump Back whales that arrive here to give birth to their young. Thus the chances to see Whales are excellent around this time but it will be glimpses as the new mothers will be busy with their calves. Too busy to start splashing around as we are used to seeing in Alaska in the late season.

We love whales and we love them especially if they do not come too close to the ship.  That does of course not always happen and then we have to insure that we stay out of their way and not disturb them.  Hence I was busy today with teaching my class how to avoid whales. Avoiding whales in Samana Bay but also for later in Alaska.    Holland America has very strong and clearly defined policies of how the Navigation Officers should deal with whales.  To be able to implement those policies you have to know a little bit about the various sorts of whales and their behaviour. 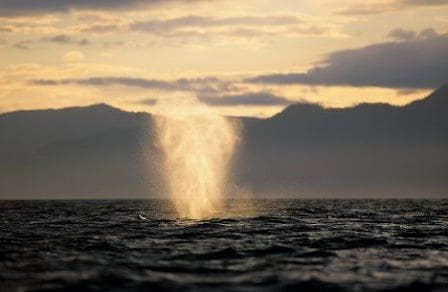 We focus on the ones which we most likely will see and which most likely could be an issue. This means mainly Humpbacks = very active, Right whales = not very active and Orca’s = travelling in groups.  Step 1 is to recognize the whales and then watch where they are going; Step 2 is to decide what action to take. For the humpback do they remain at the surface (tail fin does not come up) or do they dive?  If they continue moving, we slow down and try to go behind them, or just wait.  Right whales are not very active and do not pay much attention to anything (hence they are very scarce nowadays as it was so easy to catch them) and if we see them; we slow down and sail around them.  Orcas are very intelligent and very active. Not much chance to hit them but they can travel in large family groups or Pods. We do not want to sail in between such a Pod for the danger of separating them. Hence we slow down and carefully observe. The problem with them is that they are very inquisitive and will come over to have a look at that strange tin can full of people. That can result in having to float for a while until they move on.

This morning we saw a few whales at a mile away but they were hard to recognize as they did not come much above the water surface and in the sunlight it was difficult to see the shape of the spout, which is for some whales is very distinctive.

By 17.30 we were on our way again and are now heading East until we clear the East side of Hispaniola (which is made up of Haiti and the Dominican Republic). Then we head south through the Mona Passage with the island of Mona on our port side and venture into the Caribbean.

Tomorrow is a sea day and we are expecting partly cloudy skies, Temperatures of 27o C/   81oF and we will be sailing with the wind so it might be a touch warm on the outside decks.