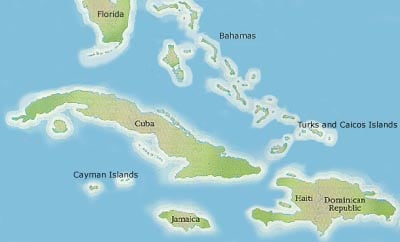 Today we were in port with the Carnival Sunshine. This used to be the Carnival Destiny but after a major make over and upgrade it was decided to rename her the Carnival Sunshine. The reason for seeing a Carnival ship here is the fact that the Pier was built with the assistance of Carnival. Before the pier it was virtually impossible to call at Grand Turk because of the ever present swell and the difficulty to anchor safely at the edge of the reef.

Neither was the tender pier very good. No cruise company is going to add a port of call to the schedule if they know that the Captains are cancelling 9 out of 10 calls. As there was one stretch of beach area where the shallow part of the reef was extensive enough, or better said long enough, to construct a cruise ship pier, Carnival invested. Not only a Pier but also in a little village near the pier. The town of Cockburn is a little bit further away for the more enthusiastic explorers but the beach is just next door. 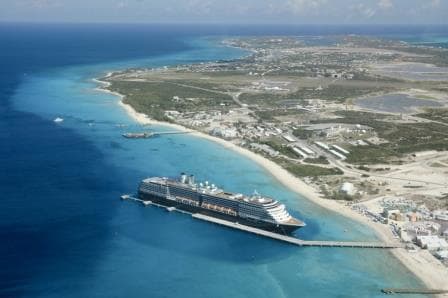 Please note the small dark blue area around the Noordam. On a windy day there is not much room to drift. (Photo courtesy Holland America Stock photo)

Since the pier has been constructed the ships only cancel on average 1 out of 10 times as sometimes the wind is too strong to attempt docking. If the area around the pier was deeper, there would be more of a chance but the dredged area is just wide enough for a cruise ship to slide in and out but not to be able to blow away in case the ship loses the battle against the elements. 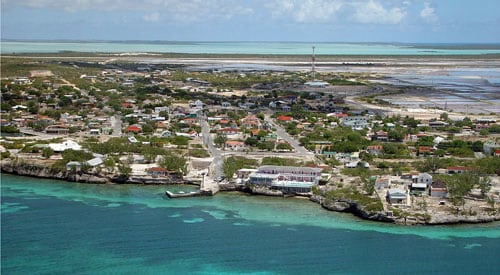 The town of Cockburn. In the centre the tender pier for ships to use.

There was little chance of this happening today. There was a small and gentle breeze blowing but nothing that would even come close to a strong wind and at noon time the Noordam was docked for an afternoon call. Not a very long stay, only six hours, but for a beach call it is long enough as everything you want to do can be done in those hours. Apart from beach and water sport related shore excursions there is the option to fly over the Island and scenery by helicopter or go by Bus or Trolley Train around the historic spots on the island. Apart from the pier and the town, the cruise centre has a size of 14 acres with a large (sea) pool area to while away the afternoon.

Also here Columbus is present. Although they do not really claim that this is the spot where he landed for the first time, they have proof that he was here, as one of his ships the Nina was shipwrecked.  There is also an historic lighthouse but it arrived only 150 years ago so it would not have been of any help for Columbus. That lighthouse is a sort of a Ikea happening. It was constructed in the U.K, then disassembled and shipped to the Island and then put together again.  It is standing on the North point of the island guarding the gap between the Sand banks and Grand Turk Island. It was also the opening the Noordam used to come in from the North today and to get to the south of the Bahamas while stopping in between at Grand Turk. And of course as it was a British Island there is a 18th. Century prison as well. It seems somehow when an island is occupied, one of the first things being built is a prison. No self-appreciating Governor should be without one.

This evening we will continue our journey to the south East leaving all the big and small Bahamas behind and aim for the Dominican Republic. Tomorrow we will visit Samana which is located at the North/East side of the island. This means we first go SSW to get clear of the last cays and sand banks and then SE for Samana Bay.

It will be a tender call with a very long tender distance as well and that makes it difficult to get everybody off just after arrival. The captain already advised everybody on departure, that those who were not in a very big hurry could better wait until after lunch and leave the first two hours to those on tours and those who really cannot wait.  Those who stay on board might see whales’ frolicking around in the area as it is a location where whales are frequently spotted.

We will be there from 10 am to 5 pm  and it is going to be another warm day, although about two degrees less than today.