Today is our second day at sea and we are now firmly embedded in the Old Bahama Channel between Cuba to the south and the Bahama Bank to the north; and that stopped any swell out there. As a result the ship is now as steady as a rock and we are having a wonderful day at sea. We have a following wind, so there is only a gentle breeze on the deck as the ship is almost traveling at the same speed / velocity that the wind is blowing.  Going this way, we have the current with us, as this is the current that will eventually join the Gulf Stream in the Straits of Florida. It is given us a push of about 0.7 knots per hour and that translates roughly in an average of a 0.5 knots all the way from St. Thomas to Ft. Lauderdale. Yesterday when we were in the open there was a lot less water current and early tomorrow morning when entering the Gulf Stream there will be a lot more. But a following current saves speed and thus fuel, so our Chief Engineer is a happy camper.

The cruises we are now making where put in place, after the scheduled cruise season to Cuba came to a halt when the US Government changed its policy. This does not mean that we are now sailing empty, on the contrary we are still sailing full, but now we have a large number of guests on board who are coming for the ship and the Holland America Line experience and less for the destination. Hence we have on board a larger number of CVG guests (Continued Voyage Guests) who grabbed the opportunity to do both the West Caribe cruise and the East Caribe cruise by staying on board for 2 weeks. And then of course we have a few who stay on board for even longer. We find those on every HAL ship and they have found out that cruising is much more fun than being at home, especially if home equates with cold temperatures and or snow.

All those guests are or become very quickly Holland America Line Mariners and for that we have a party and a luncheon. Challenge is that with so many on board, the ship is running two luncheons which keeps our Culinary Department really on their toes. During the party the medals are handed out to those who reached the next step and today I met a couple who booked a 3rd cruise onto their two cruises as they then would reach the next milestone and medal. Now their focus was on the next achievement “free laundry”. I leave it to the readers, who are in the know, to figure out what Mariner level that is. But I am still amazed and very grateful (as the guests pay my salary) that Holland America has so many guests with so many days. 500, 700 days and over are no “seldom event” but quite a regular occurrence. I am a mariner myself, I have 21 days, courtesy of making a few cruises in the grey mists of time when my wife when I took my mother and her parents on a few cruises Unfortunately my sailing days as an Holland America Line Officer and Captain will not count when I retire otherwise that would give me a lot of Free Laundry.

This mariner program has been around since 1971 in this current form and setup, although in the early days we had certificates in three steps and two sorts of medals for the number of miles. It was a good start but not a fail safe operation as people could get confused between cruises and miles. So then the day system was introduced and with medals only which gives a much clearer picture of what a guest really has accomplished. 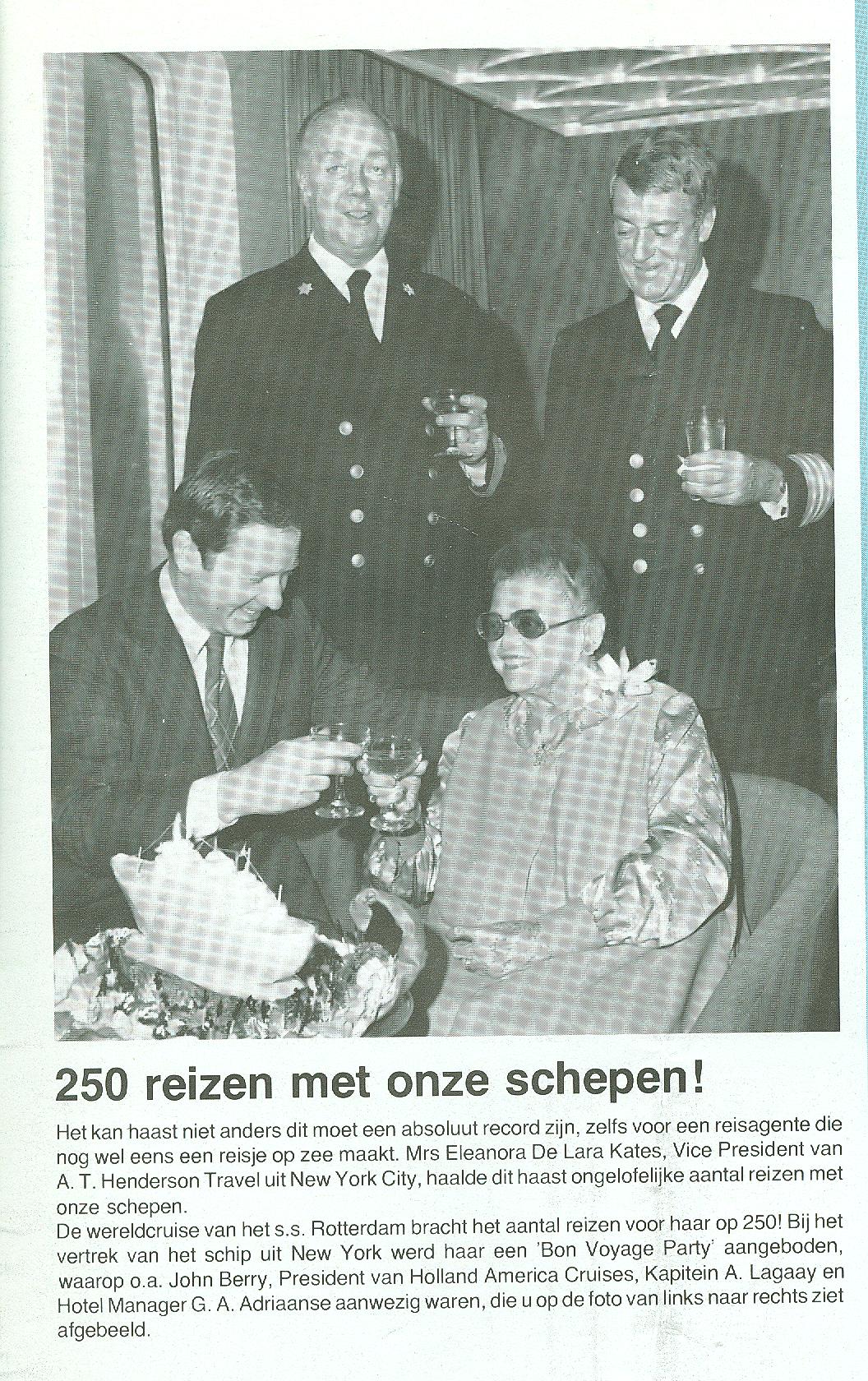 This lady managed somewhere in the 1970’s to clock up 250+ cruises. Unclear is how long those cruises were, 7 days, 10 days a 100 days ? The caption reads: It can hardly be otherwise but this must be an absolute record. Even for a travel agent who makes a voyage at sea once in a while. Mrs. Eleanora De Lara Kates, Vice President of A.T Henderson Travel in New York City, reached this hard to believe number of voyages with our ships. The world cruise of the ss Rotterdam brought her total to 250. On departure of the ship from New York, she was given a “Bon voyage Party” which was attended by the President of Holland America Cruises, John Berry, Captain A Lagaay and Hotel manager G.A Adriaanse, on the photo from left to right.

Before 1971 there was also a recognition system but with all my research I still have not been able to find out how that worked. But on occasion marketing popped up with somebody who had achieved a certain mile stone and this was then recognized on board and in the company’s publications. For those people there were also gifts, mainly in Delft blue but again I have not been able to establish who got what at what stage of their cruise achievement.  Maybe one day I will come across a file that explains all.

But passengers / guests being recognized has been around for a long long time. If you read the memoirs of Captain Haagmans (under Captains of the Past on this blog) on this blog, then you will see that he mentions that his uncle around 1900 made frequent crossings and was recognized by the company for doing so.

Then there is the crew, and for them we also have a recognition program but that is another story.

Tomorrow we are in Fort Lauderdale and we will be together with the Zuiderdam. So it will be a Holland America Line day in port. My blog will stop for two days as I will be transferring to the ms Rotterdam which is on her way to Curacao. I know she is, as she passed us this morning sailing southbound. Thus I have to catch her by flying to Curacao and join her there. The ms Rotterdam is currently making Panama Canal cruises between Ft. Lauderdale and San Diego so we will be moving away from the Caribbean with the daily happenings. So the blog will stop for two days, as writing a blog about sitting in an airplane is not really that exciting.