When I mentioned yesterday that we were going to take the Old Bahama Channel route to evade heavy swells, I forgot to say that we first had to get there. So after departure St. Thomas we had a lively night as we were still in the North Atlantic Ocean. Then by 11 am. we came under the lee of the Turks and Caicos Islands and that took most of the swell away. Now we are sailing North of Hispaniola and the ship is it’s steady self with only a slight movement caused by the regular swell that runs here anyway. This swell is caused by the Trade Winds that have been blowing again on a regular basis and that eventually creates some higher waves. But being south of the Bahamas for the remainder of the cruise means that what is generated at Cape Hatteras cannot reach us. 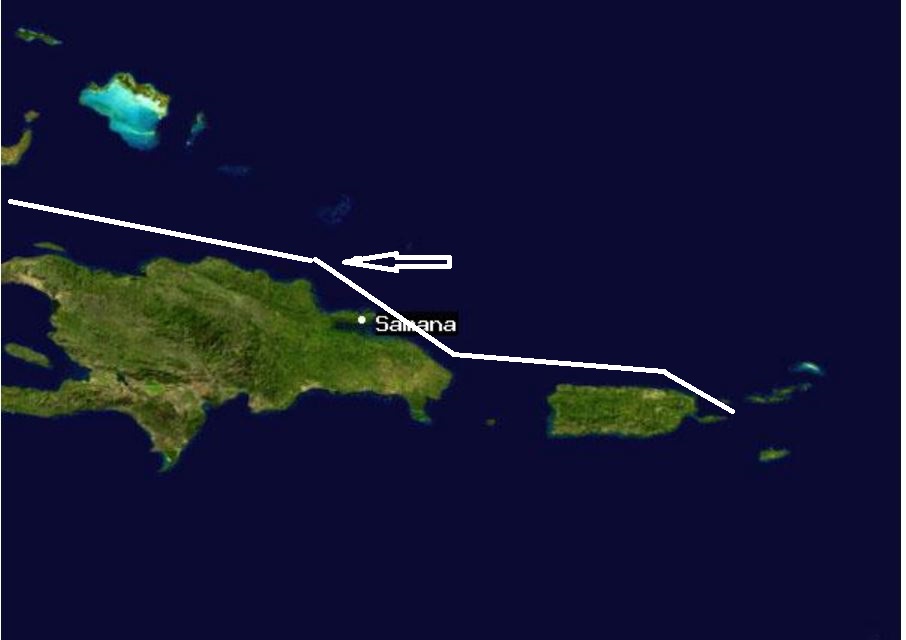 Location of Samana at the Eastern side of the Dominican Republic.

When sailing this way, we pass north of Puerto Rico and the large island of Hispaniola which is made up of Haiti and the Dominican Republic. We passed the east side of the Dominican Republic just before lunch time and that is where the bay is located with the port of Samana. The bay is a living and congregating area for Humpback Whales and we did see them this morning. One was very active with bubble feeding the other one disappeared as soon as he/she heard our ship.  You can see humpback all over the place but they are normally not that conspicuous as they are on the way to somewhere. The area near Samana is a gathering place and thus they do not swim away but frolic around in the area. 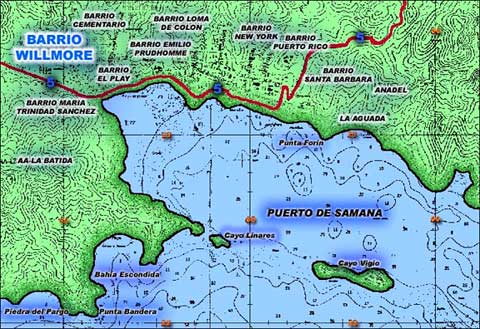 Samana Bay. This where the cruise ships and whaling trips depart from.

We know that they are there, so as soon as we come near the area where they are expected we go to a higher gear of keeping a good look out. Legally required is that you keep a good look out at all times. But it is allowed during day time to only have a navigator on duty. At night there should be a second person. These are the minimum rules so cargo ships with small crews can comply. That does not work for cruise ships, we always have 4 people on watch at sea. One Quartermaster for the look out, one quartermaster on standby for coffee and steering, one assistant officer of the watch and one officer of the watch. Once we are in a whale area, the 2nd quartermaster goes to full look out and that means that the captain has to pour his own cup of coffee. The Assistant officer of the watch stops his /her administration and devotes that time also to looking out of the window. Looking at a small object in the water takes another level of lookout than just keeping an eye out for (big) ships. Also the Engine Control Room is on alert, in case we suddenly want to slow down. 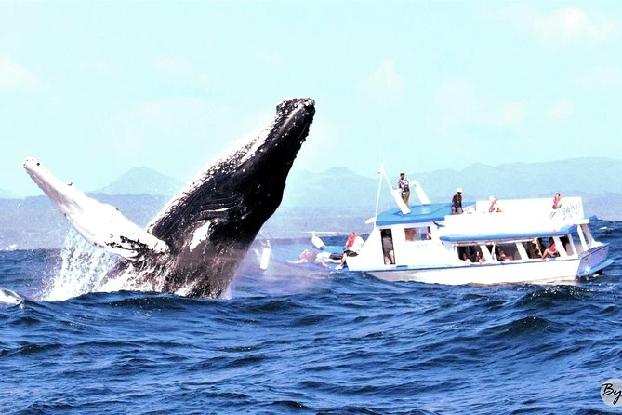 We see the same sights sometimes, although we do not come this close. I think the boat skipper is putting a lot of trust in the whales staying clear of his boat and clients. (Unknown source on the internet)

Once whales have been observed, the first thing to find out is, which way the whale is traveling. With humpbacks that is not so difficult, you can clearly see the “hump” above water moving one way or the other. For whales who swim with more of a straight body it is much more difficult to see and we have to keep a close eye on the spouts. Most of them blow every 2 minutes and two blows normally gives enough guidance to know the heading. Unless the whales are feeding or playing, they normally do not change direction.

If we cannot figure out which way they are going and/or they are playing nearby, then we first slow down to 10 knots, put a quartermaster behind the wheel, and then try to change course to the best of the input that we get from observing them. The science people have figured out that speed below 10 knots seems to greatly reduce the chance of a collision with a whale as they have more time to hear us. It also gives us more time to get out of the way if we can figure out what the whale is planning to do. This works with most whales, except with the Right Whale. They seem most of the time completely oblivious of what is going on around them, hence that there are so few left from the post whaling days. And even now the numbers are very small. So for those whales there are exclusion zones in their gathering areas. as off Boston, Savanah and Florida.

Today we did not have to do anything. The whales heard us and they disappeared from the surface. Once past the east point of the Dominican Republic we did not see them anymore.

Because of the storms that had been blowing to the north, some (relatively) fresher air had come down to our area and thus the land of Hispaniola was clearly visible. Still being 4 to 12 miles off the coast, with a good pair of binoculars you could see the people walking in the streets. Later on that became more difficult as the sun shone from the opposite direction.

Tomorrow we have our second day at sea, and we will be sailing along the coast of Cuba. Weather should be the same but there is a weather front coming over the prairies and Mexico in our direction and if it does not pull up to the North, we might catch the rain in the tail. 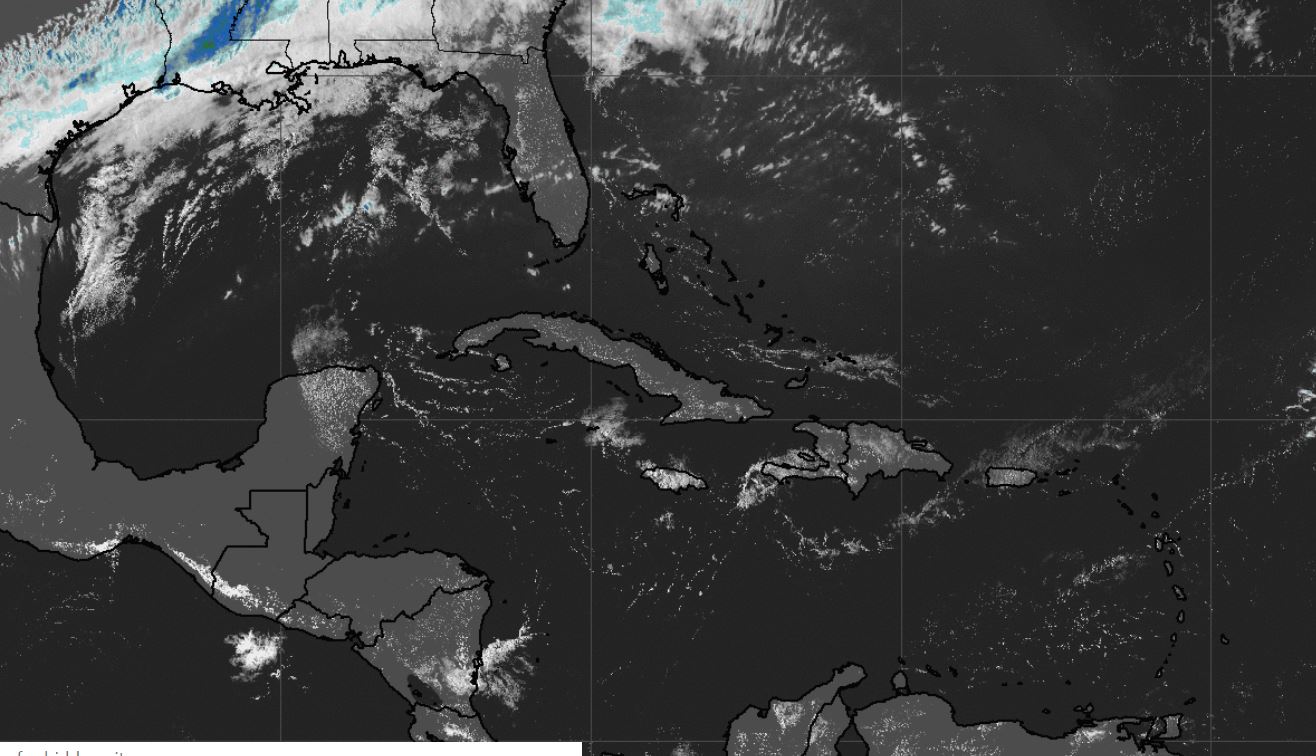 The weather picture today. The grey band to the west carries quite a bit of rain and that might come towards us. (Photo courtesy www.wunderground.com)