St Thomas considers itself the cruise capital of the world, due to the number of cruise ships calling here. But today there was little of that noticeable as we were the only ship in Havensight. For the shop keepers disappointing as the area is geared up to handling 10 000+ guests a day and then only having 1200 is not very exciting. On the other hand you can give some of your shop staff a day off before they roll in again in their thousands.  But at least for us an empty pier worked very well, gangway right across the main gate into town, what else you ask for. 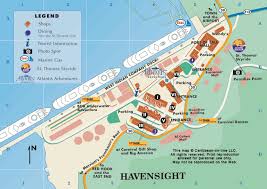 Havensight can take 3 Mega Liners or 4 or 5 smaller cruise ships but today we were the only one and docked right in the middle.

I have now been coming to St. Thomas since 1981 and through the years I have seen it changing. What is to be expected, shopping malls have to adapt to the changing tastes of the public.  Havensight expanded greatly in the last 20 years. I remember being there with the ss Statendam just before Christmas 1982 and we were with 11 ships, putting 5000 people ashore. St. Thomas could hardly handle it. Our Statendam was with its 700 guest’s one of the larger ships in port. Then I was there again on the same day in 2002 with the Maasdam and again 11 ships, now putting over 16000 people ashore.  St Thomas could handle it apart from the road around the bay. That was just a slow moving traffic jam of taxis and shuttles. Now the Maasdam was one of the smaller ships in port and we had to anchor next to the Norway all the way outside.

What gave me the inspiration today for this blog, was this afternoon while passing the gangway. The bar tender collecting the booze purchased by the guests ashore. It is common practice in the cruise industry to collect alcoholic shore side purchases and they will then be returned on the last evening of the cruise. What struck me, was the difference with 1981.  First of all the lack of volume, but secondly the brands and quality.  What was cheap and volume in the 1980’s now it is one bottle but higher quality or an exotic brand which is worthwhile the hassle of taking it home. 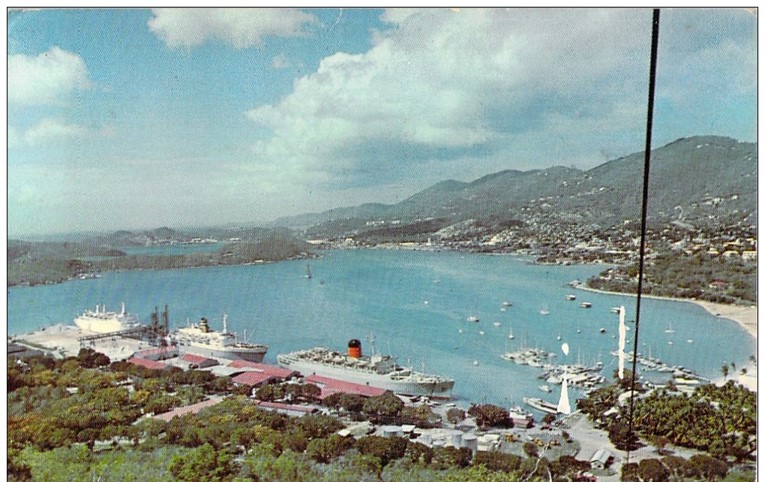 Even in the sixties it could be full in St Thomas. Here the Caronia or Franconia from Cunard, the ss Statendam (IV) of Holland America and the Shalom of Zim Lines.  Note the gantry crane over the dock; as Havensight / Wico Pier started out as a cargo pier. (Photo Courtesy Mr. Cees Schuller)

In 1981 (if we were at anchor) I was the assigned officer to go with the tender to the shore (in the forward corner of the dock where we are docking today) Then there was something there called the Pink Hotel, very much favored by honeymooners but it was torn down sometime after 2000. This ‘booze tender”, manned by yours truly, the cadet, an engineer and two sailors, then came back with at least 200 three bottle boxes on a guest average of 700. In those days you could carry by hand into the airplane and a lot of guests did not seem to mind to sit for 3 or 4 hours with a box of liquor on their lap and save 30 dollars or so. With all those boxes there was always a free box for the captain, the Hotel manager and the Purser, something that we as the “booze team” found very unfair, especially as the ships staff did not share and they really did not need it as they had a free company expense account. Something we as juniors did not have. 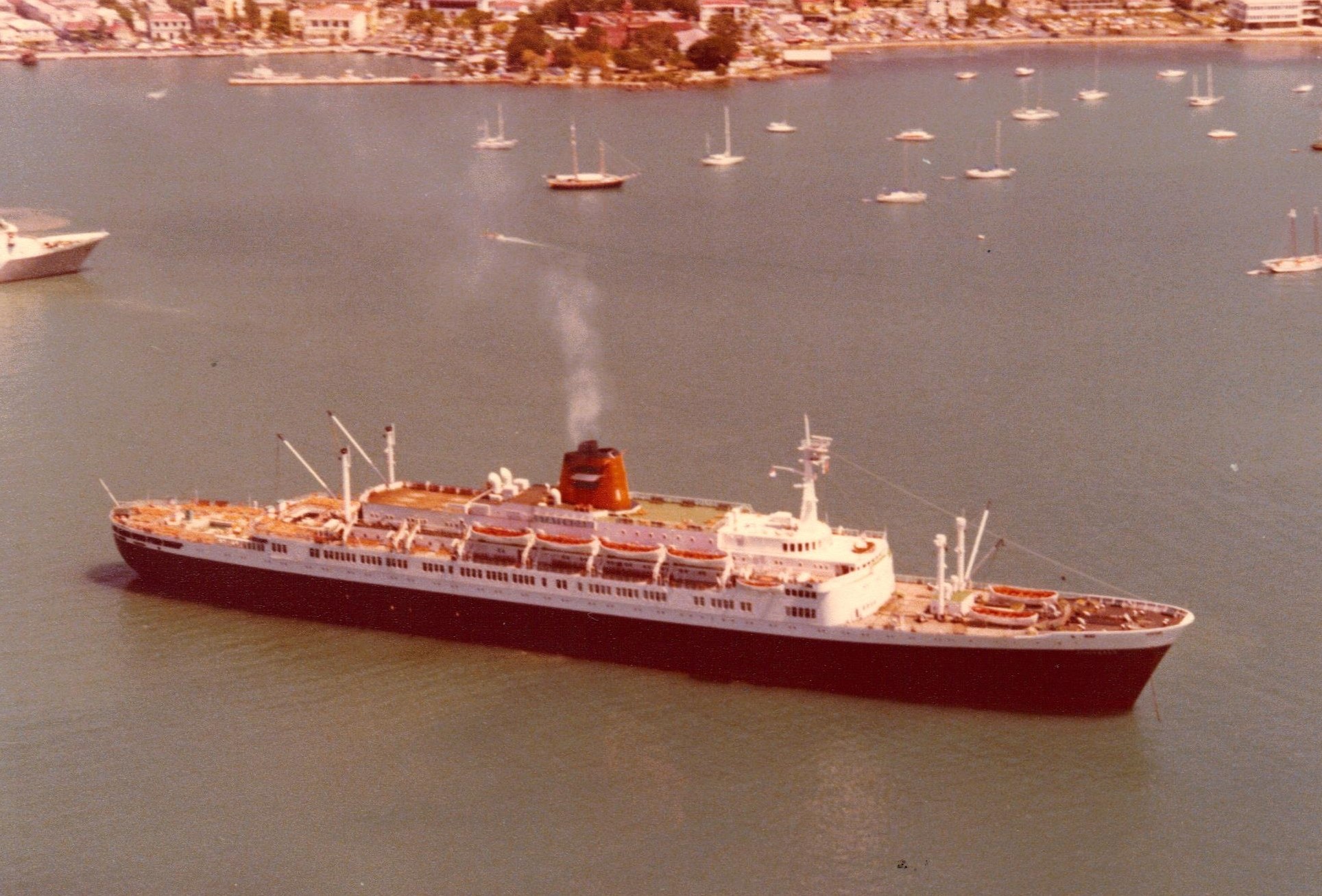 The same ss Statendam as above, but now as I know here, at anchor in Charlotte Amalie harbor. This  was taken sometime in the 70’s. Note the two lifeboats on the forward deck. They were removed from their davits if the ship carried 4 tenders.

So many a time these boxes did not reach their final destination but did greatly enlarge the camaraderie among everybody on board. I always remembered that and made it a point then when I became captain that I would share. And I have always done so. All the gifts (mainly food and wine) that came to me via the agent or the shore excursion operators, went in a raffle (guess a number under 20) among the deck officers during the voyage planning on the bridge. I never drank as a captain while in command, so it took me a while to realize that the deck team were always very excited for the raffle when we were in Santorini where I always got 2 bottles of white wine. And that wine is very good and very expensive if you have to buy it away from the island. One 2nd officer was under strict orders from his wife to bring those bottles home to please her mother. Mrs. Mother-in-law. Hopefully it helped to keep the marriage happy.

While alongside, the ss Statendam IV did maintenance. Nothing new as here also today we had maintenance going with a 80 feet high cherry picker for white paint touch up. I have forgotten the names of the two cruise ships behind.

The good ship Veendam sailed at 18.00 hrs. from St Thomas with the whole port to itself and then set sail for Fort Lauderdale. We will have two nice days at sea, although there is the forecast for some rain. The captain is taking the “inside” route back through old Bahamas channel as there is a heavy swell running on the North Atlantic, coming from Cape Hatteras, with a golf field extending more south than it has done recently. So why should we bump up and down all the way back to Fort Lauderdale if there is a quiet route.  It is costing us a bit more petrol as it is a longer route, but the comfort of the guests comes first. 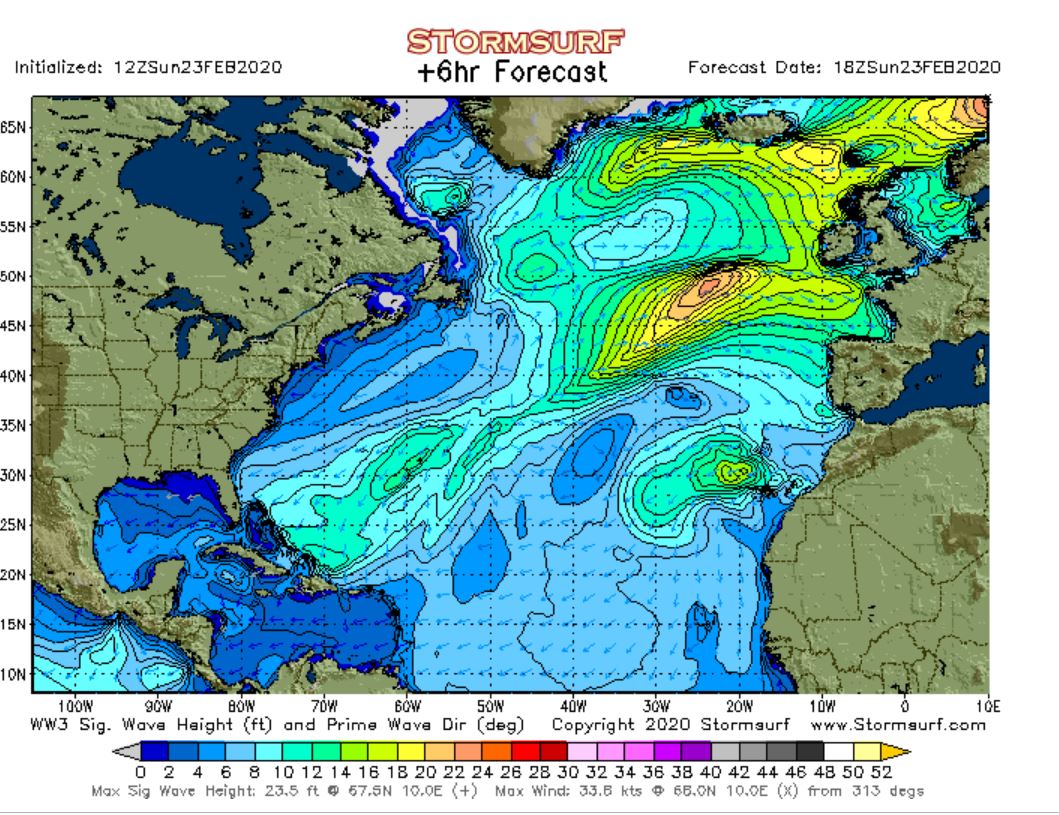 The North Atlantic swell as currently above the Bahamas. Swells of up to 14 feet rolling against the ship. Can cause a very nasty movement. so we are staying south, happily sailing through the blue bits on the chart. (Diagram courtesy www.stormsurf.com)