San Juan is blessed with one of the best and largest natural harbors in the Caribbean. Hence the very apt name, Puerto Rico = Rich port. The Spanish were quite quick to realize its potential and built very quickly a large fortress – Morro Castle- at the entrance to the port / bay to keep the enemy out. They did something similar at Cartagena, a port with again a narrow entrance (Boca Chica) and a very large bay and sheltered harbor behind it.  So this morning when we sailed into San Juan we did so while sliding past the guns of the castle looming high above us. Guns so close that it would have been impossible to miss us if they would have gone off. The fortress proved so strong that neither the Dutch, nor the French, nor the British could get at it. 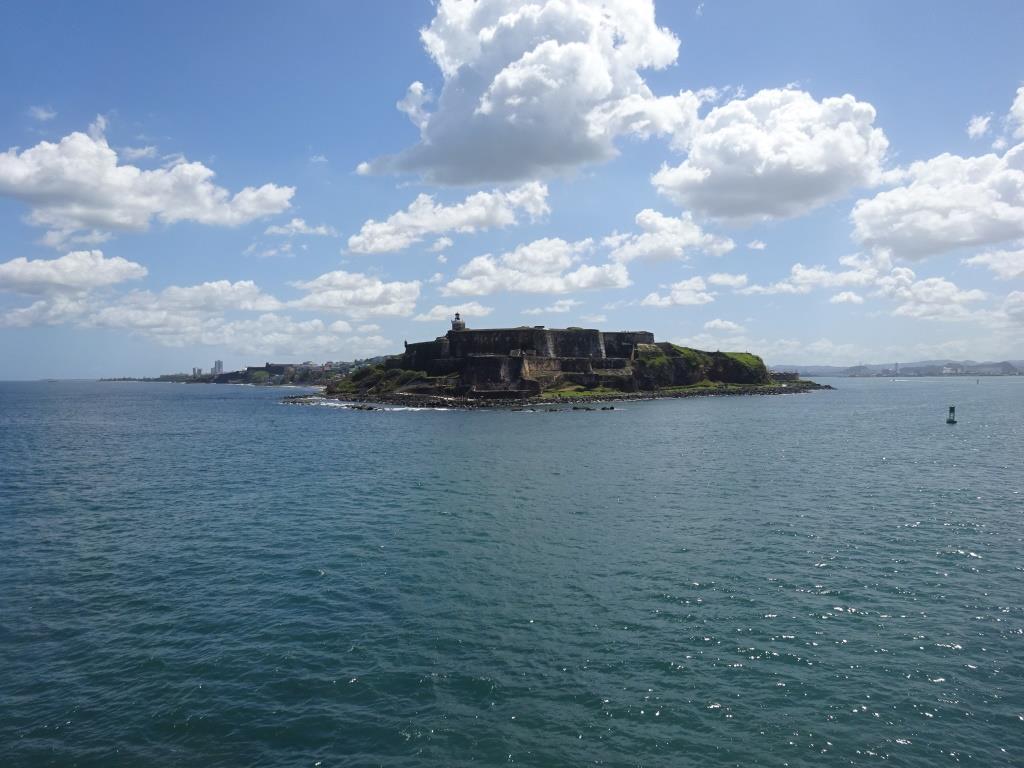 Moor Castle as seen from the ship. Once abeam of the rock, the distance is not more than 500 yards or so.

It was finally taken in 1898 when the Spanish USA war broke loose over the Spanish holdings of the Philippines and those in the Caribbean and by then Spain was a much diminished international power and eventually Puerto Rico became part of the USA.  Holland America was sideways involved with this. First of all the war forced the company to change the funnel colors from black (with green white green stripes) to yellow (with green white green stripes) to ensure that the Americans would not be shooting at the HAL ships as the HAL colors came very close to those of a Spanish shipping company. 2ndly the USA bought one of our ships the ss Obdam to provide transport for the American troops. (That story you can read on this blog under the TAB:   )

The yellow funnel colors which we kept from 1898 to 1973. In the days before radio communication the only way of recognizing a ship was by its flags and funnel(s)

We entered San Juan under a most perfect day at noon time. That is about the earliest we can reach this port when coming from Grand Turk due to the distance. Then it is a short distance into the port as the docks are directly around the corner once inside. At that corner you have the USCG station which I think is about the most prime real estate position the USCG has in the whole world. No doubt there would be somebody quite excited about building a hotel at that location. But it is a very good location as it is close to open sea for Search and Rescue and for protecting the harbor entrance as the USCG is involved with that as well. (For a port such as Key West, which is further inland, they normally have a boat on station at the sea buoy, but here the USCG station is almost on top of the sea buoy)

Sailing in is nowadays done mostly by looking at the radar as they have a chart overlay. I still prefer to look out of the window as I am a bit cynical in thinking that at the most inconvenient moment the fuse might blow and the system might stop, although there is a backup. San Juan, has a very good harbor, has leading lights which indicate the middle of the channel and the right course line. Keep the lights or beacons/beacons in line and if you are in line then are in good shape. Because of this leading line and the straight course it is possible to sail into port with wind force 8 or 9 on the beam as you see exactly how much your ship is drifting. Drift depends on your speed, keep the speed up and you drift less as the wind has less influence and then charging into the entrance with 14 knots solves all problems. Once inside you have more than enough distance and time to reduce speed to get the pilot on board. 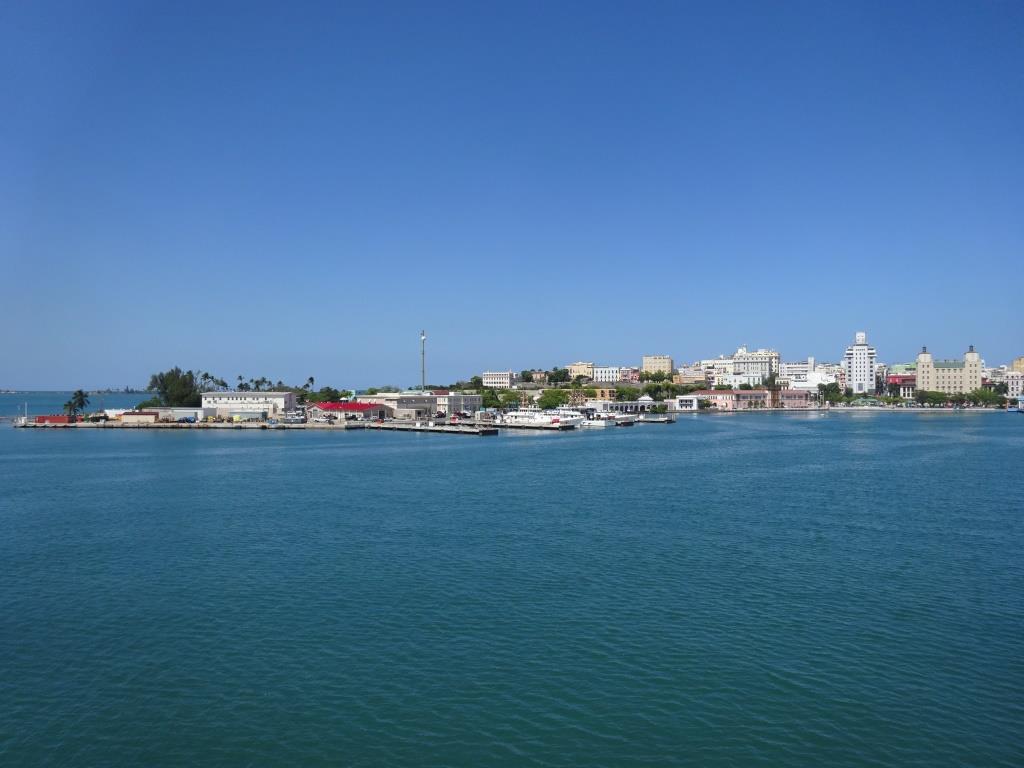 The USCG station at the corner. There are always a few cutters or other boats at the ready for quick dispatch if needed. Morro Castle is directly behind the radio mast and the high rises.

Because the docks are in the opposite direction to the way you come in, the ship has to make an 180o turn while doing so and that helps greatly for slowing down if you have come in with a high speed to offset the wind.  Ferries do this all over the world, to lose as little time on their schedule while docking and undocking. Finnish ferries are particularly good at it. If you visit Helsinki or Tallinn you see them coming into port with 20 to 25 knots, start the turn with this speed and by the time they have to give astern the speed has dropped already by 50%. Looks scary but it is carefully planned with the exact knowledge of what the ship can do and how much room the port has.

We were docked by 13.00 hrs. Starboard alongside and the Staff Captain was a happy man. Two cherry pickers were waiting at the dock side and a large group of sailor’s standby ready to run as soon as the ship was docked to start working on the outside hull.  I was shortly after in the water with a Tender with the next group of sailors for the Re-qualification as tender driver. Happy to say they all passed so the ship will be ready for Europe if tender service is needed there.

We are staying here until 23.00 hrs. and then do a 90 mile hop to ST. Thomas. According to the schedule we are the only cruise ship in tomorrow and thus we can park the ship where ever we want. And that will mean putting the gangway as close to the exit gate as the local authorities will allow.

Weather: Sunny 82oF. 28oC and a gentle breeze from the South.