There is a difference between the way we as sailors see the weather and the way the guests see it. For the latter, it is nice, or it rains, or it is cold or a combination of the various options. For a sailor, especially a ship handler, it is not important if it is cold or sunny or gloomy; it is all about the elements that have a direct influence on the ships behavior.  Wind, Swell and Current. 14 days ago the guests had a great day at Grand Turk, although we had to share it with a mega liner from Carnival. Today we had an even better day as we were by ourselves.  But for the captain last cruise was a very bad day as docking was on the edge of what was possible with the Veendam. Strong winds from the wrong side so when docking we had to push full power against the wind to get alongside. The current made it even worse and the help that the Carnival ship could have rendered by acting as a wind breaker, did not happen as she only arrived 2 hours later. Then today things were much better. First of all we docked at the other side of the dock, so instead of pushing against the wind, we could break the momentum that the wind was giving the ship, which is much easier; and there was a lot less wind, swell and current, so everything was well within the parameters of feasibility.  On top of that as a bonus for the guests, we were the only ship in port today. So all reserved solely for the 1200 guests we had on board. 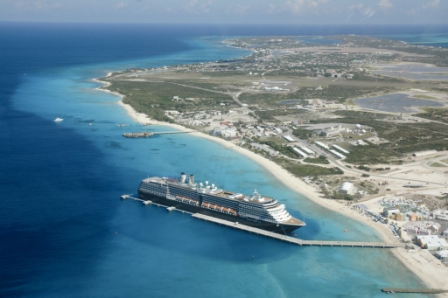 2008 when the ms Noordam officially opened Grand Turk Resort. Note the deep water basin carved out of the sea bottom is barely twice the width of the ship. so you can not drift much on wind and current without the danger of  becoming a hotel.

Once you have docked a ship safely, and do not foresee too many problems for departure (as long as the wind behaves itself) then the next thought goes, how about the next port?  Our next port is San Juan where will arrive tomorrow around 13.00 hrs. A little bit depends on how much wind and current we will have against us tonight as it is speed wise a very tight run. San Juan is what we call a sheltered port which means that we can sail in with a lot worse weather than in other ports. You do not go into St. Thomas with wind force 8 or 9 but sailing into San Juan is not a problem as the Fortress and the old city gives you shelter. Once inside there are tugboats to help to line up and to get alongside one of the cruise terminals. 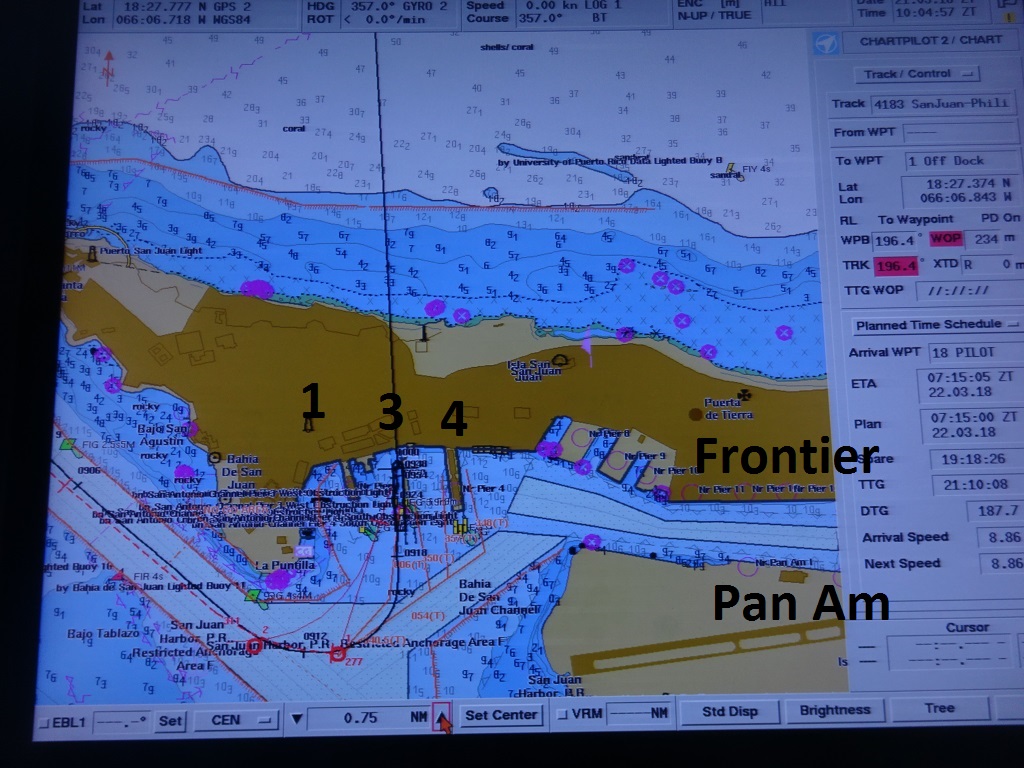 Of those terminals there are 6 for cruise ships and they vary in quality. Piers I, 3, 4, and 6 are in down town the two others are on the airport side.   Terminal 1 can be used for home porting and a lot of smaller cruise ships change passengers here.  Pier 2 is a small ferry pier and then not in the numbering. Pier 3 is what they call an in-transit pier, which means it is not really good for change over day, but it can handle the mega liners. Pier 4 is managed by Carnival and is used for both, in transit for the day or turn around.  Then there is Frontier Street Pier which is on the side of the old town but more to the East. So you can still walk to downtown but it is a 20 minute walk or so. That pier is normally used for “over flow” of in-transit cruise ships as it has no facilities and it is not in that an exciting state.

Then opposite Frontier Street there are two cruise terminals, called the Pan America Pier, so better said 1 terminal but it can handle two cruise ships as the dock has a length of 2000 ft. These are used for Change Over day for larger cruise ships and the location has been chosen as it is much easier to get to the airport from there as from the Downtown side. (Puerto Ricans seem to love driving in Traffic Jams and they practice their art big time on Front Street) 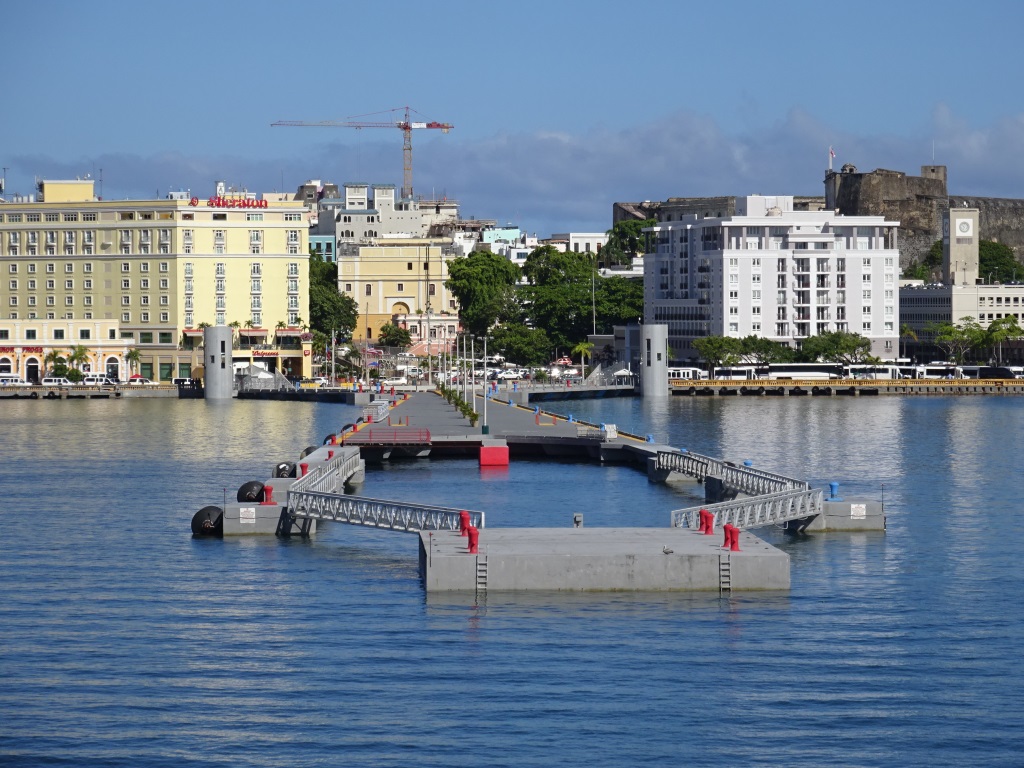 Pier 3 especially constructed for the Mega Liners. Originally it had some sort of art work and canopy in the middle, but that construction touched the overhanging lifeboats of those ships so it was removed

Tomorrow there are 4 cruise ships scheduled.  The small Sea Dream II I expect will go to Pier 1. The Celebrity Summit and the Vision of the Seas are both home porting at San Juan and they both dock at the Pan American Pier. They do not need to be in downtown as their traffic is mainly between the airport and the terminal.   And then there is us. Now being part of Carnival would mean that we would normally dock at Pier 4.  But the Staff Captain likes to do maintenance wherever the weather is good and for that we like a wide pier. So we will be docking at 3, where there is no terminal building on the pier. We also want to lower a tender on the lee side for my exams and thus we will dock on the West side of pier 3, nose in, for the tender exams to take place in the lee side of the Veendam as the Trade wind is blowing from the East and will hit the ship on the Starboard Side because we are docking nose in.

So there are a lot of things going on in the background, behind the scenes which the guests do not know about but also not notice as their vacation and port visits go on un-hindered while the ships management is making small adjustments towards, – how we go there – to make the ship run smoothly and continue to run smoothly.