Regular Caribbean Sea weather to day. Although we are in the North Atlantic Ocean, this area is fully under the influence of the Trade Winds, which also dictate the weather in the Caribbean Sea, so there is really no difference. They decided to name the Caribbean Sea, the Caribbean Sea because it is enclosed all the way around with Caribbean islands. Starting with Trinidad and going up all the way to the Western Tip of Cuba. I just wonder how history would have treated the area if Hispaniola (Haiti and the Dominican Republic) and Cuba would have been missing and there would have been a completely open area all the way up to Freeport? Would it have been the Greater Bahamian Sea or the Gulf of Jamaica? Who knows, the naming of locations do not always make sense. Columbus discovered the America’s but we have called the America’s after Amerigo Vespucci who came sometime later. (Although while Columbus thought he was also in India, Amerigo was the first who proved that North and South America where not part of Asia)

The whole geographical world is full of political decisions and the logic behind it is sometimes not logical at all because it is politics. When the British took over Nieuw Amsterdam, they renamed it New York. The Dutch were the enemy so they were not going to keep Nieuw Amsterdam but they were still inspired enough to keep the word New and opted for York. Both the Dutch and the British kept the native word for Manhattan while they could have renamed that as well.  Then the British just changed “Lange Eiland” to “Long Island” and Long Island is still there. 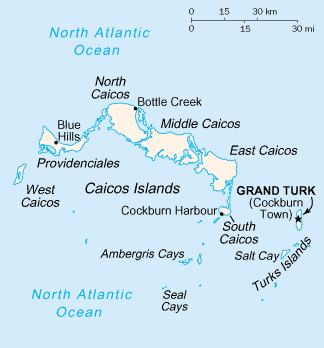 As we are now sailing in an area where the world powers of those days, the Dutch, the British, the Spanish and the Portuguese have been battling it out over hundreds of years, the naming of the islands and localities here have a confusing mixture of heritage as well. Tomorrow we will dock in Cockburn Town, on Grand Turk Island, which is part of the Turks and Caicos Islands. Looking at the back ground of just those two names gives sufficient information to fill a complete book. This area is made up of a smaller group of Islands, the Turks and a larger group of Islands, the Caicos. They form part of the Lucayan Archipelago which encompasses all the islands east of Florida and north of Hispaniola. Thus including the Bahamas and Great Inagua Island. (The Lucayans were the native peoples living here in the old days)

The name Turks comes from the name of a sort of cactus found on the island and Caicos originates from the Lucayan word for String of Islands.  Although Grand Turk with Cockburn Town as the capital is one of the smaller islands, compared to the Caicos, it was first settled due to its proximity to deep water and no reefs (only shallow spots) 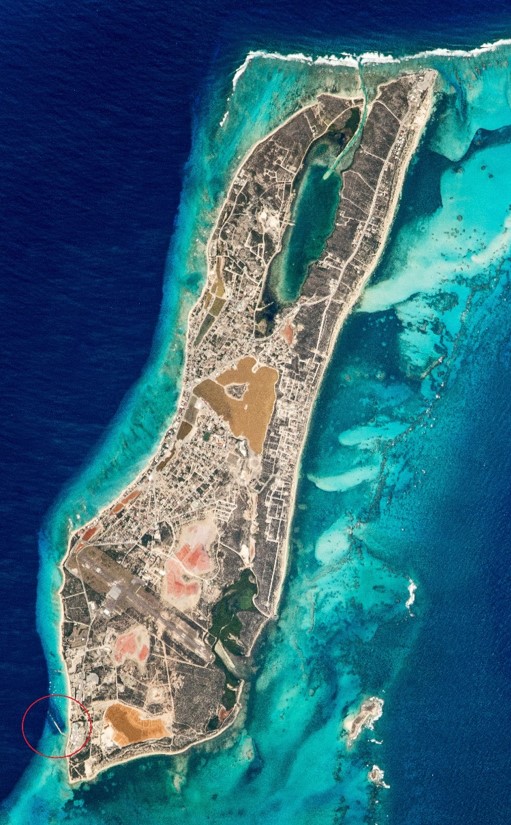 Grand Turk from space even our pier at the lower left is visible. (I googled this but I think the credits go to NASA)

Cruise ships used to come here already for a long time but had to anchor as there was no dock big enough to accommodate them due to the shallow reef around the island itself. So Cruise Company’s put Grand Turk only on the schedule if it was a longer cruise and, the possible, cancellation would not impact a cruise too much. Having to anchor meant (and still does) relying on calm weather or a gentle north to easterly breeze to have calm waters at the anchorage area. Too strong a Trade Wind and it would already be marginal and with winds from the North West, West, or South West, causing swell to roll in, it would mean an inevitably cancellation.

Our pier, which part of an intentionally constructed resort by the Carnival Corporation is just south of the capital Cockburn town. (There are shuttles and tours that bring you to this 18th. Town where little has changed since the 18th. Century) The town itself is named after Sir Francis Cockburn, then governor of the Bahamas in the early 1800s.It must have been nice in those days. Just change the name of an already existing town after yourself and you live on for posterity. Cockburn Town is the oldest permanent settlement in the country, having been initially settled by sea salt producers from Bermuda. (And that was before Sir. Francis Cockburn popped up) At the Caicos side there is also a Cockburn harbor but it is full of reefs, shallows and exposed to swell and wind  so not great for scheduled cruises. 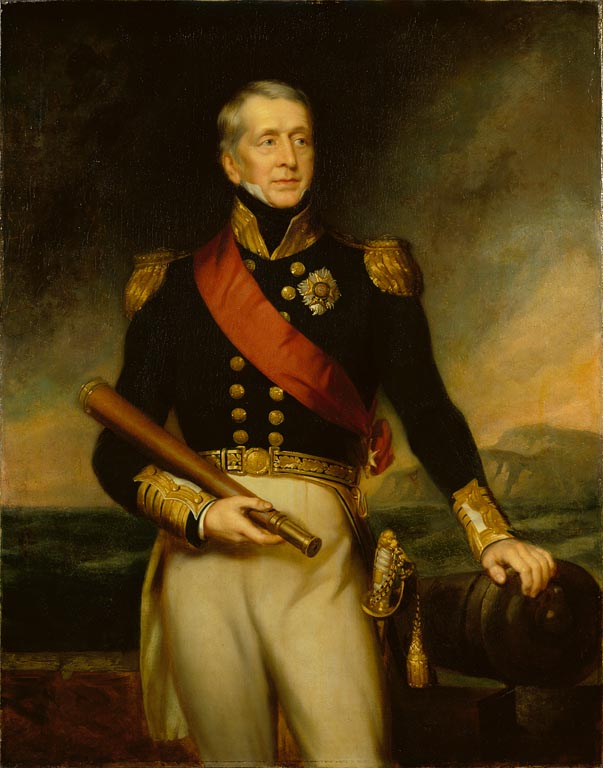 And this is the man: Sir Francis Cockburn Governor of the Bahamas from 1837 to 1844. (Courtesy Wikiwand.com)

We will be here by 0800 tomorrow morning and then the guests have the choice to explore colonial Caribbean England in Cockburn Town or enjoy the facilities of the Grand Turk Resort just off the ship.

Weather: Sunny, gentle breeze, 27oC / 81oF. and a 4% chance of rain. (I think the 4 % is there to make sure that the forecast is also right in case an unforecast cloud drifts in)

Caribbean, Cruises of the Past, Destinations, HAL History, ms Veendam