Today we are at sea, as we have to cover the long distance between Istanbul and Rhodes. After departure yesterday at 17.00 hrs. we sailed through the Sea of Marmara and then through the Dardanelles again between 02.00 and 05.00 hrs. Now we are in the Aegean Sea heading almost due south until we will clear the SW point of Turkey and then turn slightly more to the South East. All the islands which we pass, even almost on top of Turkey, are part of Greece. The North part of the Aegean Sea is quite open and land is far away but late this morning we came to the more southern part and here more and more islands are scattered around. These are called the Cyclades and it is in this area were Odysseus had a number of his adventures. 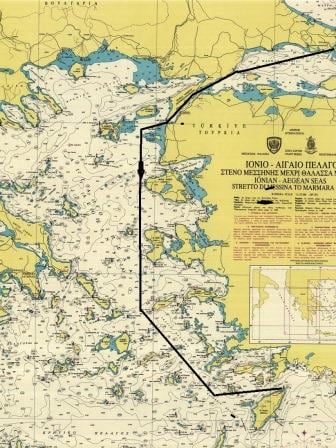 Our route from Istanbul through the Dardanelles and the Aegean Sea to Rhodes.

We have the Etesian wind blowing again, wind force 5 to 6 but as it is a northerly wind it is following us. With our ships speed the relative wind is about half and that gives a very pleasant day to day on the outside decks. One of those dangerous days when you do not feel the warmth of the sun, due to the cool wind, and suddenly you realize you have turned red as a lobster. 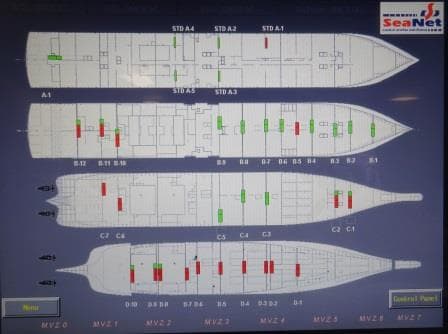 The Watertight door layout of the ship. Doors which do not have to be open for work are always closed. (Green) Doors were work is going on such as the Engine room or the aft store rooms are open. (Red). Red and Green indicates large doors, which we keep half closed so in case of an emergency they will close in the same time as the smaller doors.

I did not see much of it as I was busy all day teaching the Engineers a deeper understanding  why our watertight door system is laid out in the way it us. Corporation – Fleet – Wide there is now a requirement for everybody, who has to operate a watertight door, to receive training and to understand the larger picture and also understand why accidents and incidents still happen. Holland America has been lucky in that we never had any, or maybe not lucky but well trained, but other companies have had issues. And with a watertight door, an incident is quite often fatal. 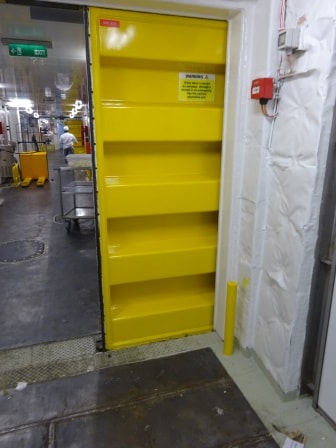 This is such a big/half open door in the Provision area. When in port the bridge will open the rest of the door and pallet jacks and big boxes can go through. At sea the half door still allows for quick passage by crew and quick closing if needed.

Apart from safe handling, the watertight doors are there to keep the ship afloat by stopping water going from one compartment to another.  If needed we can close everything quickly from the bridge but we try while sailing to keep most doors closed. Not always handy for the engineers and thus they have to open them as most doors are in the engine spaces in the depths of the ship.

We are going at at fairly low speed as this is one of those distances where you cannot do it in one night and if you would go full ahead we would arrive in Rhodes late evening when everybody is already in bed. Thus we trundle along with the sedate speed of 12 knots and give everybody the chance to recover from the hard work of being a tourist in Istanbul. Some guests really went for it and one couple came back with a complete Turkish carpet. As they live in Holland and will disembark there, it is not so difficult to take it home. I hope they have their paper work in order as Turkey is not in the E.C yet and Dutch Customs is really good in charging import duties and this size carpet you cannot hide in your suitcase. 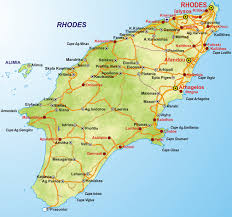 Rhodes town is located at the top of the island.

The city of Rhodes is located at the north point of the island and the original town located there was to support the local fortress which protects the island from attacks from the north. As it is also the closest distance to the Greek Mainland the ferry port is located here was well. Convenient for reducing the sailing time between the islands and the mainland but not so exciting for the sailor. This Etesian North wind blows straight in and tugboats here are quite often needed to keep the ships in position even if those ships are very powerful. It will be interesting to see what wind we will have tomorrow although the weather forecast predicts the winds will be less than today.