Thus we arrived this morning at Rhodes to witness a strange phenomenon; the wind was not from the North but from the South West and not much more than a Gentle Breeze. Although the harbor is of a decent size, the Koningsdam is close to being the biggest size it can handle and today it dominated the sky line of Rhodes. 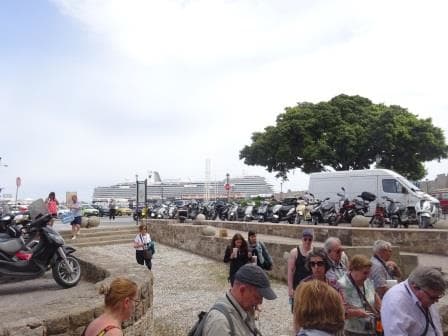 The Koningsdam docked against the outer wall of the old port.

No chance to get lost, just try to get to a place where you can look over the houses and you would see the ship. We were joined here by the Aegean Odyssey which we had also seen in Piraeus and which is a small Greek cruise ship that specializes in really in depth antiquity cruises. There then was the Golden Iris from Mano Cruises which is an Israel oriented company and that makes short cruises in the East Med. All were docked in what is called the old port; then further East is the new port where you can park quite a few more cruise ships. Between the city walls and the old port you then have the Fisherman’s port and the Visitor’s Marina. 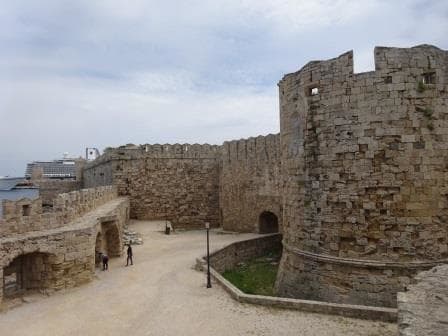 The Fortress of the port which is only a small part of all the fortifications and the City Walls.

Rhodes is a World Heritage site and it calls itself the City of the Knights. The Knights Templar had one of their major strong posts here. Another important one was Malta as both islands were strategic for controlling the Sea routes to the East Mediterannean and the Holy Land. As a result Rhodes still has some strong fortifications which draw a lot of tourism, apart from the beaches of course.  With the emphasis on the  words A LOT. I stepped ashore for a walkabout in the early afternoon after a whole morning of training and with the intention of hopping on the Big Yellow Bus, instead of the Big Red Bus which gives you hop on hop off for a whole day or an hours sightseeing tour for 12 euro’s. However there are more clever clogs than just me and when the bus stopped it was so full of “12 euro – tourists” that I gave up and walked into the town. 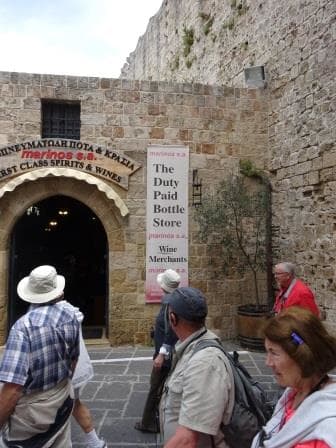 This appealed to my of  sense of humor. I am used to Duty Free shops. This is the first shop I see which calls itself a Duty included shop…… It is located in the City Walls, which might be appropriate as the Knights Templar where known to be good drinkers. In the Dutch language we still have the saying “as drunk as a Templar”.

The main (tourist) street in Rhodes runs from the main port gate towards the Fortress and then splits up a little bit at the square where most tavernas and restaurants are located. Every tourist marches up and down this main street and the funny thing is, there is a parallel street about 50 feet behind it, right under the city walls and nobody goes there. 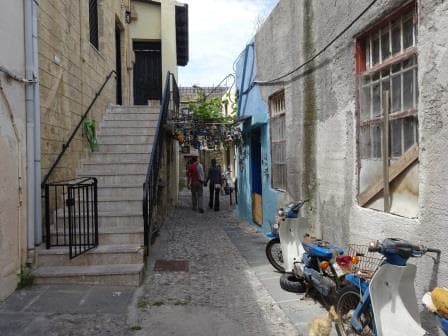 This is the back street of the main tourist street and only 30 feet away behind the rows of shops.

It is where the regular people still live and who by the noise were having lunch. So I went there and looked at the old architecture without having to look at “souvenirs – cheap price” signs.  I even found a book shop with 2nd hand books although nothing related to ocean shipping. The owner was still one of a dying breed of old book dealers, orginal, peculiar and cantankerous if you do not hit the right nerve with them. This one displayed the all the traits and only melted a bit after we decided on speaking in German, “because they always want me to speak English……what is wrong with French & Greek ??”.  Once we had agreed that the world was coming to an end because nobody spoke any other languages anymore, I found out he was related to a family who produces nautical books in Athens and which is a shop I like to visit when in Pireaus. Far away related but he was.  It is a small world sometimes. 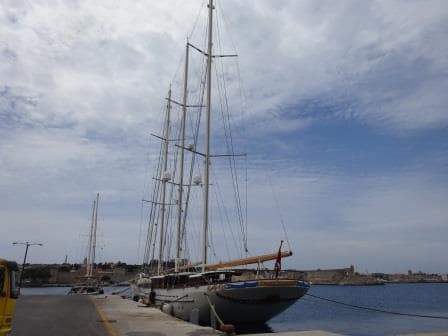 The sailing yacht the Mikhail S. Vorontsov. I would not be amazed if the cost price was close to a 100 million.

In port also a large sailing yacht, privately owned. It is for charter and sets you back about $ 260.000 dollars a week but it sleeps 12, so I suppose it is not so bad a price then. I do not know much about sailing yachts so I had to look this one up. It was built in Holland in 2013 and then laid up as the owner did not pay. In September 2015, the shipyard forced a court sale to recoup their costs but the day before the judge would decide, the matter was settled out of court. Now she lays in Rhodes, empty, and waiting for a charter, or the owner I suppose. All built from wood, including the hull and very beautiful to look at.

Tomorrow we are in Heraklion (Dutch spelling) or Iraklion (Greek spelling) and we are expecting a sunny day with temperatures of 58oF or 14oC.  Winds should around 10 knots and from the south and that is good because we are planning to send all the lifeboats down. And empty lifeboats tend to get blown away so the least wind the better.