Today we were in Iraklion and blessed with sunshine and not too much wind, which made the docking of the Koningsdam a pleasure. The captain wisely decided to swing around in the port while the “going was good” = very little wind, and thus to be able to sail straight out at departure. If there is no wind in the morning, it still tends to pick up later in the day, so why not prevent yourself from getting a headache. One other cruise ship was in port with us, the Celestial Olympia which we also saw in Kusadasi. Due to our size we were docked at the container pier but the port authority provided a free shuttle bus to the port entrance. From there it is still a distance to the town itself but there are all sorts of local transport available. The Olympia left at noon, it is making very shorts stops in all its ports of call, and this time the Koningsdam did not stay very long either as we pulled out at 15.00 hrs. It is quite a long way to our next port of call Naples which includes going again through the Straits of Messina. 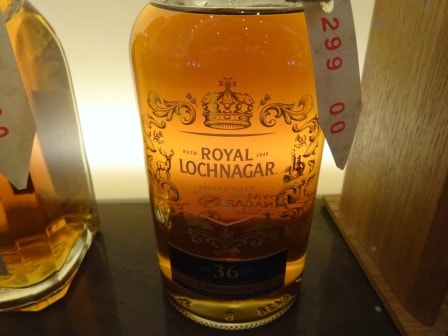 This must be heaven for a whisky drinker. Top of the Range but also for your Credit Card. I believe on 40 bottles exist, hence the price.

I still have a few loose ends to clear up here and there and as I have not much to tell about Iraklion in this case, we might as well do it now.  There was a question some time ago, what the most expensive Whisky was we sold in NOTES in the Music Walk. Well they just labeled all the bottles and now we know. The Whisky is called Royal Lochnagar 36 years old and sells for $ 299, — a shot. I leave it up to the connoisseurs among the readers to say if this is worth the price. Next best is The Glenrothes 1978 which goes for $ 109, — Cheapest one is a 12 year old Aberlour which sets you back $ 9,–. 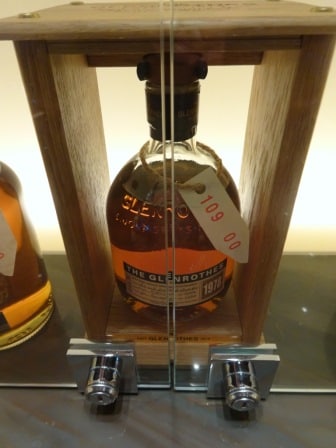 2nd best but with the added bonus of a wooden display box.

I might be tempted to buy one if we had a NOTES that sold ports but Whisky’s are lost on me. NOTES is working as the guests are buying and the Lochnagar did attract one customer a few days ago. The bestselling ones are in the region of $ 15 to $ 25 which are also the best known whiskies. But if you decide to buy one or more shots, there is a whole ritual, including a tablet, to steer you the right way and advice by the bar staff present during the sampling. 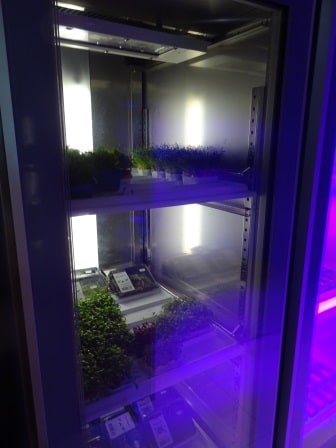 My dad was a gardener and he would have loved this. Working with plants and not having to go out when it rains.

Another loose end. Not yet ready when the ship sailed, the Herb Center in the Culinary Arts Centre. As part of the Farm to Table concept, the idea is for the Chef in the kitchen, to use our own cultivated herbs in the preparation. Due to lack of a vegetable garden, hard to do due to the salt air, we have an artificial one, it is a short of walk in with the emphasis on the right lighting. Herbs have now arrived and are being cultivated and are starting to grow. In due course the harvest will be used in the preparation of the meals. 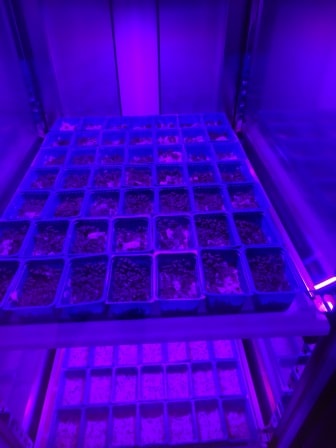 Nicely growing herbs in a variation of sorts.

From Crete we are basically travelling in a North Westerly direction sailing through the Ionian Sea which is the continuation of the Adriatic Sea and it is all part of the Mediterranean Sea. In this area we have the deepest part of the whole Med, the Calypso Deep which at last measurement went down for 5,267 meters or 17, 280 ft. which is a deep hole taking into consideration that the average depth of the Mediterranean Sea is 1500 meters. 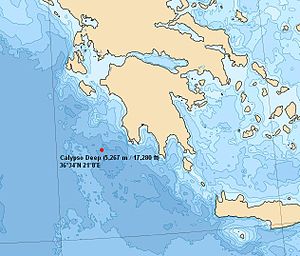 With a thank you to Wikipedia on line.

While sailing towards Messina we will be staying just south of this deepest part but that does not mean the rest is shallow. So the chance or running aground here is fairly remote, unless of course a new volcano is building up and that is not unlikely because the Calypso Deep has everything to do with it. The Calypso Deep is part of the Hellenic Trench where the African Plate slides under the Aegean Sea Plate. And were plates go down there is normally volcanic activity. (Just remember the explosion of Santorini). But Volcanos normally do not grow that fast and thus we will should be ok here.

Crossing the Aegean Sea tonight and all day tomorrow.

We are expecting to arrive for the transfer through Messina Strait around 21.00 hrs. tomorrow evening. The weather is holding for the remainder of the day but tomorrow it will be becoming more and more overcast with a chance of showers the closer we come to Sicily. And yes there should be about 20 knots of wind and we are going against it with 18 knots. Makes for a windy day on the bow with a combined wind force of 36 knots.