Today we have a quiet day at sea while we travel towards the Strait of Messina. We will go through in mid evening. Most of the day it has been sunny but very windy. At the moment there is a force 7 to 8 blowing from the west and we go force 4 against. Hurricane winds on the Bow. But as the wind is on the bow, it is easy enough to find a spot out of the wind somewhere further aft.  Although there is a lot of wind and the sea is quite boisterous the ship is riding very nicely which bodes well for the future in general and Trans-Atlantic crossings in particular.

For the whole day we are in the wide open area between Greece, Italy and Africa and there is not much traffic to be seen. Except what is there is roughly on the same track line as we are, as this route is the most direct route to Israel and the surrounding areas. Around 18.00 we will merge with the course we sailed going Eastbound in the beginning of our cruise and then we will follow the regular ”railroad” for approaching the Strait of Messina. Although the sea is wide and large, shipping mostly sticks to the same courses in the same part of the sea and thus it looks if we are all using the same railroad to go from A to B. 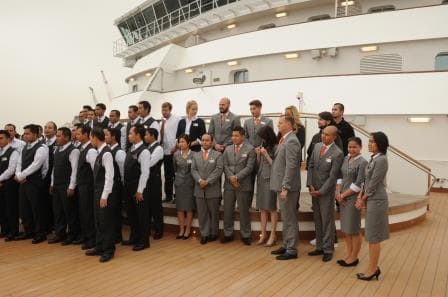 New Style uniforms. Bar stewards to the left. And a mixture of Front Office and Event Staff to the right.

I still have a few promises to fulfill and one of them is in regards to uniforms. The Koningsdam is the first ship where the new house style is being rolled out and this house style does not only apply to the company’s crew but also to the Concessionaires which until now had their own corporate style. We have of course a number of concessions on board, Photographers, Casino, Shops, Microsoft, Florist, and Port Shopping Ambassador etc. etc. The most obvious ones are the Shops on board who are now adhering to our new house style which shows different colors but all accentuated with orange. Orange is the national color of the Netherlands and thus a nice link to have on the uniforms. 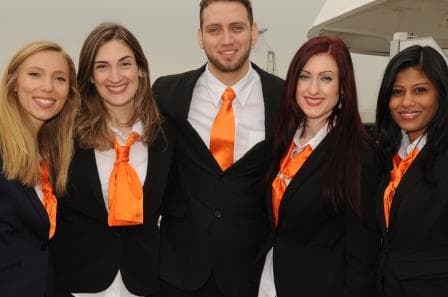 Some of the Shop Staff on board looking very spiffy with the Orange ties. 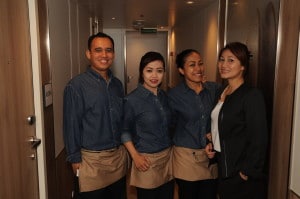 This the staff of the Culinary Arts Center.

With the Art on board I keep finding the odd piece in an area which there was not one before. Some art was only installed once the ship arrived in Civitavecchia and since then I have not been patrolling the decks to see what is /was going on. Thus I end my blog with a small piece which is located in the Starboard side of the Crows nest and I have to admit I have no idea what it is. Apart from the fact it is very nice. 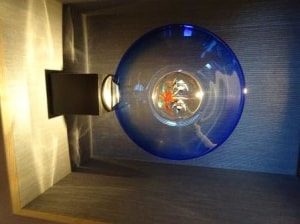 Something very beautiful in Glass graces the starboard entrance to the Crows nest.

Tomorrow we are in Naples where the weather is going to be a mixed bag. Partly cloudy, partly sunny and scattered showers with temperatures of 17oF or 63oF. On the schedule for a day visit is apart from us the Norwegian Epic.