It was a windy passage through the Straits of Messina last night but it had one great advantage, there was not a fishing boat to be seen. They were all happily tucked away at home. Although I really would not know if they had been out there anyway as it was a National Holiday yesterday in Italy. The country then has a tendency to come to a complete standstill. Not always easy for a ship which needs answers and arrangements from the shore side. Therefore, you have to keep an eye on those days and ensure all the required information is in, or out and received before “Italy closes the computer and stops reading emails”.

I needed information from Naples and the Captain was sending an email accordingly but of course we did not get any answer back….it was a holiday. I was planning to throw a fire drill with the option to really spray a lot of water with hose handling. Water, which would then drain away over the side back into the port. In principle, it should not be a problem as it is port water we pump up with the Fire pumps and thus it is only a sort of loop where the water comes from and where it goes back. Still you never know how the local authorities react when they see water coming out of a ship and thus we verify. When Italy returned from their long weekend we found out it was indeed not a problem.

Nevertheless, it can be. About 15 years ago, Turkey decided to clean up the Sea of Marmara and their part of the Bosporus. To really get this going they instigated a fine of $ 40,000 per water spillage from a ship and $ 5000 for any other environmental violation. (This included if your hat blew off and into the water)People who observed and reported got a commission and thus there were many people suddenly “supporting the environment” by keeping a close eye on the ships. Quite a few ships got caught and in the end the reporting became so irritating for false alarms that our ships did not even load any fresh water anymore until reason returned a little bit.

Still it helped. Last call Istanbul we had small dolphins escorting us in to the dock so things are improving there. The Sea of Marmara which was more or less dead now life slowly coming back. 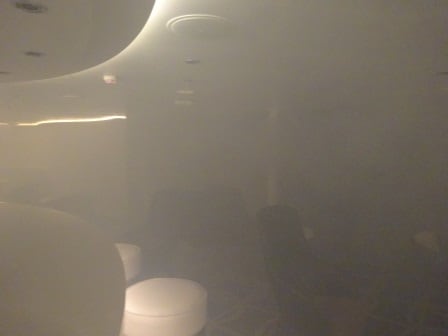 A foggy day in the Officers Bar. Stage Smoke in use to create an area on fire. By the time the teams entered visibility was zero.

This is my last day on the Koningsdam and I thought I would say farewell with a large fire drill. On the bow we have the bubble, the area under the Jacuzzi on the bow which you can see if you look at a photo of the Koningsdam. In that bubble is the Officers Bar, The Crew Training room, the Deck office, a Smokers lounge, toilets and a lot of small lockers and AC stations. A true maze. All of it is away from guest areas and thus one can create havoc to one’s hearts content. You can use real water outside when cooling down the superstructure and inside the maze everybody can mess about with hoses as much as it needed. So I put the smoke machine in, closed some doors, switched off the lights and let “nature run its course”. Four fire teams were needed to secure the area, stop the fire from re-occurring and find a casualty, which had collapsed in an escape. I saw some very good things and we learned some things which we will use for the next drill as a constant learning process for improvement. 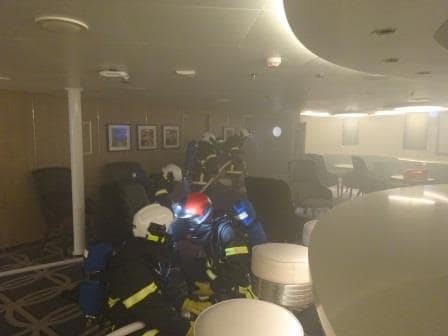 Staying low to wait for the smoke to clear. A smoke path was created after the source of the fire was found. In the back a second team is verifying if a locker is clear.

The Koningsdam will be in Civitavecchia tomorrow and will then start a West Mediterranean cruise, which returns one more time to Civitavecchia. Then it will be westbound ending up in Rotterdam for the christening by Queen Maxima.

I will be leaving the ship and fly home to focus on the maintenance of my apartment building. This year it is phase 2 of the roof maintenance so I will be up and down scaffolding. The plan is now to join the Eurodam on June 23th. as the company is planning another school class with new navigators. Afterwards everything is still open. Maybe to the Alaska ships, maybe another visit on the Koningsdam. As soon as my schedule finalizes, it will appear on the blog. 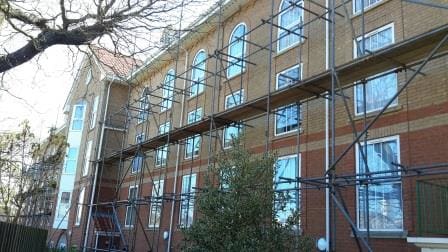 Scaffolding going up at home. this is the back of the northside of the building which is U shaped around a courtyard.

I would like to give a special thank you to all those blog readers who I met during the last few cruises. Thank you for your compliments, much appreciated. The Koningsdam is a beautiful ship and it was a pleasure to write about it. I will be back on the blog in about six weeks. Until then……..…;