We are on our way to Balboa for our evening call at Fuerte Amador. With 878 miles to cover, it will take two full days to do so. Hence our early afternoon departure from Puerto Quetzal and the 1800 arrival at the anchorage for our evening call. Luckily the weather is very good, nearly wind still weather all the way, and with the swell diminishing significantly so we should make good progress, on average. With the last I mean that there will be stretches with the current going with us and there will be stretches with the current against us. On average it should almost level out, except for the last morning and early afternoon when we get the current fully against us; courtesy of the fact that it enters the Gulf of Panama from the South East and then curves out again at the South west. With the nearly wind – still weather of the last few days, it will be interesting to see if the currents are stronger or weaker, now there is no “present” wind to influence them. 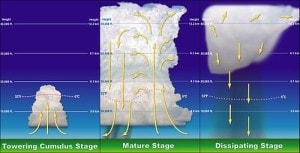 Although I reported yesterday that I did not see so much rain as I was expecting, there is still a lot of it, at least above the dense rain forest of Southern Guatemala, Costa Rica and Panama. The rain forest survives because of the rain and it’s steaming temperatures help to sustain a rainy cycle. As a result we see more rain ashore than at sea. Looking at it from a distance we can enjoy spectacular lightning and thunder shows when different clouds meet. These thunderstorms can also happen over sea but it is less prevalent as the sea is so large that the air temperature is normally regulated by the sea. Thunderstorms normally develop in an instable atmosphere where warm & cold, dry & wet air meets. This is all relative of course but the sea air is normally cooler and drier than the land air above the steamy jungle. Although the difference might only be a few degrees. The warm air comes up from the surface and because there is cooler air above, keeps increasing in flow speed and at a sudden moment, the difference in electrical charge is too much and bingo we have a fantastic display of lightning. Because of the presence of very warm air above the rain forest, you can have 200 days or more with Thunderstorms in the Tropics, while there are hardly any in polar areas. 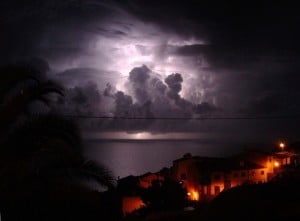 I am not a lightning expert but when looking at it, the flashes look different here in the tropics, than in the more moderate areas. There you have a real vertical flash that quite often hits the ground and on occasion causes damage and/or incinerates something. When sailing along the coast and in the Panama Canal it looks that a lot of the electricity is also displaced sideways into the cloud, lighting up the cloud as if it is a white sheet with a flashing light behind it. Still, whatever it is, it is really impressive to see.

Also I am not very afraid of it on the ship. It can hardly do harm to it. The ship is from metal, mainly steel, and acts as a Cage of Faraday. The electricity is led down to the water by the ship’s hull, not harming the people inside. The only damage I have ever seen to a ship were burnt radio antennas which were sticking out, when lightning hit the Radar Mast. The rest of the ship was untouched although the thunderclap was very loud and right after the flash, so we must have been sitting right there where the two systems met.

Tomorrow we will have another day at sea before we arrive at Fuerte Armador for our evening call. It will be another balmy day with most likely no wind at all. Sailing on flat seas and a surface that is only moving because of a long undulating swell from the South West. It is going to be very warm and it will feel very warm as there is no wind that brings cooler air towards the ship. There will only be the air circulation caused by the ships speed.

With a thank you to the unknown contributors to Wikipedia, as I pinched the pictures from there.