This is our 2nd day at sea, which will last until 1800 when we will be at anchor at Fuerte Amador for the evening. The weather chart is showing no rain, so I hope mother nature will act accordingly as it would spoil a nice evening ashore if you come back drenched. Because if it rains here, being in the proximity of the rain forests, it pours. Sometimes the down poor is so heavy that it impairs the visibility. I went once through with the Rotterdam V, when we ended up in such a heavy shower that the pilot had to abort the approach to the Gatun locks (the locks on the Atlantic side) because he could not see anything anymore. Also our radars were of little help and we let the ship drift slowly towards the anchorage area while waiting for the rain to lift. Normally you talk about the very low clouds “to lift” but in this case we needed the rain to “lift” as the result in reduced visibility was exactly the same. It also made so much noise that we had to raise our voices to be heard over the din. Luckily we had a few captains in the old days who were always raising their voice so that it did not make that much difference. Things have improved considerably since then. Although………. I tend to sing on the bridge, so I do not know what the OOW would find worse.

Today it was “calm of wind” not a ripple on the waves. If there had not been a low running swell from the south West, the sea would have been as flat as a sheltered lake. It is seldom that you see the ocean like this. We are now coming onto the routes of other ships coming and going from and to the canal. And as we are all looking for the most economical route to sail, we are all on the same or nearly same track line. As we go faster than most of the other ships, the navigators were weaving in and out of traffic as if driving on a Freeway. With 18 knots you do not get overtaken that often, we overtake; the only exception are fast the containers ships that do between 22 and 26 knots, they sometimes come racing by but we seldom see them on this coastal route. They go directly Trans Pacific after leaving the canal and that is an almost straight westerly course while we are coming from the North. If they are approaching the Canal, coming from the Far East they are normally on the East side of the Gulf of Panama , while we are heading towards the Canal from the West side. It only can become a headache when we all try to arrive at the same time at the anchorage. 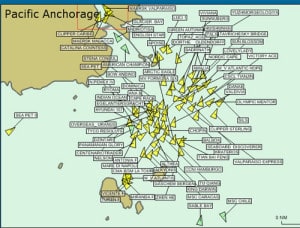 A little charlet showing a AIS shot of the anchorages with all the ships labled. The green markers are in the entrance to the Canal and that also divides the two anchorages.

The anchorage of Canal is divided in two parts. The hazardous site; where the tankers anchor and those ships that want to refuel; those are on the west of the canal entrance. The normal side; those ships that are just waiting, those are to the right of the entrance. These anchorage areas are marked by yellow buoys at the corners and in each area you can anchor about 25 big ships. Around those two areas’ there is plenty of space to anchor as well but it is not controlled by the PCA (Panama Canal authority). When you need to pick up the pilot for the transit, you either have to be at anchor in these two anchorage area’s or you have to proceed there, as the pilot will not board outside these two area’s as they are not under control of the PCA. We will anchor at Amador, which is outside the PCA anchorage area, so we will have to heave anchor timely and proceed to a spot where the pilot is allowed to board. As a result most ships will try to anchor inside the assigned areas as it saves them time in picking up the pilot when their transit time comes near.

This is all somewhat controlled by Flamingo Signal Station who regulates the traffic going into the canal and ensures that the ships get into the convoy in the right order. They sometimes assign you an anchorage location but often they tell you” Captain, just find a safe spot and let us know where you are” As each captain has different ideas about a safe spot, depending on his/her sort of ship or his/her take on the weather, it can be very interesting when you arrive with several ships at the anchorage at the same time. We do not have that issue as we anchor off Amador, where no other ships go as it is too far out of the way.

Tomorrow we will start our transit at 0600 in the morning by picking up the pilot. That is later than last time but at the moment it is very busy at the Canal and they are trying to get the containerships and us through without delay, so they changed the pecking order slightly.