Late yesterday the schedule arrived and I was not a happy person. Due to congestion in the Canal, the convoy was made up of all big – panamax -boys; we were selected to be number 23. Nearly the end of the day convoy and putting our pilot boarding time back to 06:00. Resulting in a planned sail by time of Cristobal at 17:00 hrs. During our last few Northbound transits we had a fast crossing which helps with making a timely schedule to Cartagena. I asked to be bumped up a few numbers but it was not possible. Then during the night we were advised that the pilot was coming another 30 minutes later and that was going to put the transit time even later. Good for my sleep but it meant that we would be doing the whole Canal in the burning sun. At least certainly until the Continental Divide. By being a bit early you pass under the Bridge of the America’s during dawn, which is a very picturesque sight and by sunrise you are in the first locks. By the time it is getting warm you are through the Pedro Miguel locks and then you can sit in the shade or behind the windows in the cool air while we go through the lake. Not today. In the end the pilot showed up another 20 minutes later and that did not help very much either. 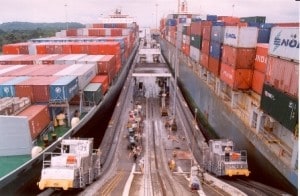 The big boys being pushed through. The best client of the canal is the container company Maersk with on average 5 ships a day making a transit.

The Panama Canal Authority is not always concerned with the preferences of 1200 tourists on a ship but more with getting 50.000 containers and 20.000 cars through the canal, so we just had to deal with it the best way possible. At least there is always something to be seen. The view was dominated by 3 bulk carriers carrying a complete windmill park. We went through with the one that carried the generator, the distribution plant and the centre knob of each windmill. Two other ships, still at anchor, were carrying the masts and the foundation. As they were only carrying deck cargo, they were laying very high on the water, so when sailing they must have been rolling alarmingly. Bulkcarriers do not have stabilizers to keep the crew happy, so you basically roll across the ocean from port to port. (And the ship itself from port to starboard of course)

The weather remained hot and sunny until we were passed Gamboa and then it started to cloud over. Dark clouds were gathering over the Gatun Lake and by the time we were approaching the last locks, it was raining cats and dogs. We got the wind first and that was good as it meant that by the time we entered the locks it was just going down to a trickle, most of the shower having passed over. Lucky in a way. Then came the next surprise. A tug and tow blocking the way and given preference to go into the locks. So we had to wait and drifted for another 20 minutes. The tug and barge Ocean Ranger from Seattle & Juneau, so American flag, were on the way to Cuba. Based on the blockade still in place by the US government that was of course not possible, so the solution was that they must have been going to Guantanamo Bay. Nice to look at but another delay. In the end we parked ourselves against the centre wall and waited for the locks to be available. It gave the guests something to look at, while we were waiting. In the meantime our lady narrator kept everybody on board appraised of what was going on and what was to be seen and nobody had to be left in the dark about the why.

In the end we cleared Cristobal by 17:45 and put the pedal to the metal. If the Gods are smiling I should make Cartagena pilot station by tomorrow 08:30 and be docked by 09:45. The weather for the first part of our crossing of the Columbia basin is going to be horrible with strong winds and rain from the North. Then during the early morning it should abate, and then we should have a good day in Cartagena. I hope that the wind will die down in the early morning hours as it is a northerly wind, and that is fully on the beam when we go through the narrow channel at Boca Chica. Not a pleasant when you are drifting considerably. We will see; we have one Panama Canal to go, Southbound, and next cruise that will be a regular crossing starting at 05:00 as we have to catch the convoy southbound. Alaska is waiting.