Another dry and sunny day in Puerto Vallarta and we are still happy alongside the dock. Looking ashore it does not look that the town is overly concerned about what is going on in the rest of the world as there are no cases here, nor any in the direct area. There is some reduction in traffic which has mostly to do I think with the slowdown in Holiday Makers in the area. With the USA in lockdown, people on vacation go home but no new people are coming out. But life goes on while we all keep adapting to the changing circumstances. Change will continue as everybody is in the process of fine tuning with what they can do. It is a bit as if we re-inventing the wheel. Once the realization is there that there is a wheel, then the first version is square, then it becomes round, then somebody puts hard rubber around it, then the air tire comes along and slowly buts steadily the perfect wheel emerges and is put in use. To stay with this metaphor I think we are just in the phase from the square wheel to the round wheel.

But we have action as well here with the ms Rotterdam. Tonight we will go to sea for a night, so the chief engineer can run his engines on full speed (think soot clogging in the funnel, which is extremely dangerous as it can cause a funnel fire), we can process oily bilge water, back to clean water (machinery is only allowed to run at sea with speeds of over six knots) and we can discharge grey water (this is shower and kitchen water which is not harmful for the environment) Puerto Vallarta has only limited facilities to deal with this, as it is not a change over port, but a port of call. Then tomorrow morning we will come back to the dock, unless Mexico would decide to go in complete lockdown overnight for the whole country. As mentioned before, this area does not have any problems so it is better for the economy to keep going for as long as it can, and maybe it will not be affected at all.

More ships are coming this way now; we have heard about the Norwegian Joy of NCL which according to Marine Traffic will arrive here tomorrow afternoon by 16.00 hrs. and the Europa of Hapag Lloyd which is scheduled for 20.00 hrs. Tomorrow night. Then the port will be full with three ships. (A very big one, a medium size and a small cruise ship altogether in port) If Mexico does go in lockdown then we will all be at the anchorage and then the company’s will discuss with the authorities the best way forward. 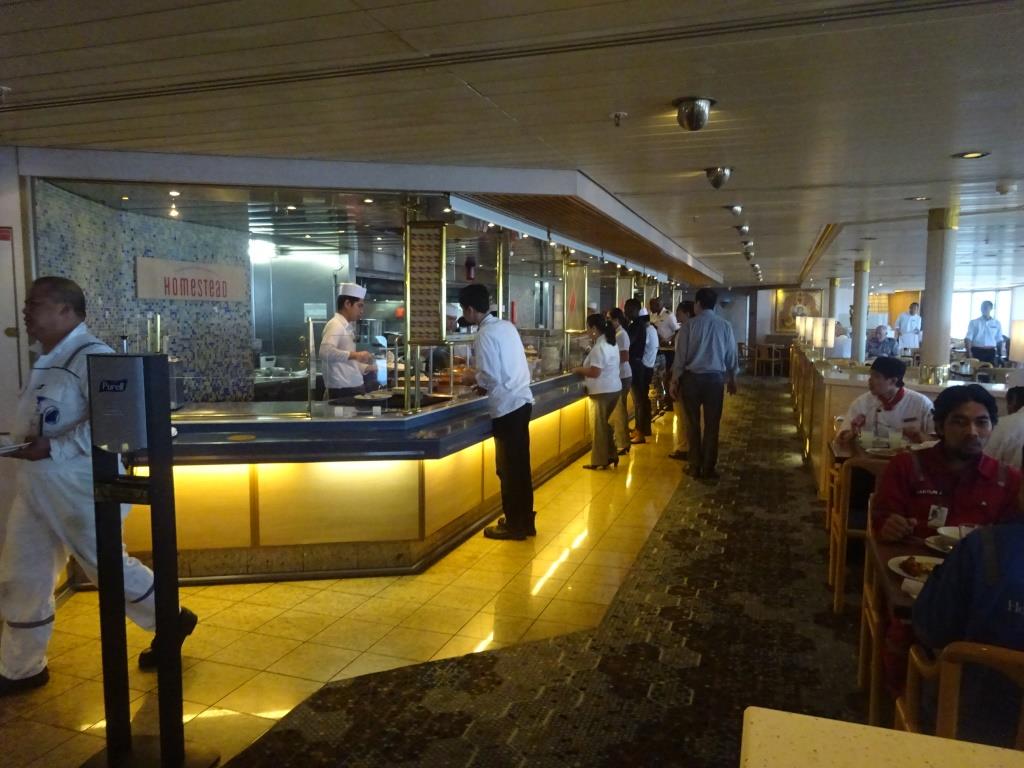 The Lido in full swing at lunch time. Both sides open to accommodate 600 crew in 2 hours.

On board feeding arrangements have been adapted as well. Normally the Officers and staff eat in the Lido with the guests, the crew has the crew mess room and the Petty Officers the P.O mess room. As we are now not operational, it makes sense to combine the various outlets and it was decided to make the Lido Restaurant the venue of choice. It has two sides and one side is for those in (clean) coveralls and the other side for those in uniforms or civvies. Also open today was the Dive In and thus a long, long line of Dining room stewards could be observed waiting for a Hot Dog. I did not know that hot dogs were so popular in Indonesia, but obviously they are. Apart from the Indonesian and Filipino food cycle (which is regulated in agreement with the respective labor unions) we also had the Spaghetti station open, the salad bar and the ice cream bar. Plus the Pizza place on the aft Sea View deck. Next to it is the Sea View bar which is also open so everybody can have a drink under the stars. (With “happy hour” crew prices) Tonight this will also be the venue for the crew bingo. 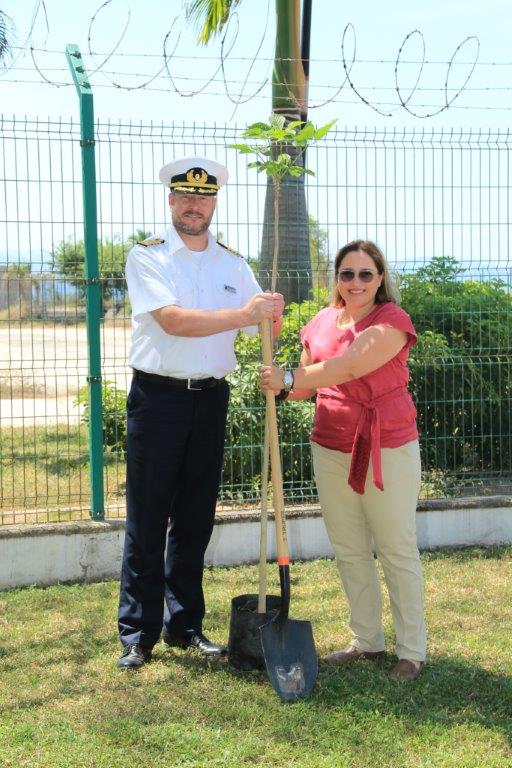 The local authorities have been very good in helping us out, with what we need to keep the ship going and that is not what they are used to during a normal day call. As a thank you and a reminder to the strange times we have been thrown in, the Captain offered a tree, sapling, to the port and which was duly planted in the port area. With a bit of luck the small tree will grow to be a big tree and will thus immortalize our visit and our gratefulness for the support of the people of Puerto Vallarta. Captain Bas van Dreumel who presented the tree  quoted: ” There is a proverb which says “Anyone who plants a tree knowing that he will never sit in its shade has at least begun to grasp the meaning of life.”  So maybe generations to come will be able to sit under the tree.

As there is only so much cleaning that can be done by 600 crew, everybody is now branching out to other activities as well. Thus Housekeeping staff have now been promoted to auxiliary sailors and have started to paint their steward stations. One of the stewards managed to paint himself more than the bulkheads but he made promise me not to publish the photo…………. Because his wife is reading the blog everyday………………….

Tomorrow should be another nice day, and if it all works out, the captain is planning to dock the ship again alongside by 09.00 hrs.  for the coming days.