This morning we returned to Puerto Vallarta after the Chief Engineer did all the things he had to do during the night and we were docked again by 09.00 hrs. We will now stay alongside until “further notice” as they call it. The Europa arrived this morning and the Norwegian Joy is still on the schedule for sometime late this afternoon.. We are now also expecting the Eurodam and the Westerdam but when is not certain yet as the Eurodam is approaching at slow speed, I think they are travelling on one pod and the Westerdam is still far away. The Oosterdam is still at anchor at Cabo San Lucas. (Have a look at this website, https://www.cruisemapper.com/, it gives the locations of all the cruise ships. Our thoughts are at the moment with the Maasdam and the Zaandam as they have challenges with landing their guests as most countries are now in lock down and are only letting their own citizens back in. And thus the office is now hard at work to find for these ships a port where the guests can still reach an airport for their final repatriation.

As we are living communities with wise moments but also with gossip and rumors it is amazing to hear where the crew thinks that we are going, sometime in the future. I am not going to repeat these rumors but by now we already could make a world cruise out of it. Maybe an idea for marketing in the far future: “A could have been cruise”? But all crew is kept up to date with multiple announcements by the captain and thus everybody knows, what he knows, which is not that much as the situation keeps developing. For the announcements the funny thing is that we now have roughly the same sequence as with normal cruising; the “Voice from the Bridge” with the wise words of the captain, followed by the Cruise and Travel Director with the latest news about the Bingo and the rest. That is now also happening here and thus after this morning’s Captains announcement there was Tia our T&C Director with the latest movie announcement. Tonight we have “Knives” in the World Stage. 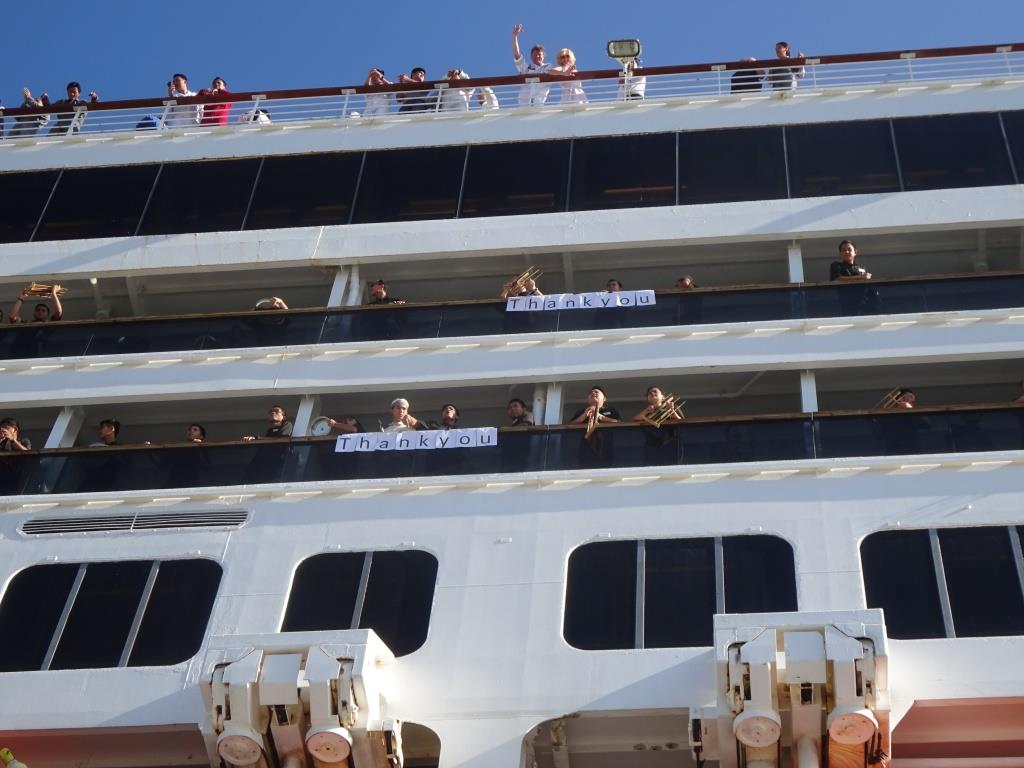 Thank you to all out there who battle the Covid-19 virus and those who try to make the world as livable as possible.

What we also did this morning was to give our “Rotterdam thank you” to those in the medical world who are battling the Covid-19 while we are safely – Covid free – sitting on a cruise ship in the sunshine. So at 09.15 all the crew came out on deck, for a rousing applause and that was taped on Video. The intention is to share this via social media outlets, with those out there who are in the hospitals and other hot spots facing a challenge that nobody was prepared for. 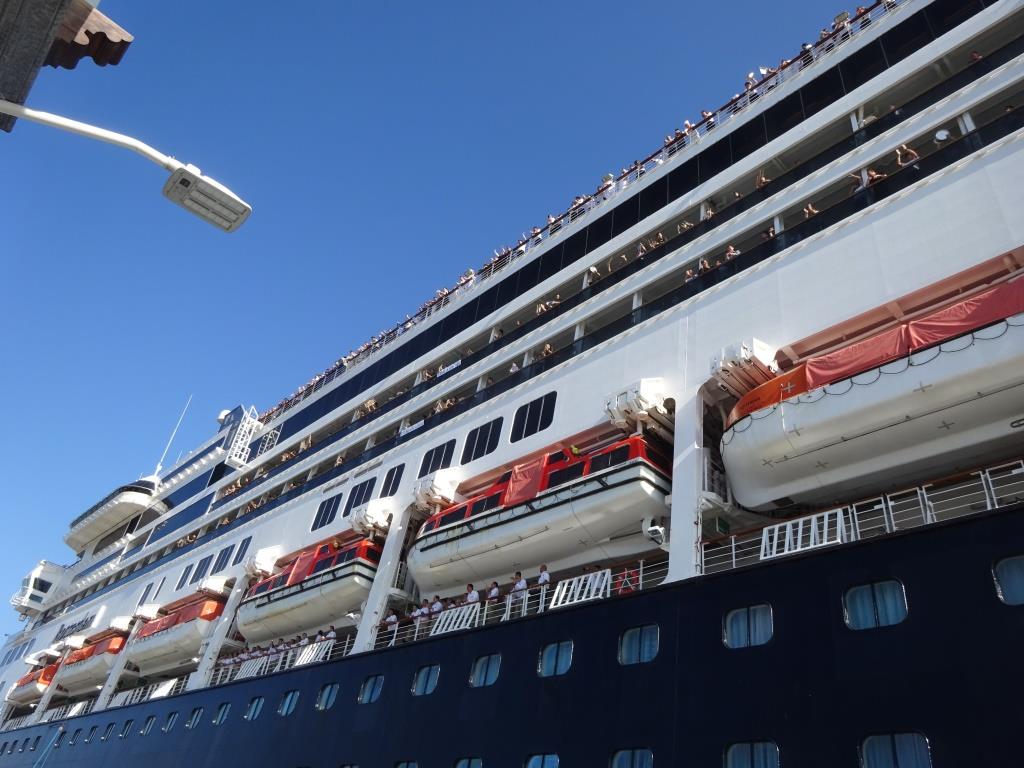 All the crew lined up at the railings and balconies. At exactly 09.15 a rousing cheer rolled over downtown Puerto Vallarta when 500+ crew cheered and made as much noise as possible.

In the meantime, the captain has made a further announcement with regards to our near time future here. The Europa came in with a nearly full house of Germans who were early this morning transported to the airport, where (correct me if I am wrong) a charter plane took them back. The Norwegian Joy is also coming in with a full complement of guests and crew and arrangements will be made to get these guests home as well. Everybody is deeply in debt to the local authorities and the local population who realize that if the ships are Corona virus free, then there is not much reason to stop them from coming in and not to help them in the most humanitarian way possible.  Still the authorities are getting concerned about 3 ships in port with a full crew on board, and more ships with crew in the distance. Thus by tomorrow morning crew leave for us will cease until further notice. My educated guess is that the authorities will want to review how the situation is developing before they amend this policy again.  No doubt the crew who was scheduled for shore leave today, will be bombarded with last minute shopping lists, from those on ships duty. 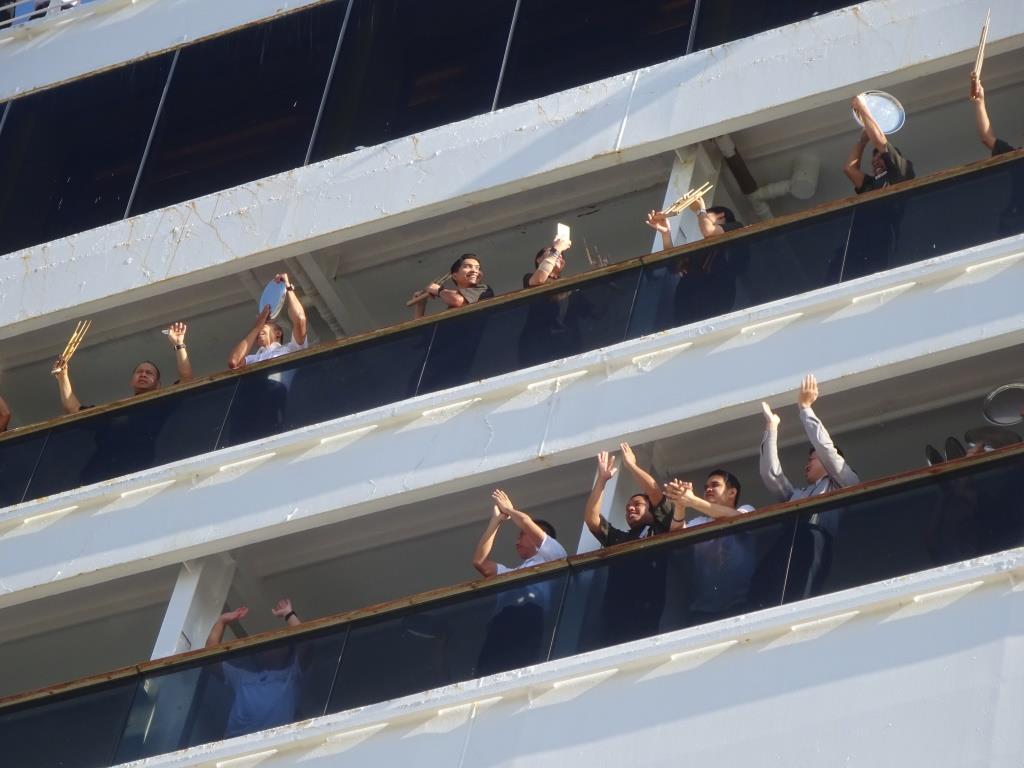 Some crew had even brought out the bamboo “Anklung” instruments from the Indonesian Crew Show.

Another thing that has just been added to the equation is the idea which was floated on the news to make the obsolete Carnival Corporation Cruise ships available as auxiliary hospitals. Not for housing Covid-19 patients but for providing accommodation for those currently in hospital and so freeing up bed space for the most urgent virus cases. Nothing has developed in regards to this idea yet and thus we are waiting to see if this will happen and even if this would happen, if it would involve the ms Rotterdam. All will be revealed in the future, if there is anything to reveal.

Here on board we keep working on deep cleaning, in depth maintenance, trainings and skills work and going for a final visit to Walmart (which now has to compete with a super market behind it, as the crew has found out that chips, crisps and nibbles are a little bit cheaper there)

So we should be alongside for a few days and it will become clearer then how it is going work with multiple ships.

Weather continues to be perfect. 83oF / 28oC sunny and a gentle breeze. The Bo ‘sun is a very happy camper as the short term forecast predicts 0% of rain so his team of sailors is out in full swing on the outside decks.