Another day in Paradise (?) as we are still happily alongside in Puerto Vallarta. The sun is shining again but it is not Hot, Hot; just warm, and the sailors working outside are really happy. Good weather for painting.  Everybody is now getting into the groove of giving the ship a good shine and everything I touch has just been cleaned or is about to be cleaned. I have been nearly run over by two vacuum cleaners (normal hazard for a HAL ship) but as there are no guests on board the vacuum pilots (GPA Housekeeping) are a bit more exuberant in their swings and moves than normal. I did get a full blast of shampoo spray as Housekeeping is tackling the carpets on Deck 5 today (Casino, Mix and Hudson room) No problems with that, but a shot of this stuff turns my brown shoes white and thus I had to run and find tissue paper.  The engineers have started on their drain and pipe project and thus caused a panic with housekeeping as they switched the water off. And without water no cleaning.

Bars are in full swing with counting and so are the shops. I think some bean keepers tucked away in offices far away are grabbing the chance to get a better insight in the inventories that are floating around now there is the unprecedented situation that a complete fleet will be out of service for a while; so a complete 100% correct count can be achieved now.  Sailors are painting the outside hull on both sides as they have lowered a tender on the sea side and I have also sailors on my balcony sanding and polishing the wooden railings. Holland America loves wooden railings and so do our guests but they are hard to maintain as the sun and salt is not very nice to varnish. The Cruise staff has been putting together an entertainment package and that is kicking off tonight with a movie in the World Stage. My sailors on the balcony say it will depend if there is popcorn there or not, on whether they will go or not. One has to keep its priorities right. 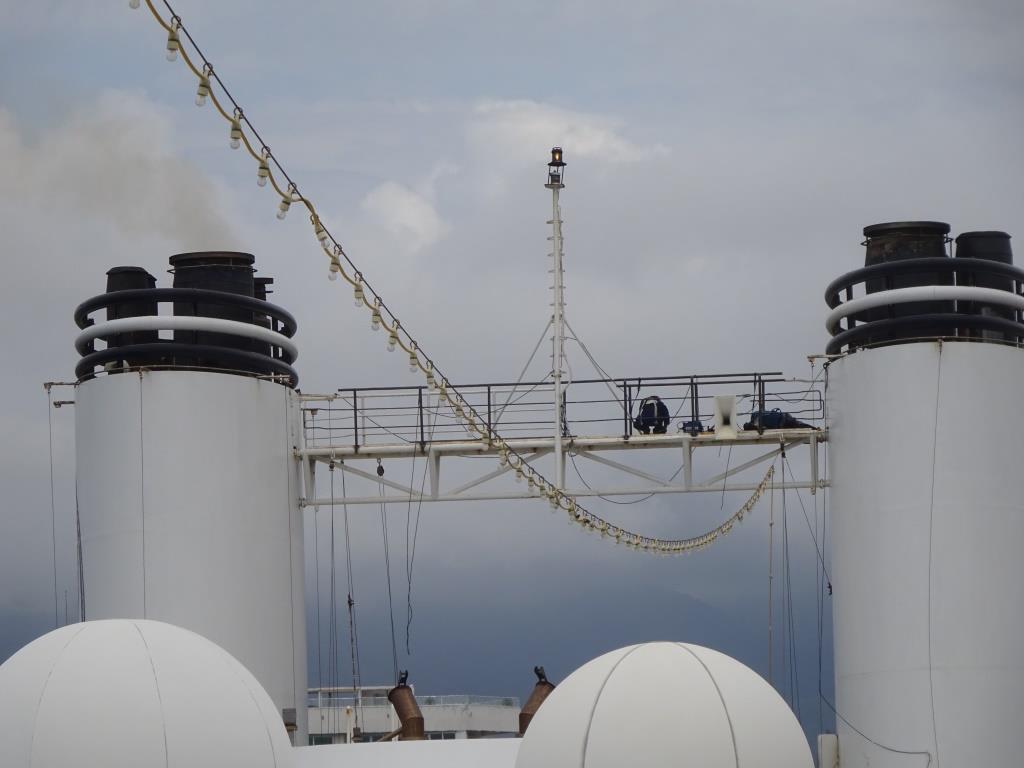 More work going on. Welders renewing the cat walk between the funnels. Work that can only be done when either all the engines are switched off, or the wind is blowing from a constant direction, as happens in port. At the moment the gentle breeze that we have is blowing the smoke away from the ship and thus it is safe to carry out the welding.

I do not know who in worldwide cruise management reads my blog, but I think some mover or shaker does as rumors are now going around that approx. 10 cruise ships are heading towards the Puerto Vallarta area to go in lay up here. No doubt they also want a happy lay up and will then need our dock as well so a relay system will have to be set up that we all can rotate alongside for loading water and for some R&R.  The coming days will tell. Apart from the Oosterdam being at anchor at Cabo San Lucas and the Westerdam (at the moment) heading towards San Diego I have not heard or seen any news. (This last information I get like everybody else from MarineTraffic.com) which tracks all the ships in the world over 300 tons (as they then have to have a AIS transponder, which can be monitored by everybody)

A screen shot from Marine Traffic with the location of the Oosterdam.  https://www.marinetraffic.com/en/ais/index/search/all?keyword=oosterdam

As mentioned yesterday we had our drill, and apart from setting the engine room ablaze, there is the 2nd part of taking the groups through their paces who are responsible for ensuring that all guests and crew will arrive at their lifeboat and life raft stations, with a 100% count. As we are dealing with humans, there will always be one (most of the time two, three , four……….) who do not do as they are told, or do not listen or get confused and then we have teams to find and collect them and deposit them at their correct muster station. That needs to be trained and for that I use the cadets. We have currently 3 Dutch and 1 British cadet on board and for them it is a good learning experience as they can now observe the way other cultures go through their decision making process to come to the same decision as the Caucasian world they are used to. For the crew it is exciting as they now have to deal with a live human being who is, wounded, obnoxious, confused, in shock, or whatever role the cadet will play.

So yesterday I had one who had locked himself into a handicapped toilet, one with a broken leg in a crew staircase, one grumpy guest in the World Stage and one little boy who lost his mammy. (Played with great talent by our youngest cadet) Once the lifeboat assembly alarm has been rung, all these teams swarm out to check the whole ship and then they find these guests. Question is then, what do they do? Nothing, freewheel, or follow the protocol for which they have trained? Our four heroes were quickly found and did end up at the correct life raft station. Next week with the next drill, I will do something else again, so the teams keep being challenged and interested. 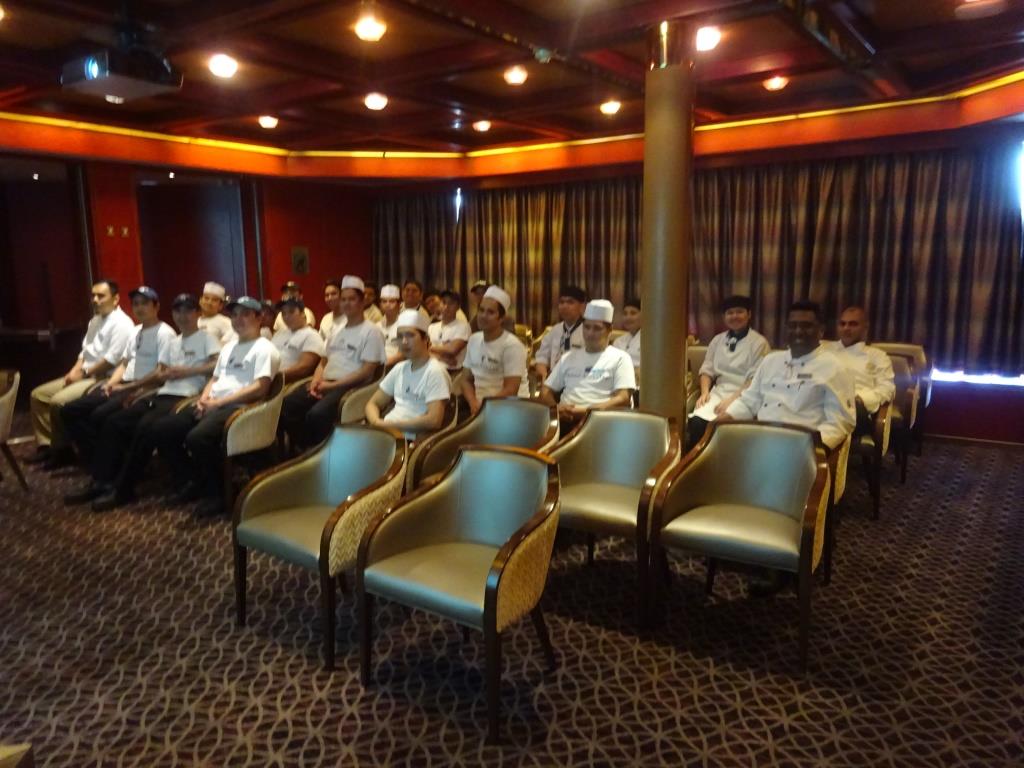 These are the Blue Boys. We can them like that, as they wear blue pants. In normal life they run the dishwashers in the various Galley’s on board.  In emergency situations they are the “crew sweep team” And then it is their job  to “sweep” all the crew area for stragglers or wounded and get them out on time. They got a refresher session this morning on how to handle crew in emergency situations.

This Captain announced this morning that we will be here for the coming days and thus we are keeping an eye on the traffic movements to see what other ships are coming this way.  Tomorrow should be a completely cloudless day and temperatures should rise to 28oC /82oF.