It took most of the night to get out of the frontal system but by this morning we had a blue sky and a sunny sky. Sun taking over from the miserable grey day on departure.  And a very breezy departure it was as the middle of the frontal system was just laying over Port Everglades when it was time for the cruise ships to sail.  The Veendam used two tugboats as the wind went well over the 26 knots that she can handle on the thrusters but also because she was docked nose in and thus had to swing around in the basin and that would have made it all very marginal. The Koningsdam has much more power and she did not have to turn. Only had to make a 90o turn to starboard. Plus she had the advantage that if the wind would get too strong then it would always be possible to make a soft landing against pier 24/23. So we sailed without tugboats and even with the wind breezing up to 35 knots on occasion the captain could easily hold the ship in the middle of the fairway. 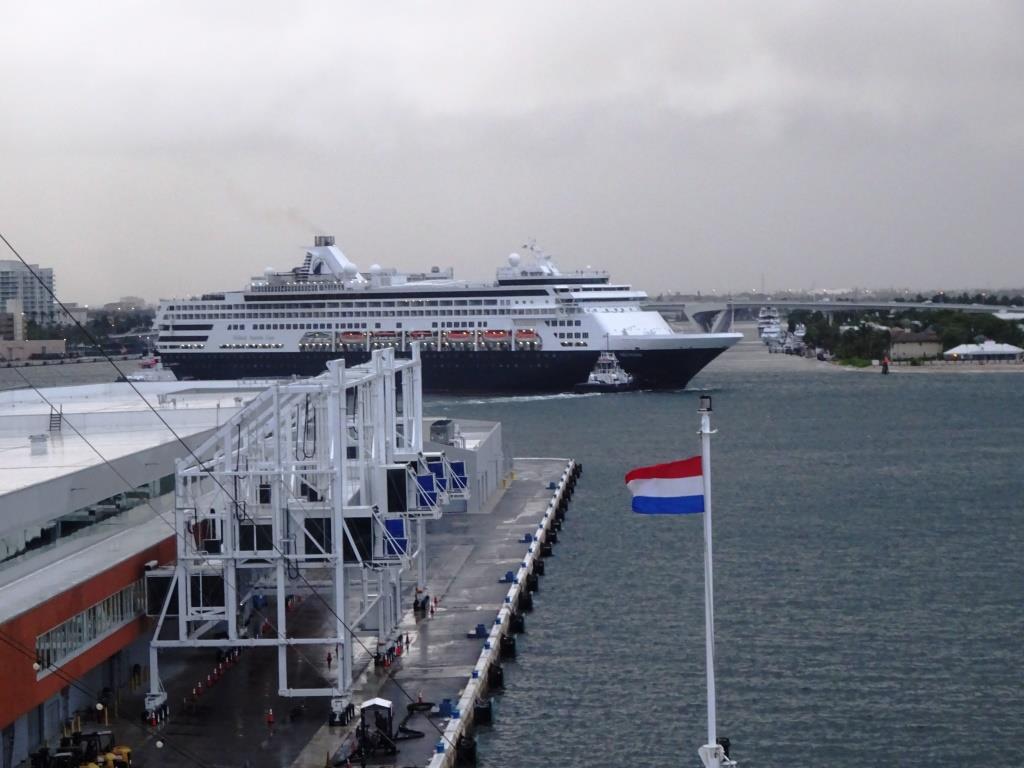 The ms Veendam swinging around in the turning basin. A tug at the bow to help the thrusters and tug in the stern to act as pivot point. What normally then happens is that the Captain and Pilot use only tugboat power to swing around and keep the ships power in reserve in case things get tricky. The tugboats in Ft. Lauderdale (they are called docking modules) are extremely powerful, so if you have to pay for them, you might as well use them as much as possible.

40 minutes later and the pilot was gone and we were on our way. To go to the East Caribbean there are two options / routes. Go north of the Bahamas or go South of the Bahamas. Going south offers more shelter but is a longer route, going north is shorter but is more exposed to the North Atlantic swell. Thus the captain had to make a decision about: maybe a more uncomfortable ride but a better chance of arriving on time, or a more comfortable ride and maybe not arriving on time.  Our schedule for St. Maarten is a full sea speed schedule so there is not too much lee way in the speed to make up for lost time caused by adverse winds and/or currents.

This time the decision was quite easy. For the first evening the ship would move whatever direction we would go as the weather front was laying all over the Florida Straits. But going north would provide shelter earlier in the evening while the guests where still up and about. Vote 1 in favor.  Then we go the shorter route Vote 2 in favor.  When coming out of the Bahamas there would be some swell (that is what we saw developing on the 12th, on the chart) and thus the ship could move a bit. Vote 1 not in favor. But we have stabilizers, negative vote neutralized.  So we could go the short way. When would the captain have opted for the longer route above Cuba???; if and when there would have been a storm blowing, then sailing through Old Bahama Channel would have spared the ship heavy movements. 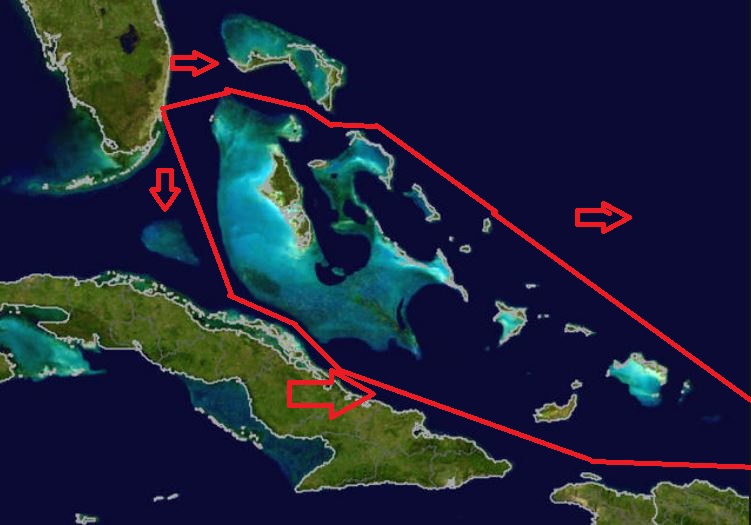 The two options to take. Until they will dig a channel through the Great Bahama Bank, captains will have to make a choice of which way to go.

And indeed this morning the weather was really nice. There was still a long and low swell running but the stabilizers could handle most of it. Normally stabilizers take care of 90% of any swell hitting the ships abeam but it becomes more of a challenge when the swell hits the ship on the ps. Quarter E.G not at 90o but under 45o or less over the stern. Then the swell tries to make the ship both to roll and pitch and that leaves a sort of jerky movement at times while the stabilizers do their work. But we were running away from it and by late morning it got less and less.

The wind is already against us and that is normal. Although the Trade Winds are defined as blowing in the Caribbean Sea, Mother Nature does not care about what Human Conventions decree and thus we have most of the time Trade Winds above Cuba and Puerto Rico as well. Only when there is a grave frontal system or hurricane coming over then the winds over here can change to the North or Northwest. But at the moment all is well in the world and the ship plows against 20+ knots of wind and about 0.5 knots of adverse current. Costs extra fuel now, but we will get it back when going the other way. At the moment the weather looks good for the next 5 days and hopefully that will remain for so the 5 days after that. 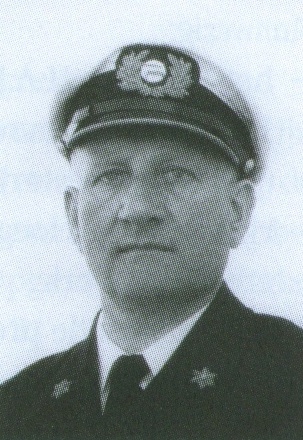 Captain Verhoog in a 1948 Photo

Those easterly winds caused Columbus with his 3 small ships to be blown this way towards the Bahamas. As a result he ran aground with one of them on San Salvador Island. At least that is what on average people accept as being the gospel. Thus on the island they built a big statue for him as there was somebody who even knew the correct spot of the landing (Maybe he/she was there when Colombus arrived)

However in the 1950’s there was already some misgiving about it,and one of our own Captains, Commodore Piet Verhoog calculated by using current and wind information out of the old log books that Colombus should have landed much more to the south. Recently scientists have been putting all the available data from centuries of log keeping by sailors (and those logs are very accurate) in a giant computer and started number crunching. And now it seems that our Holland America Line captain was correct, although the verdict of which island it exactly was is still out. Captain Verhoog was not universally loved for this non traditional Columbus views, but if he is looking down now upon us from his Bridge in the sky then he should be happy to know that common sense and letting the numbers talk does work in the end.

Tomorrow is our 2nd sea day and by late evening we will make land fall of the first Caribbean islands. Weather for tomorrow, same as today. Sunny windy warm and Sun Block 40.