Sometimes I miss being on the bridge and playing with the ship. This morning I was quite happy that I made room for a younger captain and became Fleet Master. At 03.30 my cabin started to shake and I knew the ship was slowing down for the pilot station. This meant that the captain had been up there for at least for 30 minutes, most likely more. So a very early morning, followed by docking and then maybe a two hour nap because by 0830 hrs. The USCG would be standing outside his cabin for their CVE inspection. (Control Verification Inspection). That means he would be at least in full swing until the drills were over near 11 am.  All with items that had nothing to do with his regular day. Luckily sailing out this evening only takes 30 minutes and then he should be able to put his feet up. I have never seen that scenario played out during an episode of The Love Boat………………

Getting into Fort Lauderdale has basically one major challenge and that is getting into the entrance. That sounds a bit corny but with this port it is THE major complication. Once you are in, it is just following the channel and either swing around in the turning basin or head straight for the dock.  The problem with pointing the nose the right way between the breakwaters when going in, has to do with the Gulf Stream current.  Everybody knows roughly where the axis of the current is (there where the most velocity is) located but it is nearly impossible to predict how the current strength tapers off from the center.

The Gulf Stream can run close to the Florida side or all the way at the Bahama bank side or somewhere in between. When it is not right on top of the Ft. Lauderdale sea buoy then there is normally a counter current running south. Normally, but not always. So when the ship lines up, the Gulf Stream should set the ship to the North and then when coming closer it should be set to the south with this counter current. But not always. Sometimes this counter current is not there at all and the Gulf Stream influence is much stronger than it should be based on the distance from the Axis. 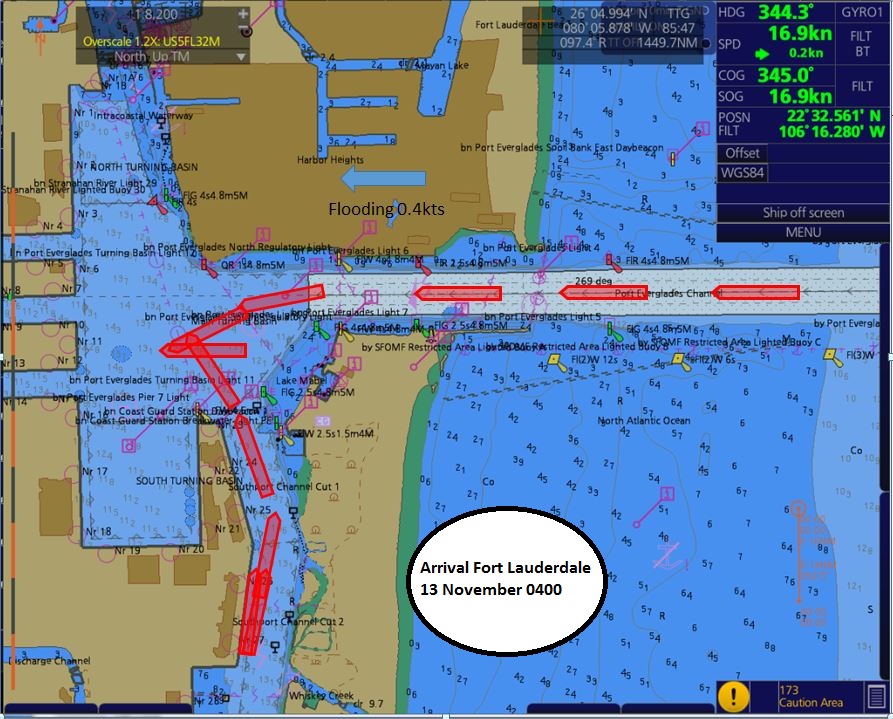 The ships movement of this morning. The ship will remain under the influence of the current until it is completely inside. After that moment the ebb or flood current and the wind are the most important factors. On the top right is the ships heading. course of 344 this is the heading of the dock once the ship has been safely moored. There is always a slight anomaly  between the HDG=Heading and the COG = Course over the Ground as the  COG gets constantly input from the GPS system and that gives minute fluctuations.

Thus lining up properly is always an exciting moment. The pilot will try to figure out what the current is doing right on top of the Sea buoy but as he is in a small pilot boat which does not have much draft, the set, if any, will not be the same as when a ship goes in with 7 or more meters of draft. (Fort Lauderdale accommodate tankers with 30+ feet) So what each captain tries to do is line up early in the Leading Lights and watch the set. When the closest leading lights (top and lower light in line) open up, then the drift angle of the ship (the heading of the ship and the direction the ship is really going) is lessened or increased. Depending to what side the Leading lights open up.

Thus when the pilot comes to the bridge, he already has some idea of what is going on as he saw the ship laying in a certain way; and then the captain can explain how much course there was changed. The only spoke in the wheel can be if the ship has to make a lee for the pilot boat, to enable a safe boarding of the pilot, and has to make a small or drastic course change. Therefore the pilot boat normally comes out as far as possible to have the pilot early on the bridge while the ship makes the final line up. Once Captain and Pilot are both happy with the way the ship has settled for the start of the approach, the pilot can then take the conn and bring the ship into port. Taking the Conn is different than taking  Charge. Conning means giving direct rudder and speed orders. Being in charge is having the final responsibility and that always remains with the captain. Some pilotages call the work of the pilot having the Conduct of the ship.

In some ports the pilot is (due to local law) required to take the conn, in other ports the pilot is allowed to let the ships navigation team do the sailing in and monitors the situation to ensure the ships teams navigates within the safe parameters of the port. In most ports the bridge team prefers to do it themselves but Fort Lauderdale is slightly different as the pilots see our ships all the time and have almost the same intimate knowledge of the ship as the captain. So the pilot brings the ship in, together with the captain he/she swings the ship around and then backs her up and once near the berth hands back again to the captain for the docking…………. And that whole procedure had me shaking in bed on occasion between 03.30 and 05.00

Tomorrow we will be a sea as we embark on an 11 day Caribbean cruise which will bring us back to Fort Lauderdale on 24 November. We will first have two days at sea and then have our first port of call Philipsburg St. Maarten. We have 1077 nm. to go to get there and thus two days at sea.

Weather over the Bahamas for tomorrow: Looking at the infra-red chart we should have a bit of rain while traveling in the beginning with a bit of wind inside the clouds. The weather front reached us today just after 12 pm. and it will be some time before it is over. Luckily we are traveling the other way. 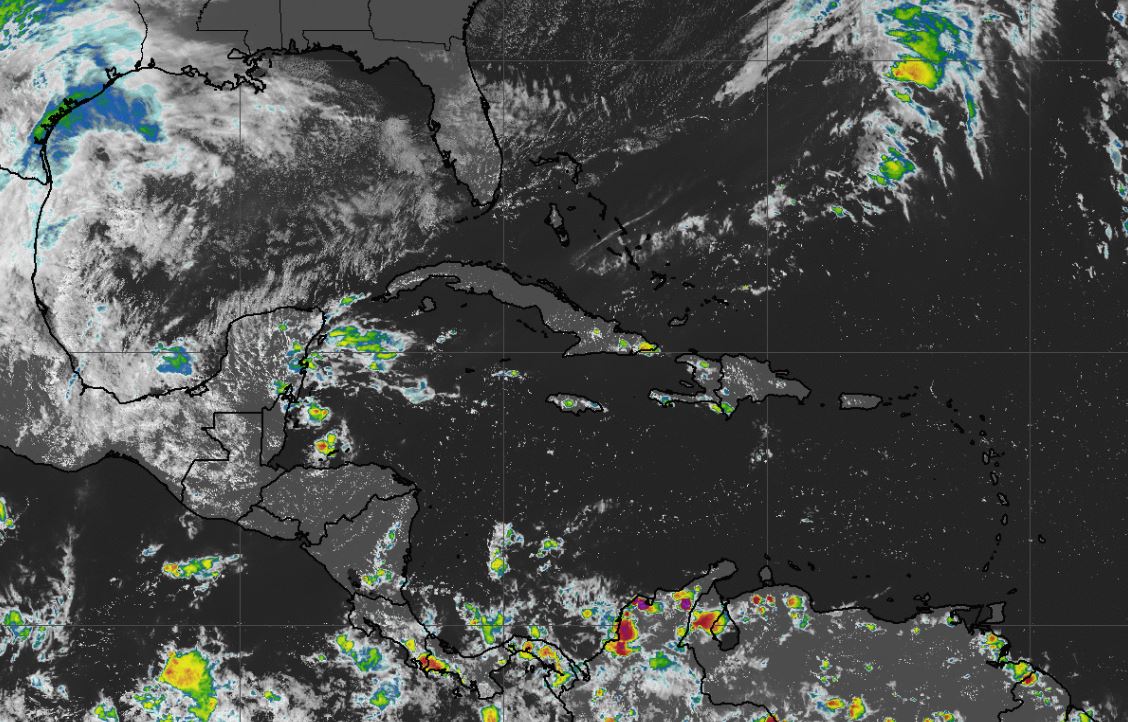 A different weather chart this time. This is an infra red picture which shows the intensity of the rain. It looks like that we do not have to worry very much about rain as there are no green to dark spots.