Today is our last and final day at sea. Yesterday afternoon and evening the ship found the occasional bump in the road when a complicated wave hit the hull. These waves/swell were mainly caused by the confused wave pattern which was the result of the influence of the “Cape Hatteras wave field” and what had been there before and what was caused by the wind shifting 180o during the day. But for the rest a nice steady ship and all was well in the world. And with those seas around us we are now approaching South East Providence channel, where we will be in the lee of the Bahama Islands by about 1800 hrs. Then early tomorrow morning we will enter the Straits of Florida and aim for a 04.00 Pilot station time. And that means to be docked 45 minutes later.  Very early in the morning but the captain wants to be early to have as much time as possible to prepare for what is going to be a very crazy day. 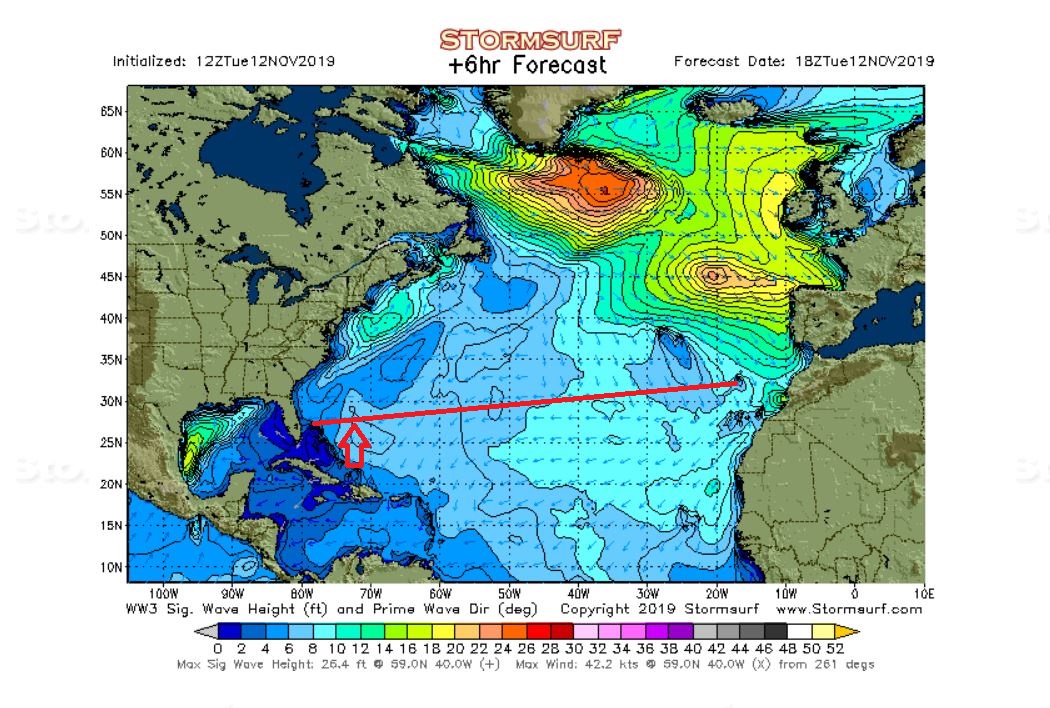 The last wave/ weather chart of this cruise. It almost shows the waves we had for the whole cruise. There is another wave field off the Gulf of Biscay which will affect the ships coming out of the Med now. Cape Hatteras is producing its next wave field and this cycle will continue for most of the winter.

The most consuming activities will be the various inspections that the ship will have to undergo. We have been away for six months and that means we have fallen out of every regulatory USA inspection that you can think of.  USCG will do a full Verification Inspection which will take the whole day. This means that all the crew will have to through the drills. That will take an hour and then for the remainder of the day groups of Officers will go with the Inspectors to conduct tests of all the safety systems on board (and we have a lot of those). We are expecting USPH as they are on a six month cycle. This means that groups of crew have to be at their stations (kitchens, bars, store rooms, potable water stations etc.) until each location has been inspected. And the crew will have to undergo a full Custom and Border Protection face-to-face inspection. That does not take that long for one person but with 900 crew having to go off the ship in groups and then coming back, it will have an enormous impact on the operation. The USDA will be there and they will be very focused on what we have on board and what we off load. European food stuffs cannot be offloaded in the same way as American Food stuffs. We try to make sure that everybody on board has eaten everything that is European and that all packaging had might have been contaminated by European products has been incinerated on board already. But they will be more vigilant and focused than when we are on a Florida to Florida cruise when everything comes from the American main land.

And then we are still a normal cruise ship. The guests have made a longer cruise that is often the case on the Koningsdam and quite a few are back to backers and that means more luggage too handle and to off load and then to fit in a regular turn over day as well. On top of that we have a lot of contracts with service companies who all will be eagerly waiting at the gangway and run on board to do their thing. Things are varied as tuning all the piano’s, checking all the coffee and fruit juice machines, to installing software upgrades in all the technical – computer driven – systems that we have on board (and we have a lot of those) Each and every one of them considers their presence of the utmost importance and the middle management will have to look after them as well, while having all these drills and inspections going on. Embarkation will start at the normal time and all the guests who have been accumulating in the cruise terminal will expect a full lunch available once they step on board. Long time cruisers understand that they might face a bit of a stressed out Cook behind the counter in the Lido, as he/she had to cook a full meal while at the same time having to attend USCG drill, CBP inspection and awaiting USPH. For those of you who read this blog, give them all an extra compliment tomorrow, as it will be a very busy day for them. 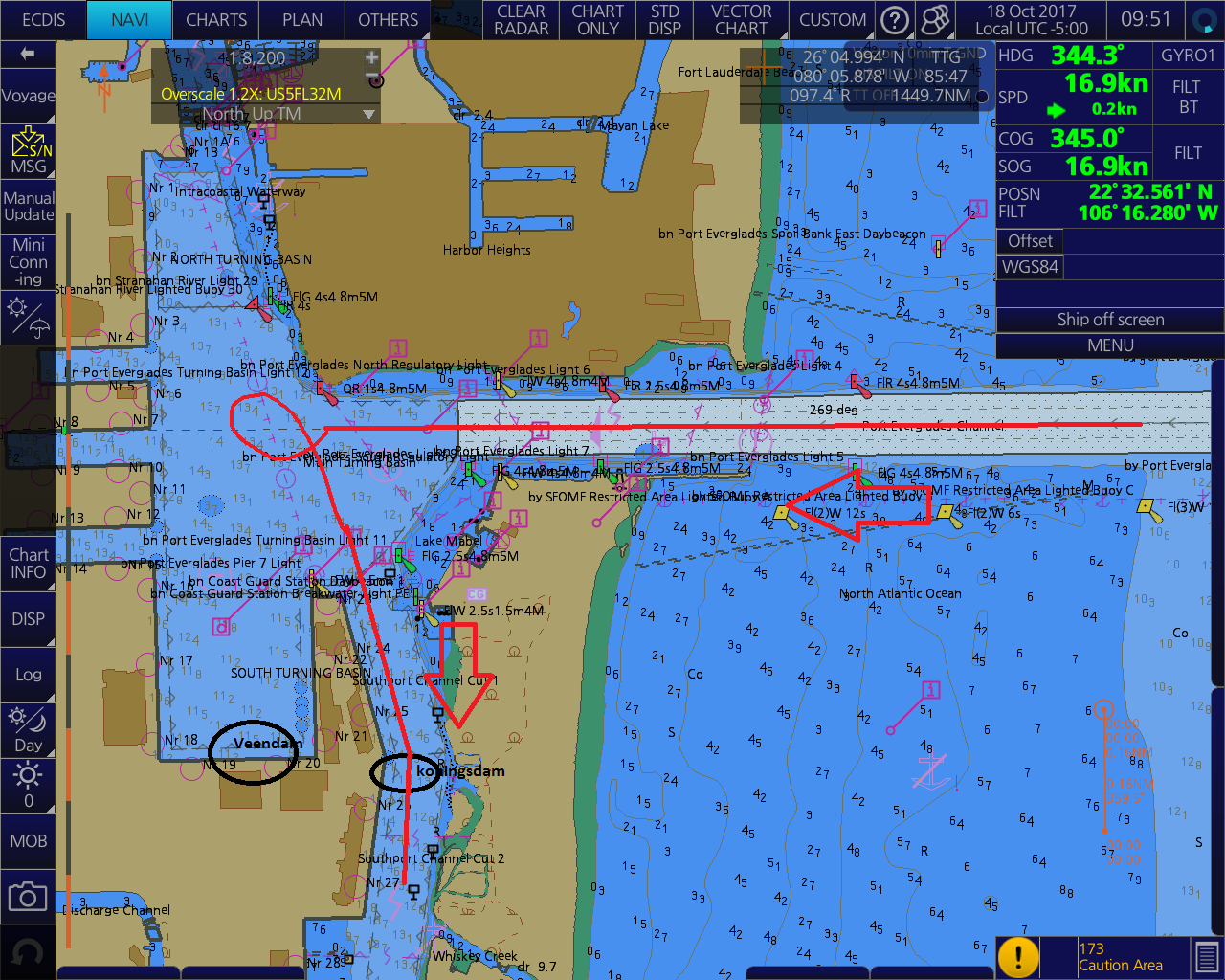 Instead of the map of Port Everglades, this time a screen shot of how the navigator sees the port

So we are arriving early tomorrow morning to set it all up and the fact that we are in port with only one other cruise ship, the Veendam, should make it a bit easier. CBP is always strapped for inspecting officers when there are 7 or 8 ships in, but now with 2 ships only, there might be a few more available to speed the process up as much as possible. So we will think positive thoughts and things will go fast and smooth. The Veendam is expected at the pilot station at 06.30 which is a nice gap in between the two ships. We will be at the regular Hal dock of pier 26, portside alongside and the Veendam is going to 19.

My activities tomorrow will be going through CBP inspection as a passenger, due to my visa status and change cabin. This time moving from deck 8 aft to deck 1 forward. My request for the penthouse has yet again been denied and I have to make do with what has not been sold. And that is apparently deck 1 forward this time.

Weather for Fort Lauderdale: it looks a mainly overcast day with noon temperatures on 80oF / 27oC. Then in the late afternoon a weak frontal system will arrive bringing a 70% chance of rain and an increase in wind. So for those who are moving between the ship and the airport and Vice Versa it will be warm but without the burning sun.  A good way to end what was a very good cruise. At least for the weather, but when I hear the compliments from the guests, also for the rest of it.