I am a happy man as the weather is following the forecast again so my predictions are still coming true. By noon time the swell was almost gone and now we are back to a breezy North Atlantic but with very low waves. Once in a while we still catch a small “bump” in the road but if there is anyone on board who would complain about this making them sea sick; then my suggestion to them is to attend Happy Hour. A few discounted drinks (with free snacks in the Grand Dutch Café) and you walk exactly in sync, with the minute movement of the ship. The wave chart below gives blue colors again and that means that all is well in the world. Please note that in the area around Cape Hatteras to the North West from us the next wave field is building up again, in the same way as ours did three days ago. But by the time that this new wave field would merit any focus and consideration we will be docked in Fort Lauderdale. As we have now 37 hours to go from the moment I am writing this and that includes 1 more hour back tonight to get on the Florida time zone. 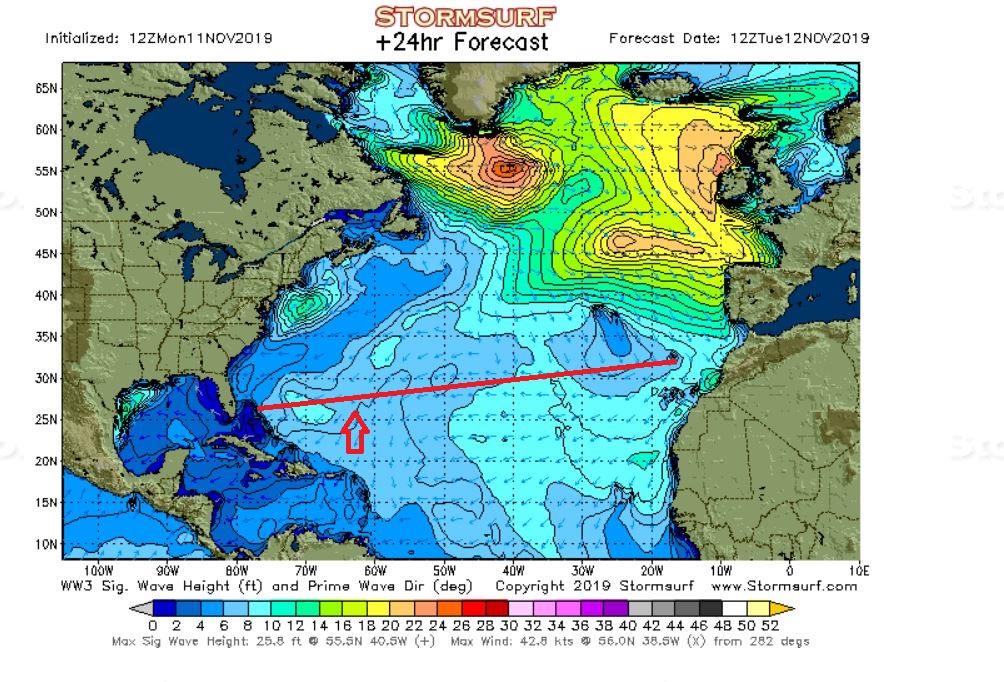 Same as yesterday, the weather chart is for tomorrow, the arrows gives our noon time position. 312 miles from Bermuda. We have now traveled 2560 NM since Funchal and we still have 746 NM to go.

Today was of course Remembrance Day and as the majority of the Guests are American, Canadian or British we make sure that it is observed. This does not mean that we do not do anything for other groups, we also pay tribute when it is Anzac Day and also for when it is the Day of the Dutch, 04 May.  That makes it sometimes a bit complicated for a Dutch Captain. Dealing with 11 November; in the same way as it would be difficult for a British captain to get into the groove for the Dutch 04 May.

As the Dutch Empire was never directly involved in the First World War, 11 November as a day it does not have that much significance for a Dutchman. It is more an Anglo Saxon thing. For the 2nd world war the Dutch choose May 4 as the day of remembrance and then the 5th. as liberation day.  Those two dates were sort of chosen, in a way that we had to choose something. This as the southern part of the Netherlands had been liberated much earlier. But the whole of the Netherlands was considered liberated on 05 May 1945 when the Nazi’s capitulated in the town of Wageningen. Right in the Center of the Netherlands. For our Far Eastern friends it is different again as the Dutch East Indies / Indonesia was free of Japanese occupation on yet another day. 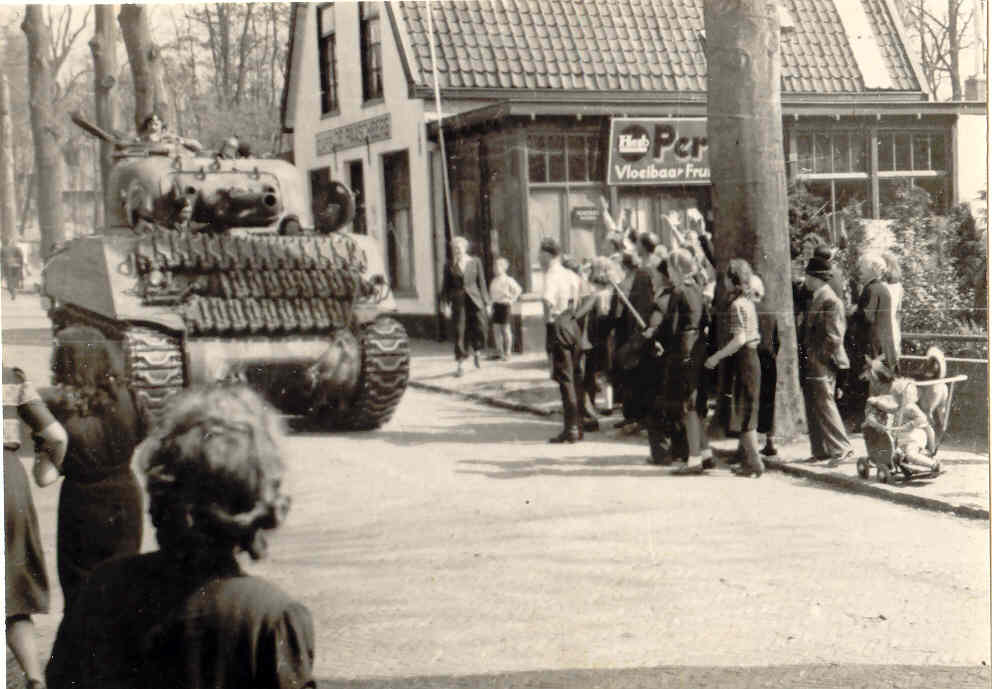 The Canadians rolling into my home town Ede in the Netherlands. After the Allied Forces came over the rivers, the Canadians were directed North while most American troops were directed East to race for Berlin to  keep the Red Army at bay. (Photo courtesy: https://data.collectienederland.nl/search/?page=132&rows=100&qf=edm_dataProvider%3AHistorisch+Museum+Ede&q=)

But we observe Remembrance Day on all our ships with a gathering of Veterans and Related and a Minute of Silence Ship wide. The company provides guidelines to ensure that there is the proper cerebral aspect to the proceedings and for the rest it depends on how many veterans and related there are on board for what is done. In the past, on my own ship, I organized it in the show lounge and one year the lounge was filled to capacity and the next year it was only a quarter full. (Which was quite embarrassing) And I never figured out why the difference as I made a lot of noise about it during the days leading up to it. Maybe in the years that there is a younger public on board the numbers are less; who knows.

I am from the generation from just after the war and I grew up with the stories, I knew all the Resistance people who had been in the war and survived; I had family fighting, I had family in forced labor camps, family in prison camps, family in hiding etc. etc. Then every year there was the remembrance of Operation Market Gardens and all the school children would bike from my home town to the moors (Ginkelse heide) to see the paratroopers coming down and we all had family who had been involved with that as well.

In the Netherlands there is an organization called “Keep them Rolling” and they restore 2nd world war equipment. They also re-enact  situations so often they are part of a liberation enactment. The houses look quite modern but if my local history memory is still good, these houses were built in the 1930’s so they would have seen the Canadians marching by. (Photo Courtesy: https://kruijffd.home.xs4all.nl/aarde/ede/

But in the Netherlands it is always less elaborate than in England as the Dutch only had one World War to remember and then later the Korean War and recently the Middle East. The British, together with the Commonwealth troops had been fighting everywhere and still are. My father in law was with Montgomery in El Alamein, my mother in law processed potential flyers for the RAF; her twin brother was in the Middle East, so was her older brother and her younger sister was a Land Girl. They were all involved and every family had casualties to remember.  Then since 1981 I extensively meet guests from the USA and Canada and from down under and they also have their stories to tell. Nearly everybody has been touched by war somehow; either directly or indirectly, and I do not think that is going to end very soon.

All those people need to have their deeds and the life they gave to be remembered.  And that is what we try to do also on the ships. And we ask also those guests who do not feel directly connected to observe the one Minute Silence ship wide. I do not think that that is much to ask. ——— 60 seconds for those who gave their lives———

This year in the 11th November Annual Festival of Remembrance service was on the evening of the 9th November at the Albert Hall in London, the Merchant Navy was represented by British Princess and Seabourn Officers which two companies are part of the Holland America Group. So it all stays close to home. The main  Cenotaph service in London is always in the morning.

Fort Lauderdale for Wednesday: partly cloudy with temperatures of 80oF / 27oC with a moderate breeze in the afternoon and 30% change of showers also in the afternoon/on. But we still have a day to go and the guests are moaning about their packing now.