The weather system with its wave front came our way and since lunch time today the ships moving a little bit more than before. But the forecast indicates that the wave field will veer away to the North East and thus by tomorrow morning, the little wobbles that we feel now, will be completely gone. See the wave chart below. This means that day 11 and 12 should be nice and quiet and tomorrow we can then see what the Weather in Florida will be. Normally a three day weather forecast is very reliable, unless there are hurricanes around but for Florida I prefer not to do any predictions until I am down to two days. The influence of the Gulf Stream is a major factor in the local weather and 72 hours is then a long period. 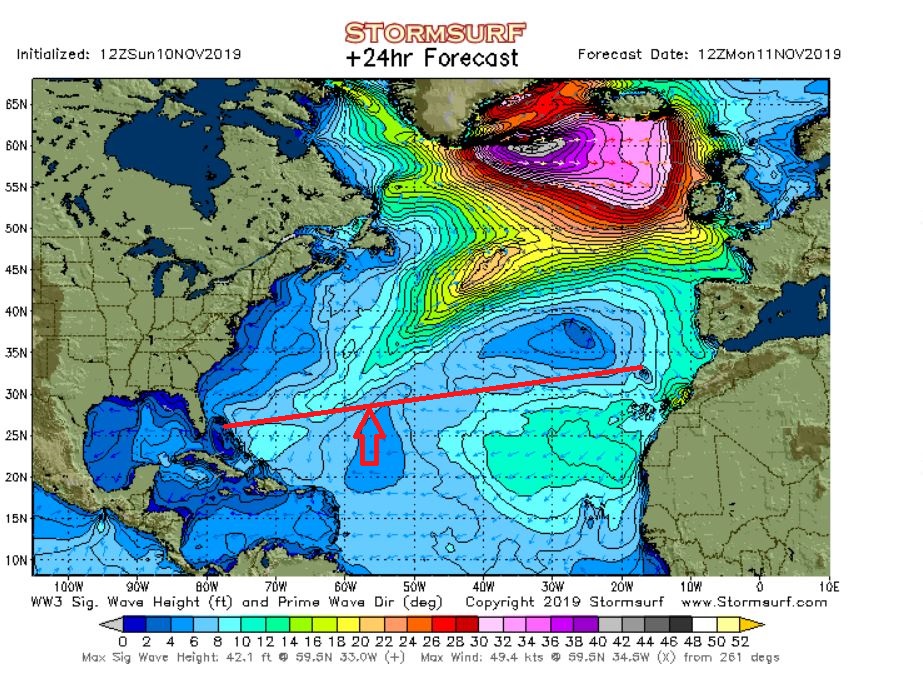 We have now covered 2148 NM. and still have 1167 to go while sailing 400 miles south of Bermuda. The arrow indicates where we are today. The forecast indicates the waves for tomorrow.  As you can see it is all pulling sway from the course lines.

A guest asked me the other day, what happens on a ship when we lose power. A so called blackout. A good question as with all the preventive measures that we have it still happens on occasion. When it happens it is most often a combination of hardware, software and human error. We call that an error chain. Something broke, the backup system failed and the manual corrective action was not taken or was delayed in being taken, or it was taken but did not work either. And then the lights can go out. Not for very long. At once the Low Level Lighting comes on. These are the light strips in the corridors. Light strips you also see in airplanes and which the stewardesses always point out before flying with that “both arm” up and down movement. Those light strips are really for a lifesaving emergency and will keep burning until the ship would sink. But with a blackout they click on as well, so everybody can still find their way and walk safely in the ship. 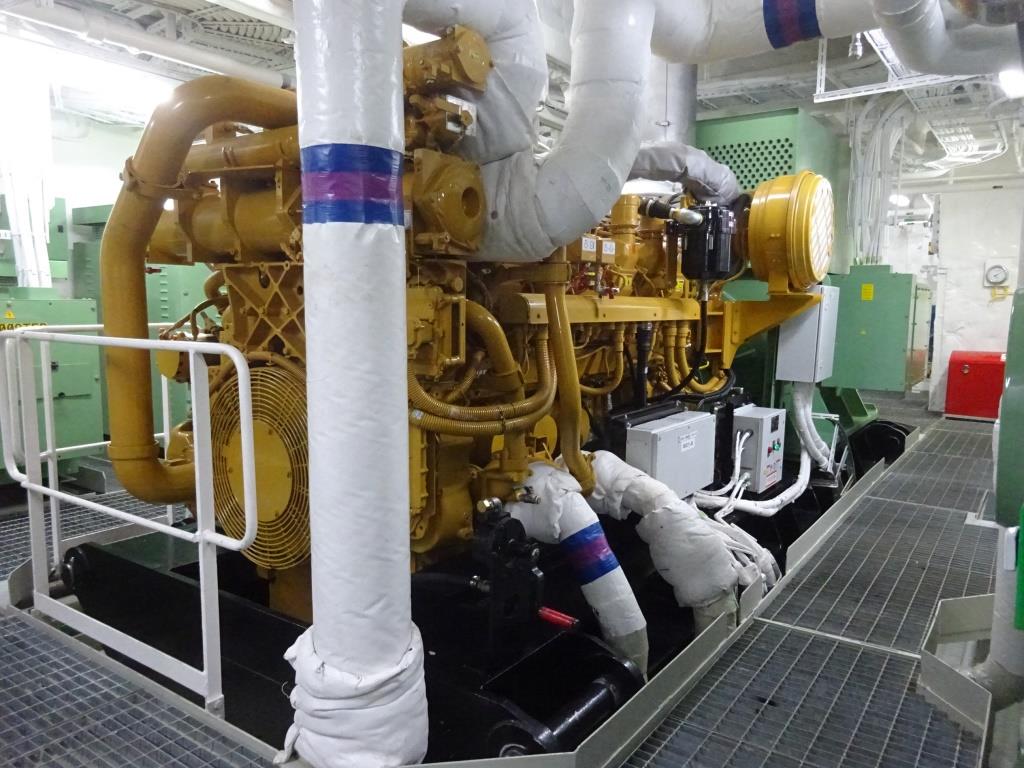 Our Emergency Diesel Generator a Caterpillar 3512C which generates 1500 HP and outputs 690 volts which then goes to its own Switch Board.

Within seconds one of the other main engines should automatically start and take over from the engine that faltered. If that does not happen then within 10 seconds the Emergency Diesel Generator EDG) would come into action. That engine is required to be strong enough to power all the emergency services which includes an elevator in each elevator bank in the ship. Ours is strong enough to power all the elevators in the ship, all the lights in the ship, and half the kitchen as well. It cannot keep all the toilets and air conditioning going as well. But that is not a requirement under SOLAS. The emergency generator is located on the Koningsdam on deck 10 well away from the engine room so if there is a problem, then the EDG  would not be affected. The other ships have a 2nd auxiliary engine on board to make it possible to restore Air-conditioning and Toilet systems and Galleys as well. 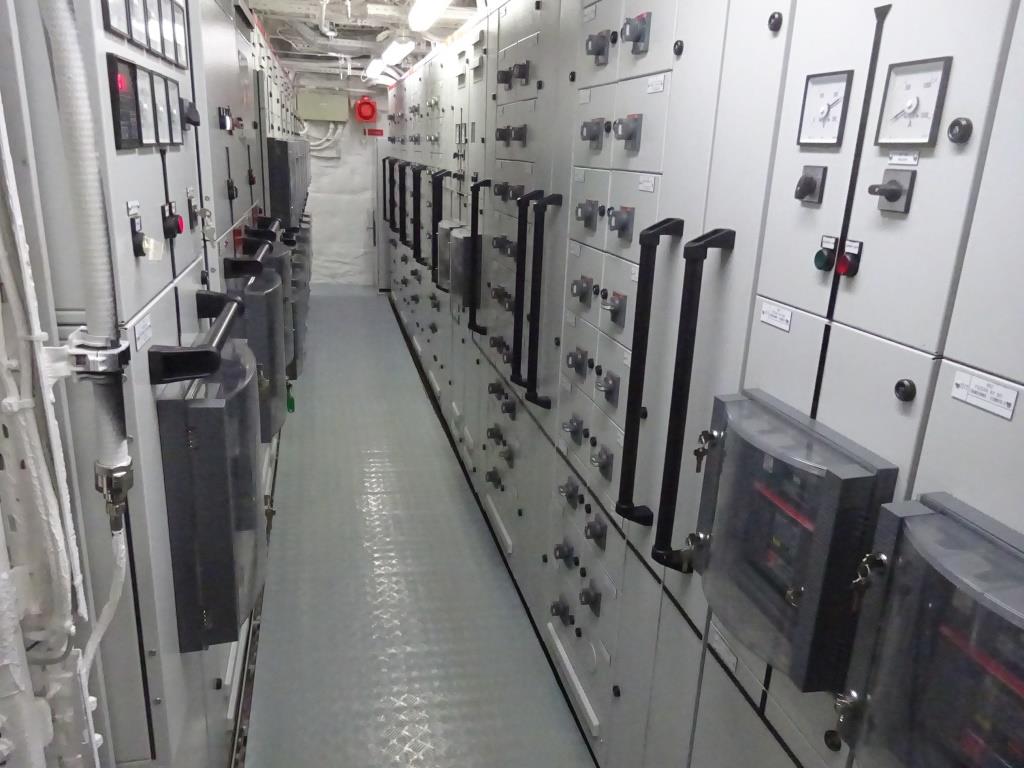 The Emergency Switch Board for the EDG. Larger than some of the cargo ships out and around us.

The Pinnacle Class has something different. It has been constructed under the Safe Return to Port (SRTP) design. This means that if one engine room would be completely out of order and part of the rest of the ship as well, then enough redundancy is built in that it can return to the home port with most of the facilities still operational or having alternatives available. So if the Main galley would burn out then we could still use the Lido and could turn the Crow’s nest into a secondary kitchen as the power and the infrastructure could be created in quite a simple way. There would be enough power for air conditioning and for the Vacuum toilet system. This works because it is all vertically separated. AC systems work vertically in Zones, so if one safety zone would go, the other zones would in principle not be affected.  There could always be the –most unlikely- situation that both engine rooms would be out of order but then the EDG is still there.

The EDG is required to run weekly “under load” which mean that it is really delivering power to the ships network. When the power is added to the Ships Grid, the bridge always makes the announcement to stay out of the Elevators as there can be a moment of a power dip. If the system would then not come back, all elevators descend to Deck 3, the embarkation lifeboat deck and most guests probably were not going there and could be concerned if that would happen. Hence the announcement. Normally nothing happens and we see many guests happily ignoring the announcement and wondering what the problem is as they simply go to where they want to go. EDG testing or not. 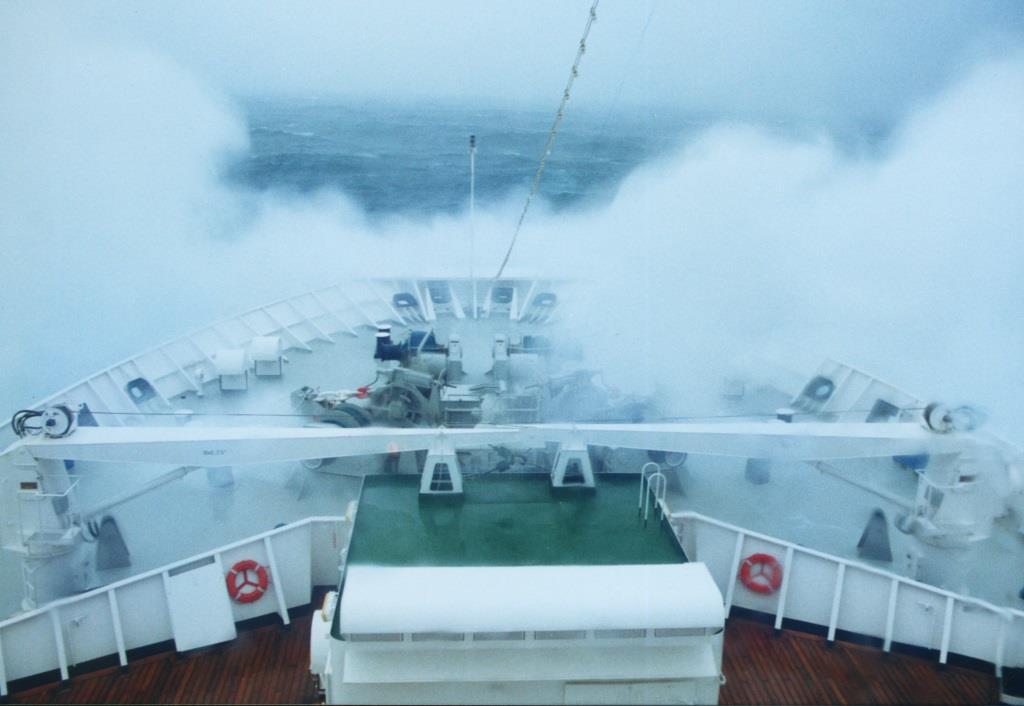 A photo from the ms Noordam in 2001 during her autumn Trans Atlantic crossing back to the USA in roughly the same area as we are now in. Things were not always as good as this time.

Tomorrow is another day at sea. But with this weather front moving over and away, it will be more overcast with a greater chance of showers. I am quite happy as the front is moving away to the North East and thus we will miss most of the wave field. Some guests might enjoy a good North Atlantic Storm but the majority won’t. Especially as the Show room – the World Stage – is in the bow and it is not much fun to see the stage heaving up and plunging down with one or more entertainers trying to give the impression that it is all normal.