Another nice day at sea with the sun shining. We did have a shower in the morning, when the ship sailed through a narrow band of rain. This time it was the ship that caught the shower but in the last few days we also had showers catching up with the ship as it was blowing harder than the ship was traveling. On land it is not always easy to see how fast a shower is coming your way but at sea where everything if flat and open, the edge of the shower is quite often very clearly defined and you see a vertical curtain of dark matter coming closer. Rain is not dark, except in maybe very polluted areas but as the rain is dark due to the condensation moisture inside, it looks darker than its surroundings. Most guests who were exposed to it, ran inside for a cup of coffee and were then back again to catch some more sun. 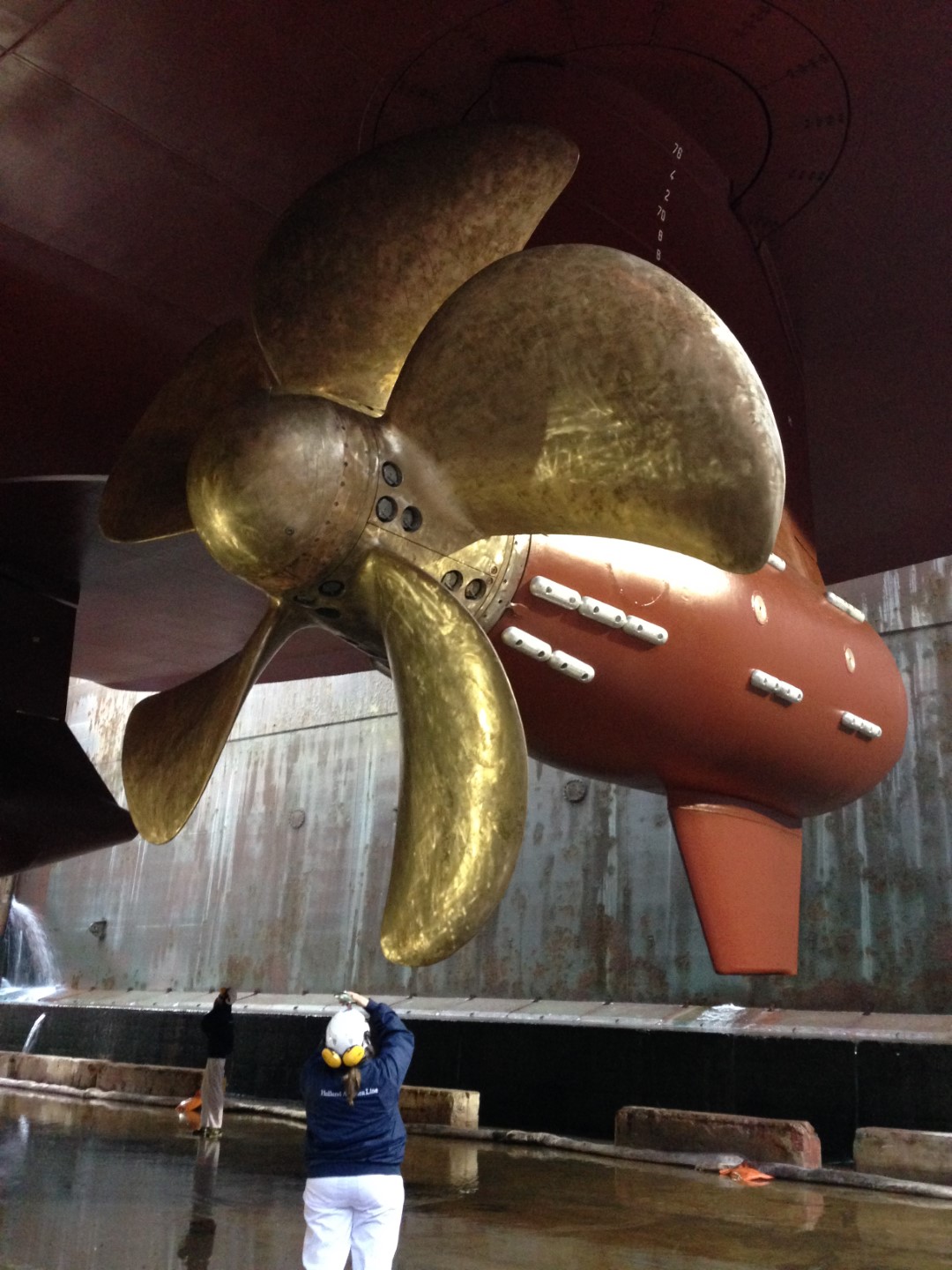 One of the Azipods of the ms Koningsdam. This photo was taken by an unknown deck officer during the recent dry dock of the ship. The propeller still has to be polished before the ship goes back into the water.

Today my travels continued through the engineering spaces. And that meant visiting the propulsion rooms. Since a long time (since 2000) the large majority of the cruise ships have POD propulsion. No more regular propellers, no more rudders, no more stern thrusters. All these things are now combined in a Pod which hangs under the ship and has a propeller attached to it, a sort of outboard boat engine. It saves on construction difficulties with the stern of the vessel and because they can turn 360o it greatly increases the maneuverability of the ship as Pods can by rotating their thrust push in any direction. Because of the size of the Pods and the amounts of power they can handle, they have their own Engine room with its own Electrical Switchboard which we call the Pod Converter room. Here the electricity, coming from the Diesel Generators, is re-aligned for the Pods. Mainly because the amount of power supplied varies depending on the speed required. 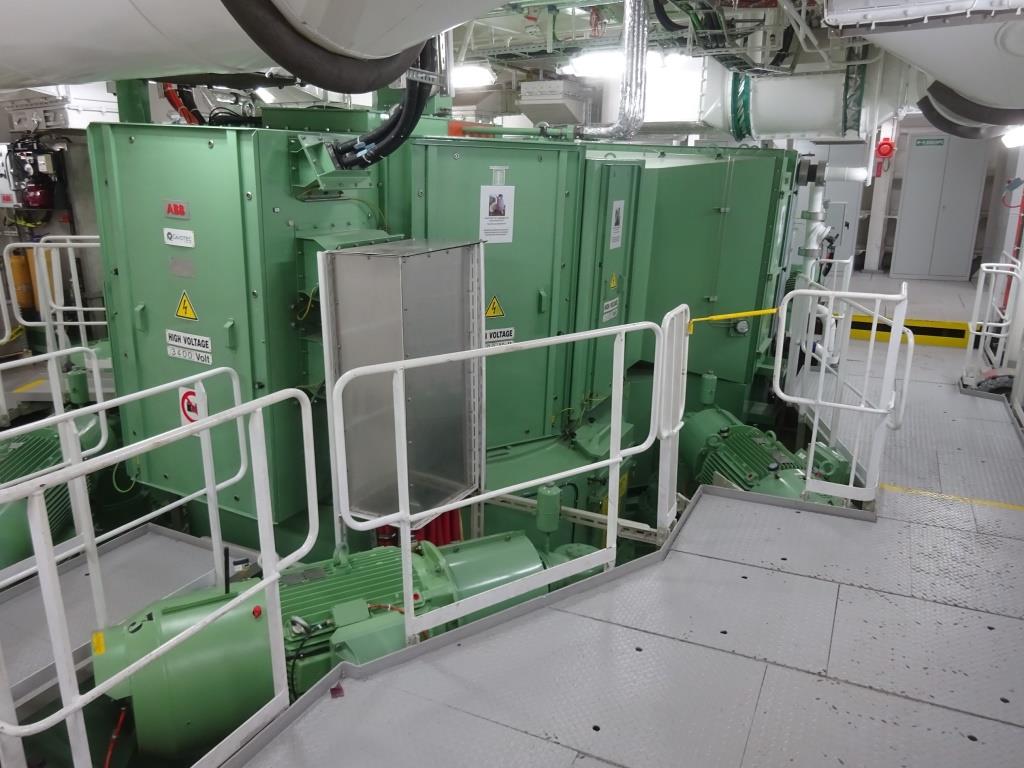 This is the part of the Pod that is sitting inside the ship and passes on the power to the Pod below.

The machinery plant of the ms Koningsdam can generate a total of 68,660 hp. and of that total power 14,000 KW (is just over 15000 hip) goes to each Azipod. So just under 50% of the total capacity can go to the Pods depending on the speed required. And that would be required when the ship would reach its top speed of just over 22 knots. Normally the top cruising speed is around 18 knots. But if you take in consideration that for the ship of this size the stern thruster output would be around 9000hp. You can see why the captains like Azipods, because they give soo much more power when going sideways. To such an extent that with very windy weather the captains sometimes go into port with the stern first so they can use the maximum power of the Pods against the wind and then bring the (weaker) bow in later with the bow thrusters. That always used to be the other way around. 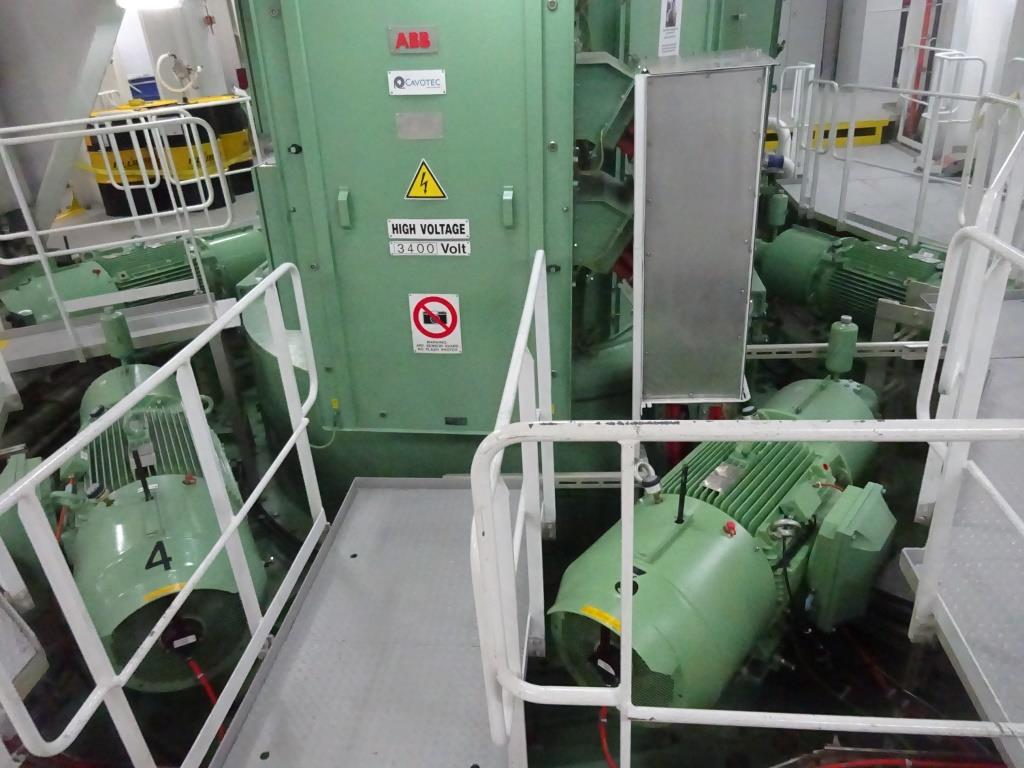 The pod is then “steered with four heavy electric motors which get their input signal from the steering stand on the bridge.

Thus the Pods with inside an electric motor are hanging under the ship but they are not sticking out. They are just above the horizontal line of the keel. The power is transferred via a slip ring system coming from the supply on top of the Pod in the Azipod room. 4 heavy electric motors turn each pod so the propeller can be directed to pull the ship in the right direction.  Normal propellers push the ship, but Azipods, as they can turn 360o, pull the ship so they get the best water flow by sitting in front of the Pod itself.  Most ships have 2 pods as that is needed with greater speeds and maneuverability. But at slower speeds the ship can easily sail on one pod, as one pod “steers and pulls” the ship as well as with two pods. A ship such as the Queen Mary 2, which has to maintain a high speed North Atlantic schedule, has 4 Azipods, but only the two other ones can turn and take care of the steering, the inner two are just for the pull for more speed. I do not exactly know where the top capacity for Azipods currently lies, but if a cruise ship would be needed with even higher speeds, then maybe it would have 5 or 6 pods, in the same way as you see very fast speed boats having more outboard engines. 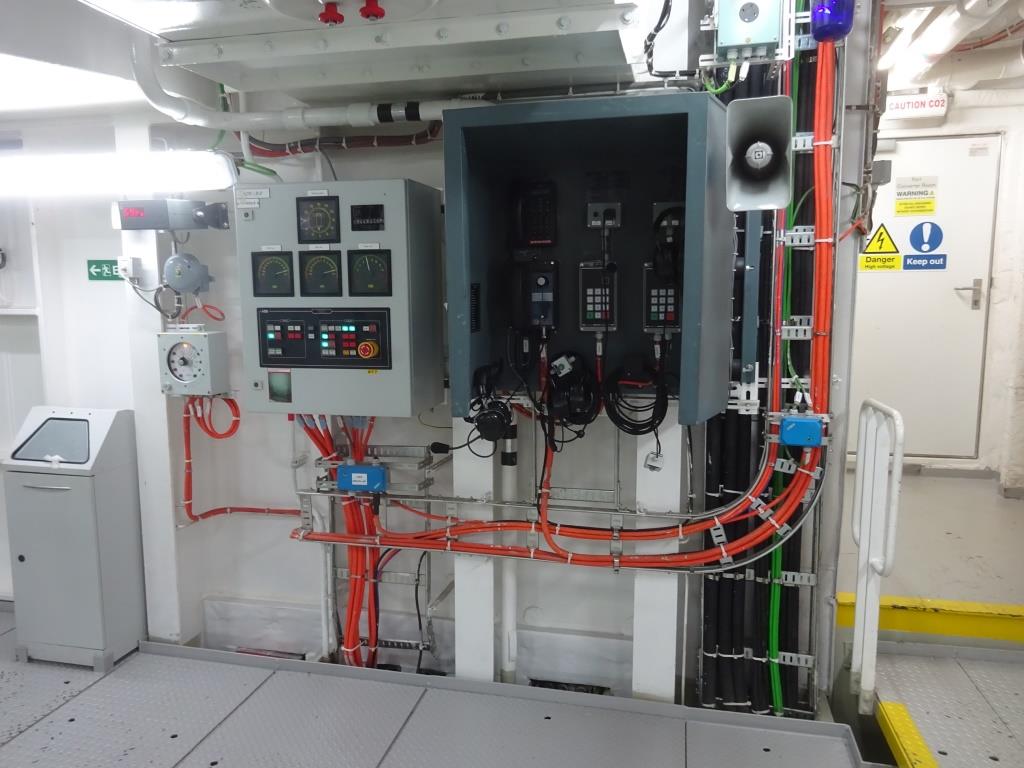 If direct signalling, direction input fails then we have manual back up. To the left the telegraph indicating the speed ordered by the bridge, next to it the  Pod operation with its various options and then the telephone system which works separate from the ships phone system. Each phone has a head set with a cable so the engineer can walk away from the stand and still be in contact.

For our crossing the Koningsdam is currently making a speed of 17.5 knots which is just under the normal top cruising speed. That will bring us on time in Fort Lauderdale on 13 November 2019.

As was my fear for Cape Hatteras, it has been churning out something and its wave field is coming this way. The chart below is the 24 hrs. prediction ahead of today’s position. The question is now will the wave field dampen out before it reaches our track line or not. Whatever it does, we will have a lot less problems with it, than if the captain would had gone for saving some miles by choosing the shorter Great Circle line which would have been a track higher up the ocean. Tomorrow should be another sunny and peaceful day, and in the mean time we watch Cape Hatteras. 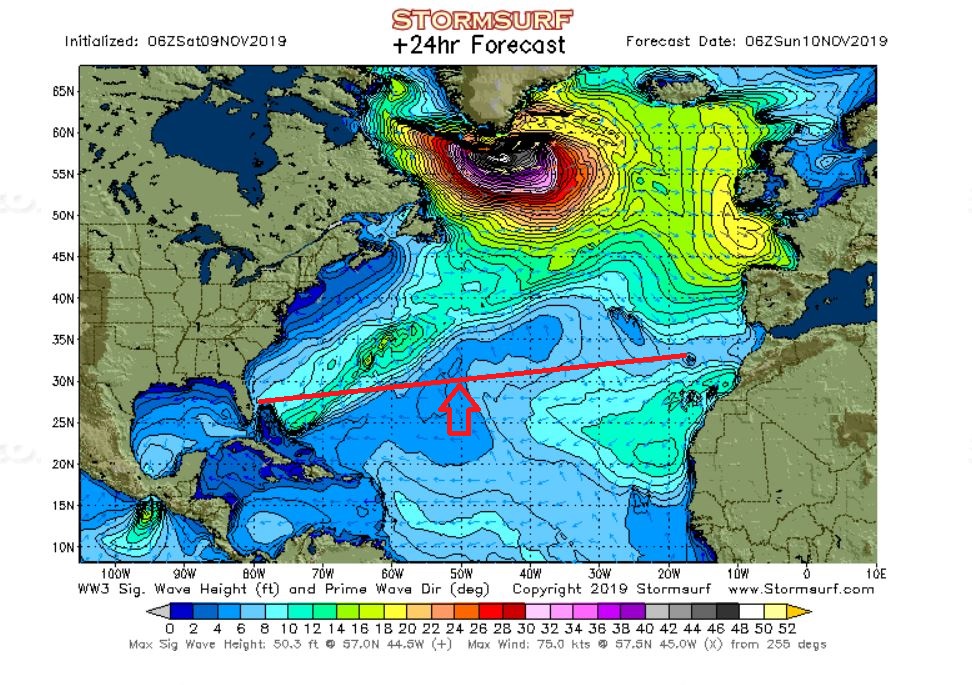 The wave prediction for the next 24 hours with our current position at the arrow.  As you can see things are not very happy again under Greenland with a prediction of 40 feet or higher waves.